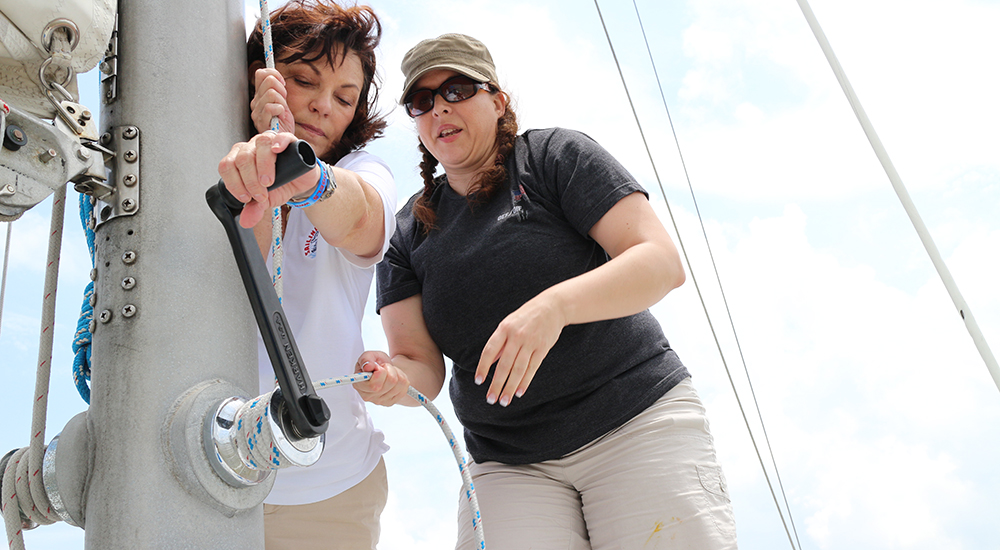 Sailing outings are part of unique recovery program for Veterans

When weekly therapy is not enough to tackle trauma, WISER and ROVER takes treatment to the next level.

Created in 2008 by Dr. Deleene Menefee, Women’s Health Program Manager, Women’s Inpatient Specialty Environment of Recovery (WISER) and Returning OEF/OIF/OND Veterans’ Environment of Recovery (ROVER), are five-week inpatient trauma programs that each accommodate up to ten patients. Veterans live on a psychiatric unit on the sixth floor of the Houston VA Medical Center.

WISER helps women Veterans of all eras, while ROVER focuses on post 9/11 male Veterans who have a combat-related PTSD diagnosis. The treatment is intensive, but the benefit is that as an inpatient program, it’s a controlled environment with 24/7 support.

“Instead of doing one session for an hour and then coming back a week later and saying, ‘Where were we,’ they set aside a month just for themselves, lock the world out and get it done,” said Claudia Mullin, LCSW, and WISER social worker. “It’s like a year’s worth of therapy in about five weeks. It’s an excellent way of dealing with trauma, but they must be ready for it.”

“Before I went to the WISER program, I wasn’t living,” said Navy Veteran Monica Delano. “I was just existing. I was also in a very dark place. The program, although challenging at times, ended up being one of the best decisions I’ve ever made.”

Veterans must be ready to deal with a lot of emotions that bubble to the surface during cognitive processing therapy (CPT), which is done in both one-on-one therapy with a psychologist and in peer groups.

“The groups are powerful for them to find out they are not the only ones,” said Mullin. “To hear that from other Veterans is very freeing for them.”

CPT stirs up the Veteran’s emotions by making them talk about the details of their trauma. Dialectical behavior therapy (DBT) skills help them make sense of those emotions.

“DBT teaches them skills to deal with those emotions so they can survive and think straight,” said Mullin. “It helps them at least be able to breathe. We get them to focus on other things and teach them how to bring themselves down. The flashback is not real. This is real (she taps the desk in her office). And they go, ‘Oh, I can do this. I can survive this. It’s not real. I’m not in war again. I’m not in a rape again.’ That’s what DBT is about … to give them the skills to manage their emotions.”

“I was taught several skills that have helped me move forward from events that happened in my past and help me overcome issues that I face in the present,” said Delano.

One of the DBT skills they learn is called STOP—stop, take a step back, observe, and proceed mindfully.

“A lot of times your emotions are high and, of course, your behavior will follow those high emotions,” said Chassity Brantley, LMSW, and ROVER social worker. “In combat, you needed that. You needed to be on edge because you had to react quickly. But unfortunately, they continue that on-edge behavior as if they are in war during regular life. This gives you the opportunity to hit the pause button, stop what you’re doing, and proceed mindfully. Don’t go from zero to 100. Take your emotional pulse.”

Happiness for the first time in years

Mindfulness is a term that comes up often during therapy and it means being in the moment.

In session, patients will be given candy and told to think about it as they eat it. What do they taste? What do they smell? What types of texture do they feel? The idea is for them to get in touch with their senses.

“Mindfulness is a practice,” said Brantley. “Practicing it allows Vets to be more in touch with their emotions. It’s not just zero to 100, I got angry, I blanked out and don’t know what happened. Because you practiced mindfulness, you are more aware. My heart is beating fast, I’m beginning to sweat, I’m clenching my fists. Now, you’re more in tune to what’s going on inside and you can stop it before you get to that point of aggression.”

“The other beautiful thing that happens here is we see the kid in them come out,” said Mullin. “Suddenly, being mindful and in the moment, they laugh. They’re having fun with one another. If you are mindful, and in the moment, you can enjoy instead of walking around numb. Some actually are able to experience happiness for the first time in years.”

Communicate in a positive way

Staff also teach patients interpersonal skills to communicate their wants and needs in a positive way.

“You can learn how to get your needs met without screaming or avoiding conflict because you’ve lost trust in yourself,” said Mullin. “Many of our Veterans think, ‘I can’t talk. I can only scream. I can’t say what I need. I don’t know how to say it.’ So, we teach them how to communicate their needs.”

Many Veterans who complete WISER/ROVER wonder why they’d never heard of these programs.

“They are just so grateful,” said Mullin. “They wish they had gotten this as they were getting out of the military instead of after they’ve got so much emotional scar tissue to repair.”

“We hear that a lot,” added Brantley. “Why wasn’t I offered this earlier? It’s just a matter of getting the message out there that we’re here to help.”

“ROVER was so much more than I expected,” said Army Veteran Matt Coleman, an Arkansas resident. “Going into it, I was nervous about traveling, living with strangers, and talking about my feelings. It was overwhelming, but you do come out of it feeling lighter. I came home with a better outlook of my future.”

“Among the Veteran population, male Vets ages 18-34 are at high risk for suicide,” said Brantley. “This is the ROVER population. Addressing PTSD within this program means addressing suicidality as well.”

In addition to therapy, Veterans have yoga, go on outings like sailing, bowling, steak nights, and a host of other activities.

Those interested in participating in WISER or ROVER must first be followed by a mental health practitioner. Once that happens, the therapist will determine if they are ready, then WISER/ROVER will do a screening to determine if they will be a good candidate. These services are available only at the Houston VA Medical Center.

“They have to get their toes wet in the beginning of the pool because coming here is like being thrown into the middle of the pool,” said Mullin. “It’s that intensive. They need to be ready to talk and show that they’re really interested in getting better, not just give me some pills and leave me alone, but serious about wanting to get better.”

“WISER is an exceptional program that I highly recommend to any female Veteran who is willing to invest in herself and do the hard work necessary to heal from past trauma and move forward in life,” said Delano.

Todd Goodman, is a Public Affairs specialist, at the Houston VA Medical Center