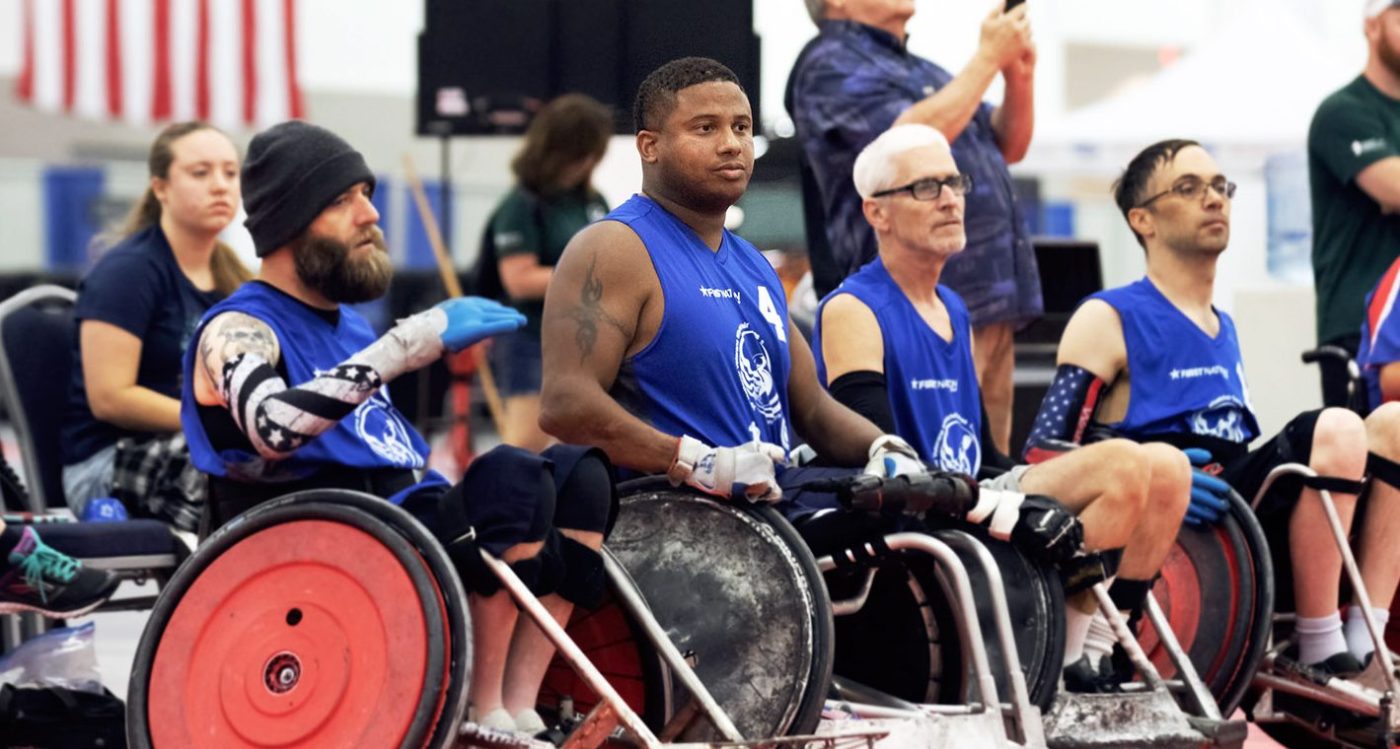 The enemy has already killed and maimed American troops with roadside bombs. Intel says the largest cache of explosives is right here. Major is part of the late-night raid to bring them down. This is where he wants to be.

He’s in the desert as part of a light infantry unit. As he and his team get closer, the insurgents wait.

Ryan Major loves rugby because it’s loud, fast and has lots of crashes. He is hoping for gold at this year’s National Veterans Wheelchair Games.

“We were two or three blocks away and I watched two squads cross that intersection,” he says.

He’s only a couple feet away now.

Major steps down with his right leg.

The enemy pushes the remote control.

The bomb explodes with a deafening roar, and fills the air with a lethal mix of fire and shrapnel.

“I was awake for the whole thing,” he said. “I remember going up and facing the stars.”

Major, 22, is blown up and over a steel gate and six-foot concrete wall.

His team, many with shrapnel injuries themselves, jump into their armored Bradley Fighting Vehicle, smash through the concrete and rush him back to the base camp.

“My guy, he had me laying on the floor and he is covering my leg. I’m losing blood like crazy. Trying to go to sleep. He smacks the p— out of me a couple times. I knew I was in a bad situation.”

“Read me my Last Rites. Tell my mom I love her,” Major says to his Soldier.

“No! Wake your b—- ass up! I’m not telling her anything! You’re telling her!”

They make it back to base.

“The surgeons and the doctors, they did their thing. Then they induced me into a coma.”

Doctors cut off his right leg and right thumb in Iraq. An infection while he was still in the coma took his left leg, two fingers on his right hand, his thumb on his left, part of his elbow and forearm.

Ryan Major races down the court on the way to a score.

And his nine years of dark depression begins.

Thirteen years after waking up in that hospital room, Major is one of the most vocal and energetic competitors at the 39th Annual National Veterans Wheelchair Games in Louisville, Kentucky, with quad rugby his favorite sport because it’s loud, it’s fast and there’re lots of crashes and smack talk.

“Hey, it’s sports. I’m a competitor. I was competing in the military. I’m competing still. It’s fast and I like to go fast.”

Major whips around with a white ball in his hand. A wheelchair cracks into him from behind and throws him from the chair and to the ground. He gets helped back in and shakes it off. Another chair crashes into him from the side as Major smacks down on his wheel into a backspin and then scores.

He crosses his arms, leans back his head and howls to the rafters.

He makes it look easy, but it wasn’t always this way.

“Dude, it was rough,” he said. “So rough, and I was in a really dark spot. A deep, weird depression. It was a lot of self-doubt and being hard on myself. It’s typical, going from a 100 percent independent man, having to depend on everybody for everything. That took a really big shot to my pride.

“It took me so long. I don’t have my legs. I can’t play football or anything I used to do and love. I used to play football. I wrestled. I did track and field. Now I can’t do any of that.”

His mom, Lorrie Knight-Major, said she and his brothers – Michael and Milan – along with Ryan’s friends, rallied to do whatever needed done.

“I credit his brothers, his family and his amazing friends who have been there all the way for him, and for all of us,” Knight-Major said. “To this day, he has a great support system. I wished every Veteran and every person recovering had that kind of love.”

Corey Fick, Ryan’s best friend since the 6th grade, visited him almost every day in the hospital and made him get out and about.

“If this happened to anyone but Ryan, I don’t think they could do what he is doing. He has no fear and is living life to the fullest.”

As Major watched others in a wheelchair living their lives, that’s when he knew he had to do it, too.

“I’m watching other Vets in my situation who had been hurt for a few years. They’re walking and talking and out having fun and I’m overhearing them. Why am I moping around when you got other amputees going out and having the time of their life?

“It was time for me to get my ass out of this bed and start getting active.”

Besides quad rugby, you can find Ryan Major kayaking and even skiing.

The first thing he did was the Hope and Possibilities handcycle race around Central Park.

“You hear people cheering you and that started to boost me back, but it was easy. I went back to my therapist and said, ‘What’s next?’”

He did it and wanted more. So he did the New York Marathon – 26.2 miles on a hand cycle.

“I was hurting bad. My fingers were cramped and locked in place. But I crossed that finish line and said, ‘God, I am a freaking trooper. I am the biggest bad ass in this whole, entire race!”

He hasn’t stopped since.

“I found out I can still do sports. I didn’t ski before I was injured. I had my first skiing experience in Colorado and didn’t anticipate liking that. They had me going down that mountain fast and I fell in love with it. I’m kayaking. I’ll do anything.”

Besides rugby, Major is competing in javelin, table tennis and even bowling this year.

“But I want that gold in rugby,” he said. “That’s the goal. Haven’t gotten it yet. Got close and made it to the final round once. I’ll get it.”

“I am so very proud of him,” his mom said. “I am amazed at the adversity he had to overcome. Ryan has always been a fighter. He wakes up every morning happy, and makes the most out of each day of his life.”

He sometimes thinks back on that day when everything changed, but doesn’t stay in that place too long.

“I still keep in touch with those guys from Walter Reed and with some of the staff. All these years back, and we still talk.”

It’s that brotherhood, he said, that makes these Games so important.

“I like to be loud out there and have fun. Other Vets look at me and that makes them proud. They say it inspires them. Well, they inspire me.”

Major just has one request if you see him on the street. Don’t call him disabled.

“I’m an athlete. And I hope when they look at me, they think I’m a good athlete. That’s what they can call me.”