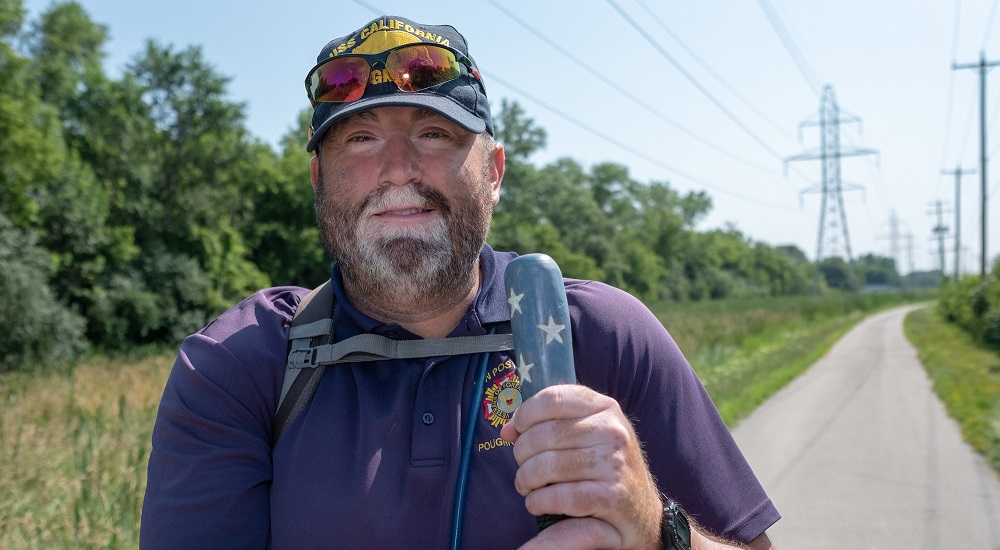 Veteran Tom Zurhellen was hoping to write a novel this summer. Instead, he’s walking 22 miles a day across the U.S. to raise awareness about Veteran homelessness and suicide.

Zurhellen is a Navy Veteran who teaches English at Marist College in Poughkeepsie, New York. He’s breaking his journey of about 2,860 miles into segments of 22 miles a day. The daily goal matches an [outdated] number of Veterans who commit suicide each day.

“I had a year off [for] sabbatical and I was just going to write another novel,” he said. “But then I got this commander job at the Poughkeepsie Veterans of Foreign Wars Post 170. I’m a Veteran, but I had no idea how much support was needed by our local Veterans with mental health and homelessness.

“I figured if that was happening in my hometown, it had to be happening all across the country. So instead of writing just another silly novel, I decided to use my sabbatical to embark on this crazy adventure.”

Since leaving Oregon in mid-April, Zurhellen has doggedly maintained his 3-mph pace through all kinds of weather.

“It was 100 degrees in Sioux City, 98 degrees in Beloit, I hit a snowstorm three or four times, sub-freezing temperatures, so yeah, I’ve seen it all,” said Zurhellen.

His journey brought him along the Hank Aaron Trail, which winds through the campus of the Milwaukee VA Medical Center.

He kicked off his walk through the Milwaukee metro area in a local coffee shop.

On hand to offer support was Navy Veteran Mike Waddell, who said he had learned of Zurhellen’s walk that morning on Facebook.

“I just figured I’d come down and show him a little love and encourage him, keep him going,” Waddell said. “I think what he’s doing is great.”

Erin Maney, a social worker at the Milwaukee VA, said raising awareness with a goal of prevention is extremely important.

“Every day, Veterans are getting the help they need. They’re doing it for real!”

“I think there’s a lot of media coverage when, unfortunately, there’s a Veteran death by suicide,” Maney said. “But there’s not always coverage when every day, Veterans are coming in asking for help, getting the help that they need, and going on to live meaningful lives. What he’s doing is extraordinary.”

“I think it’s an incredible journey to raise awareness for struggles that our Veterans face,” said Ganzenmuller, who also volunteers at Stars and Stripes Honor Flight. “It’s awesome that he came to Wisconsin.”

Zurhellen at the Milwaukee VA greeted by employees and well-wishers

In the early going, Zurhellen thought about giving up, but those days are fewer and farther between.

“There was a time up until about a month ago, I was hitting the wall at about mile 15. And I thought, ‘What am I doing, experiencing pain? It would be so easy to go home.’

“Their pain’s a lot worse than mine. I can go home anytime. It’s like I’m just playing at being a homeless Veteran, but they’re doing it for real. So, when I put in that perspective, it gets a lot easier.”

And with that, it was time for Zurhellen to hit the road and walk another 22 miles—a distance that to him means something far greater than just a number.

Jim Hoehn is a Public Affairs Officer at the Milwaukee VA Medical Center.