Alternative Adaptive: A look at cycling, fishing and more at the TEE Tournament 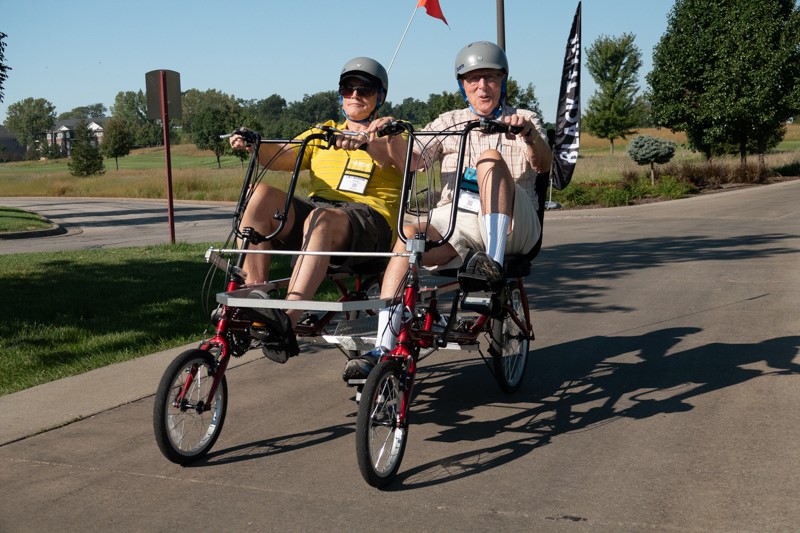 A big part of the annual TEE Tournament is giving Veterans the chance to build bonds with one another and introduce them to adaptive sports they can do despite any disabilities.

There was the female Veteran who was afraid of horses. She went horseback riding for the first time and couldn’t contain her excitement. Now she rides back home as part of therapy. There’s the blind Veteran who didn’t want to hand cycle. Or the quadriplegic who now climbs rocks. Or the guy who never thought he’d fish again after losing his sight. By the end of the week, he was so happy he was crying.

More than 260 Veterans living with blindness, amputations, spinal cord injuries, post-traumatic stress and other challenges will participate in this year’s National Disabled Veterans TEE Tournament Sept. 8 to 13 in Iowa City. TEE – which stands for Train, Exposure and Experience – centers around a week of golfing and wellness education, but one day is set aside for alternative sports activities. Those Veterans can choose one or more sports, including kayaking, scuba diving, air rifle, horse shoes and a lot more.

The event–in its 26th year–is cosponsored by VA and DAV.

“They’re all doing things they didn’t think they could ever do again,” Pierce said. “Either they think they can’t do it or they’ve never done it before. My guy on the adaptive bike, he does it every year now and laughs and smiles as he rides by me.”

There are more than nine alternative activities that will be offered during the event. In this two-part series, we’ll take a look at some of the sports Veterans can expect at this year’s TEE Tournament.

If someone told Air Force Veteran Jeffrey Frank he could ride a bike six years ago, he’d have two words for them: “You’re crazy!”

Five years ago, he got on a tandem bicycle at the TEE Tournament for the first time.

“Freedom, that’s what it felt like,” he said. “If someone thinks they can’t do it, I tell them maintain their cool and try it. The bikes are safe and the people operating them are very cooperative and very knowledgeable.”

“We’ll have 30 different kinds of bikes out there for people to try,” he said. “No matter the disability, I can get someone out there and riding,” he said. “It just kind of proves a point. No matter what’s going on, we can set you up with something fun and adventurous that you never thought you could do, or people are afraid to let you do.”

Werhane said Veterans can check out his array of bikes Tuesday evening and Wednesday, then cycle around the resort.

“We’re trying to change the culture here, to get people to realize instead of sitting around the house all day, they can ride around the block. They can ride to the park with their grandchildren. They’ll realize, ‘Why am I not on the lake with everybody else on Labor Day? Why am I not paddle boarding in Florida in January?’ We aim to prove to them they can do anything, they can rip it up and people won’t even notice the disability.”

“It just kind of proves a point. No matter what’s going on, we can set you up with something fun and adventurous that you never thought you could do, or people are afraid to let you do.”

Werhane will go a step further and connect the Veterans with cycling groups in their community and help them get a bike of their own.

“It is absolutely (saving lives),” he added. “People tell us that all the time. It’s tough to hear that but so gratifying to have that kind of impact.”

Every little town and every big city, it’s all the same.

“The great thing about bowling is it’s everywhere in every market,” said Wes Hodgson, a blind rehabilitation specialist overseeing this year’s event. “This is something Veterans of all ages can participate in, and we have all the adaptions to make it fun.”

A volunteer helps a blind Veteran approach the lane during bowling at last year’s TEE Tournament.

Blind bowlers will use adaptive rails at the event that will allow them to walk up to the lane and release the ball. Coaches can also guide and make adjustments. There’s bowling from wheelchairs, and for those who don’t have the dexterity to hold a ball, ramps to guide it down the lane and toward the pins.

“We have another guy who comes every year, he’s an amputee and he still bowls with one arm. Another person doesn’t have the motor skills to hold a ball, but they use their arms to shimmy the ramp and aim it just right,” Hodgson said.

“And if you’ve never bowled before and don’t know the rules, I guarantee someone sitting right next to you does.

“You figure a lot of people coming here are in their 70s, but they bowled on leagues in their 40s,” Hodgson said. “This is something they can still do. We have one guy who is legally blind, and he’s out there routinely bowling a 190.”

“Everybody has their own demons. This is an event that allows them to displace those ideas and focus and enjoy an activity,” says George Sadewasser, who is overseeing the fishing portion at the TEE Tournament.

“It sounds simple, but I have seen people’s lives changed going out on the water. Just being outdoors. The healing is priceless.”

For those not looking for the adrenaline rush of rock climbing, a little solitude on the water may be the perfect addition to add to a week of golf at the TEE Tournament.

He’ll take a group in the morning and afternoon out on the pond at the Riverside Casino, where they can try to snag catfish, blue gill and maybe a bass or two.

“It’s one of those experiences that if you have it once, pretty hard not to continue sharing that because it brightens a lot of people’s days. It’s something that perhaps make our Veterans feel normal for a day, or a week. There’s a huge amount of camaraderie and sharing.

A Veteran holds up one of his catches during the alternative sports fishing day at last year’s TEE Tournament.

“Most of the people who come out are independent, and just need a little assistance. I know a double amputee who comes out and still fishes. It’s just having that time on the water,” he said. “When you’re fishing, you don’t see fish bite. It’s all tactile. You feel it when the line has a tug, you feel the resistance. I can help someone bait a hook, but they cast, they catch them, they reel them in.”

Veteran Keith Barta of South Dakota figured his fishing days were over when he started losing his sight to macular degeneration. He said his blind rehabilitation team in South Dakota has kept him connected to the sport he loves.

“It’s been fantastic,” he said. “The first year I went out, I caught a 5-pound catfish. The other year, had a strong one on there and 30-pound line. It had to be a big one. Jerked the line three times then broke it, but that’s why they call it fishing. It’s still fun.”

Sadewasser said he loves giving those experiences back to the Veterans.

Check back tomorrow for a preview of the climbing wall, air rifle and horseback riding.