Nothing stops the ‘Quadzilla’ 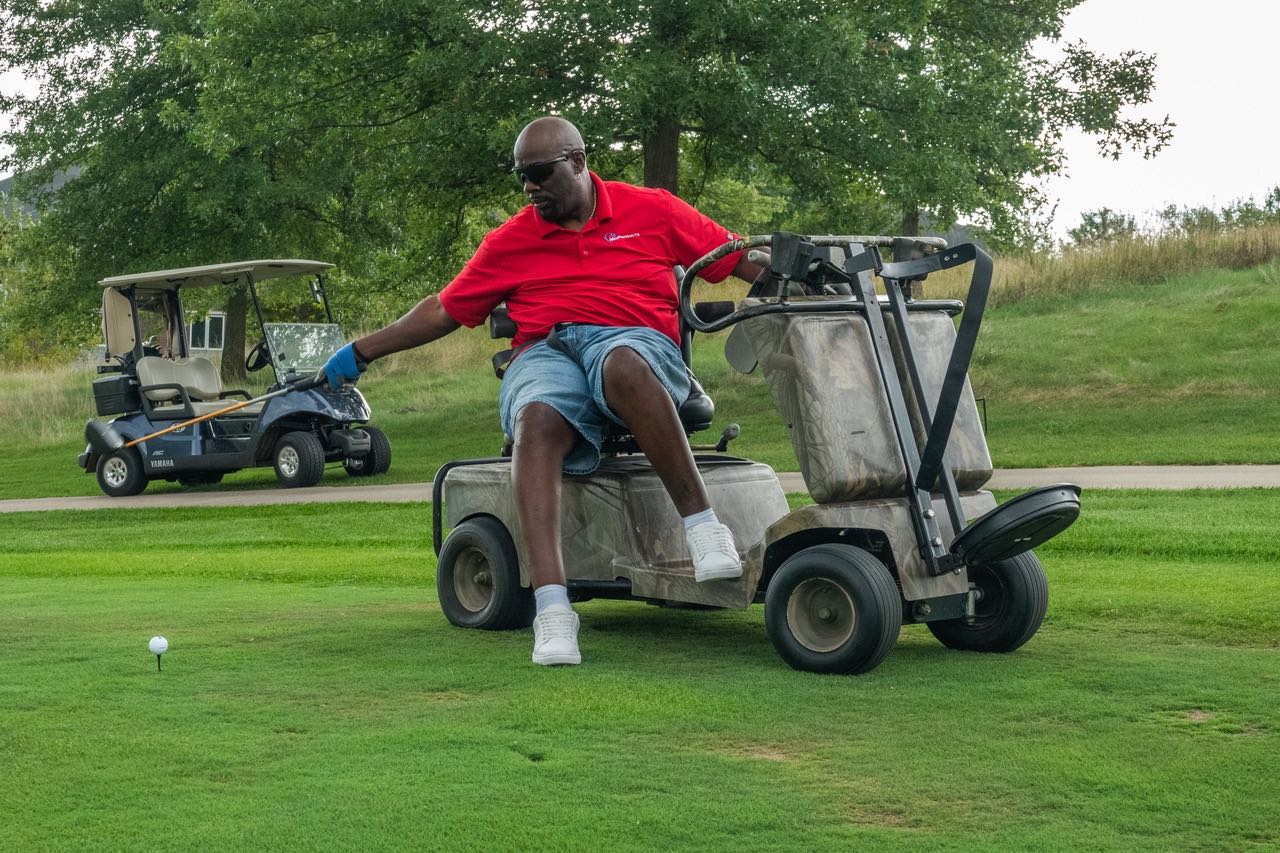 A car accident in 1987 paralyzed him from the chest down, and thus, Quadzilla was born.

Johnny Holland shows off the after-effect of swinging a little too hard on the golf course.

Army Veteran Johnny Holland, 54, has been in a wheelchair longer than he’s been out, but never let it hold him back and rattles off an arm’s length of sports he participates in: “Rugby, I do basketball, softball, tennis, bowling, table tennis, javelin, shotput, discus, surfing, sailing, kayaking, rock climbing. I just start bass fishing – the sky has no limit.”

Holland, who gets care at the Richmond and Durham VA Medical Centers, is golfing in a specially designed Solo Rider chair at the 26th Annual National Disabled Veterans TEE Tournament, presented by VA and DAV.

“I didn’t think I was gonna hit it, but ended up getting a couple of pretty good hits,” he said. “Ended up winning a prize for longest drive with one arm so that was exciting. Had to call back home to tell everybody and brag a little.”

Holland has participated in about 30 Wheelchair Games, skied at the Winter Sports Clinic, been to a Wounded Warrior tennis camp, and played in a 9-ball championship in South Africa.

Unlike other paralyzed Veterans who said they struggled in the beginning, he said it’s something he accepted early on.

“To this day, I can’t get a three-point shot, but if I throw it like a hook shot, I can get it every time. You just have to relearn different ways of doing things.”

“When I came out of my coma 10 days (after the accident), the doc told me I wasn’t going to walk. God gave me a peace of mind about it. Once I got back, start doing sports and life goes on. It’s what you make of it.

“I categorize people into three groups – you have the ‘Know it all,’ the ‘Woe is me,’ and the ‘One who wants to learn.’ I just figured as long as I was still breathing, I knew there was hope, and I was going to build on it.”

It helped that his initial rehabilitation was at the Richmond VA were Ike Cook, a double amputee and Vietnam Veteran, was his recreation therapist.

“We’d be playing football, and he’d be cutting around us, flying around corners. I saw a guy with pressure sores and said, ‘Whoa,’ so I knew what I had to do. I was still learning how to sit up and building up strength with a medicine ball, and other guys were popping wheelies in their chairs.”

Holland went to the rec room to see if he could throw a basketball.

“And I couldn’t even get it to the rim,” he said. “To this day, I can’t get a three-point shot, but if I throw it like a hook shot, I can get it every time. You just have to relearn different ways of doing things.”

“People would say, ‘You’re in a wheelchair, you can’t do this or that,’ but my dad did it. For me, it was an everyday occurrence.”

— Jovane Henry, on how her dad inspired her while growing up.

When he started hitting the weights after his accident, he was only able to bench 100 pounds, but eventually got a max lift of 425 at one of VA’s Wheelchair Games.

“And that’s how I got the ‘Quadzilla’ nickname,” he smiled.

Holland joined the Army at 18, and soon married his high school sweetheart, Shirvon, the daughter of a sergeant major at Fort Bragg, N.C. They had a one-year-old daughter, Jovane, when he had his car accident.

He said it helped that his father-in-law was a hard-charging soldier who taught him how to be successful in the Army. He took that same motivation into his new normal as a quadriplegic.

Holland said he tries to inspire hope in others who are recently paralyzed, but sees some paraplegics – those paralyzed from the waist down – who think life is over. He tells them if he can do these sports as a quadriplegic – paralyzed from the chest down – they can, too.

“To this day, I have friends, paras – they’re a little upset. They don’t want to take advantage of sports. They say, ‘I can’t do this. I can’t fly anywhere by myself.’ You can’t say you can’t. Because one day you’re gonna look back and wish you did. I flew all the way to South Africa by myself.

“I had a friend in Richmond, and I’d go to his apartment, and he had a couple cases of Budweiser and a couple case of Jack Daniels. I told him, ‘When you sober up, you’re still going to be in that chair.’ But he was hanging out with friends who weren’t really his friends. You have to surround yourself with people who have been what you’re through, or what you’re getting ready to go through, and they’ll get you through.”

Holland credits God and a great family support system for his success.

“I remember early on, my wife had to help me get dressed, and she wasn’t going fast enough for me, and I said something to her,” he said. “She got mad, threw my clothes at me and said, ‘Get dressed yourself!’

“So I got dressed in my chair. That push, had she not been pushing me, I might still be laying around.”

When he’s not working out, tackling a different sport or hanging out with family, Holland works part-time in the box office for the Carolina Hurricanes hockey team, and serves as a mobility consultant for a handicap-access van company.

Jovane, who served four years in the Marines, said it just seemed natural to see her dad in a chair.

“I have no recollection of him walking, but it kind of eradicated a lot of excuses for me. People would say, ‘You’re in a wheelchair, you can’t do this or that,’ but my dad did it. For me, it was an everyday occurrence.

“He was a substitute teacher for a couple years when I was in elementary school, and all the kids loved him, because he’d talk about all the sports he was doing.”

As a model, Jovane almost joined the Air Force, but credits her dad for a push in a different direction.

“It’s probably why I unconscientiously joined the Marine Corps,” she said. “My dad does the impossible all the time. So joining the Marine Corps, people said, ‘But you’re a model,’ and I still thought I could probably do it.

“And it was really hard, but it took persistence and hard work. I looked at it like an obstacle I could tackle, and said, ‘My dad can do what he does, I can do this.’”

That kind of talk makes Holland smile. It underscores his motto, something he says several times during the interview.