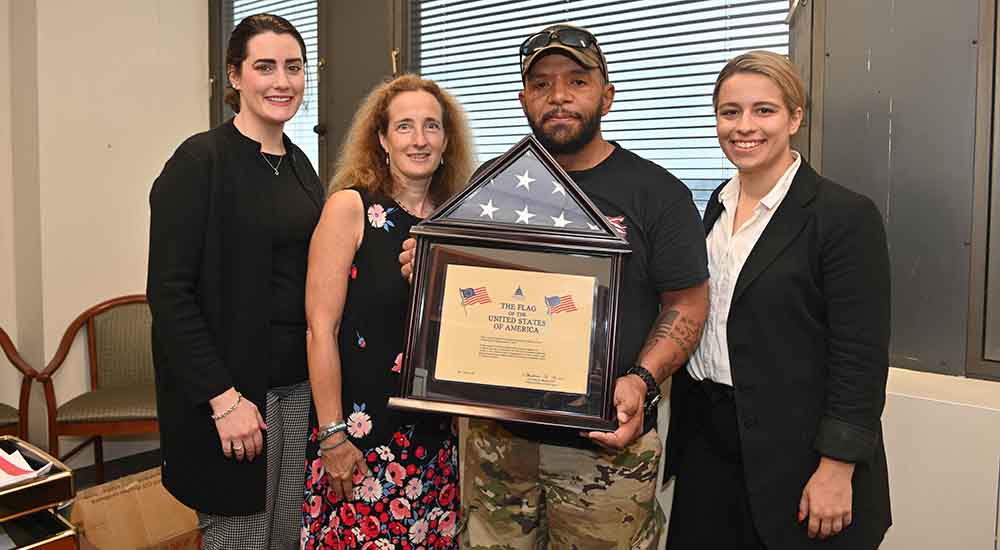 “You often hear negative news about the VA, specifically related to suicide. We don’t recognize the hard work and achievements of our providers, which is why I wanted to honor Dr. Goodman. Sometimes we need to recognize good work in the news.”

Those are the words of Iraq combat Veteran Wilfredo Santos, a patient at the James J. Peters VA Medical Center in the Bronx, New York. He took it upon himself to arrange for formal honors for a VA clinician he credits with saving his life.

The life-saving work took place not in an emergency room or surgery suite, but in classrooms at the Bronx VA where groups of Veterans—including Santos—meet on a regular basis. They talk about their problems, their challenges and their experiences in wanting to take their own lives. The idea of the program is to bring together Vets who have a recent history of suicidal thinking or behavior and provide them with group psychotherapy. They use peer support and revise their safety plans as they add the skills they are learning.

The format, known as Project Life Force, was spearheaded by Dr. Marianne Goodman. She’s the associate director of the New York Mental Illness Research, Education and Clinical Center (MIRECC), based at the Bronx VA. She is also a professor of psychiatry at the Icahn School of Medicine at Mount Sinai.

Project being expanded to other VA sites

The model she pioneered has been expanded to a few other VA sites so far—Kansas City, Albany and Syracuse. It is being tested in a VA-funded randomized clinical trial at the Bronx and Philadelphia VA medical centers. The study will include 265 Veterans.

With the help of Santos’ congressman, Rep. Jose Serrano, a flag flew over the U.S. Capitol in Goodman’s honor on June 1. Goodman received the flag in a ceremony at the Bronx VA in August.

Santos, an Army mechanic who deployed to Iraq during 2008 and 2009, says Project Life Force has been a life-saver for him and his peers.

“We communicate with other Veterans in the room to offer support and generate ideas on how to distract yourself so you don’t hurt yourself. We truly use our suicide safety plans and make them part of our everyday lives.”

Group sessions for Veterans with issues like PTSD or anger are common in VA, but Goodman has been breaking new ground by running groups for suicidal Veterans. Some experts fear that having suicidal patients mix and share their thoughts and feelings could actually increase risk. Goodman and her team have found otherwise. She says the very power of the intervention appears to be the group.

“Veterans no longer feel alone,” she says. “They feel someone understands their impulses and urges.”

As for the flag honor that Santos initiated, Goodman takes it as a sign of the impact of Project Life Force: “The flag and the dedication on Capitol Hill are an incredible honor. It’s a great feeling to know that our work is helping Veterans find meaning and purpose in their lives.”