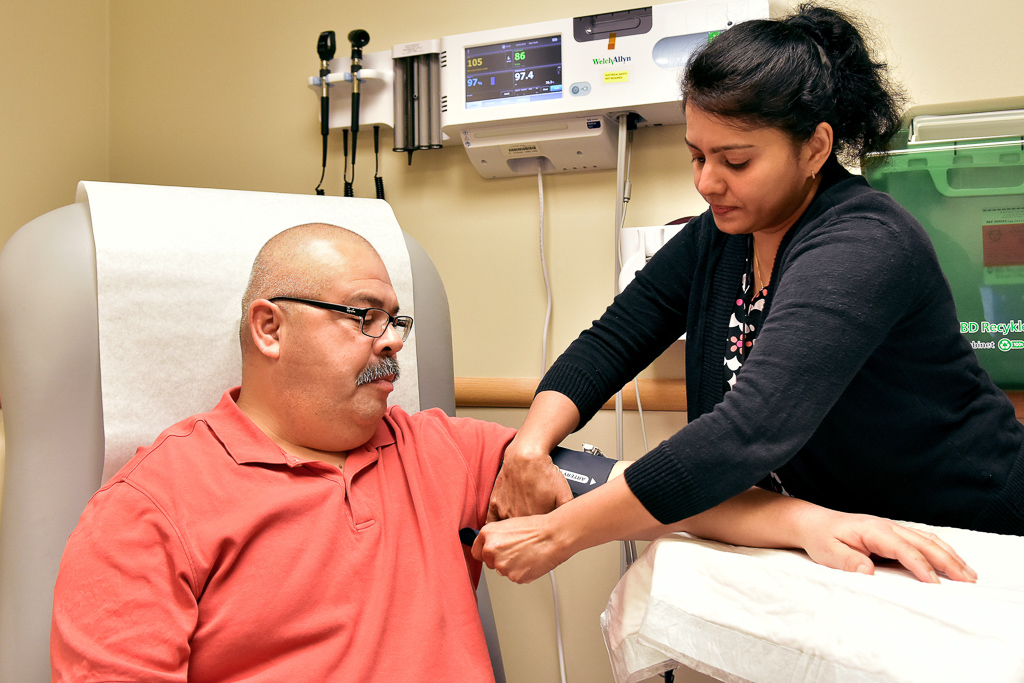 Cardiovascular disease, strokes, and heart attacks are the leading causes of death in America. More than a third, or 37-percent, of Veterans have been diagnosed with hypertension and more than 40-percent have high cholesterol. For VA North Texas Health Care System, this means accounts for more than 55,000 Veterans.

Identifying and controlling hypertension and high cholesterol in a patient population that is 50-percent more likely to be at risk is no small undertaking. It’s a big challenge. VA North Texas Health Care System is tackling these silent killers and serving as a national example.

The American Heart Association (AHA) and the American Medical Association (AMA) recognized VA North Texas as the ‘Gold Standard’ for controlling both hypertension and high cholesterol among its patient population. AMA and AHA developed the recognition programs, Target PB and 4C, as nationwide initiatives that recognize commitment and excellence in patient preventative control efforts.

VA North Texas’ efforts in Target BP and 4C has helped more than 51,000 Veterans to take control of their health and reduce the risk of stroke or heart attacks.

“Our staff works incredibly hard at listening to the needs of our patients and asking the questions that can ultimately save lives,” said Dr. Stephen Holt, VA North Texas Health Care System Director, himself a Disabled Veteran and patient. “As Veterans we need to be pro-active in our health care and mitigate potential issues before they become serious.”

According to the American Heart Association, adults should strive for a 120/80 or lower blood pressure reading to significantly reduced the risk of heart attacks and strokes. More than 37-percent of all Veterans have been diagnosed with hypertension.

Hypertension and high cholesterol are the two most significant–and two most controllable–contributors to heart attacks, strokes and cardiovascular disease. AMA and AHA developed the two programs as a collaboration among health care providers. And it urges primary health care providers to develop a partnership with their patients in making life style changes, coupled with medication, to combat these silent killers. The AMA and AHA then recognize those health care teams who achieve the target reductions to safe levels in the majority of their patients.

“I’m a high risk for a heart attack and stroke,” says Olegario ‘Ollie’ Cano III, a Marine Corps Veteran. “But, controlling my blood pressure is an easy fix to help fight that risk. My VA doctor has helped me to understand this and get on track.”

Referred to as silent killers, high blood pressure and high cholesterol, have no outward signs or symptoms. A healthy blood pressure is 120/80. Hypertension begins at 130/89, and fewer than 50% of those with hypertension, know they have it. Similarly, high cholesterol is anything over 200 milligrams. The AMA and AHA programs educate patients about the ‘numbers’ and what they mean.

Both hypertension and high cholesterol are treatable when identified in the patient.

For many Veterans, awareness and education are the key to mitigating further issues and complications.

“My blood pressure has been under control for three years, and my cholesterol is now within acceptable limits” says Ollie. “It’s been pretty easy, simple changes and medication and I’m doing pretty good.”

More than 70 medical facilities in Texas participated in this program. VA North Texas exceeded all other facilities with more than 134,000 active patients across 40 counties. It’s the second largest health care system in the VA.