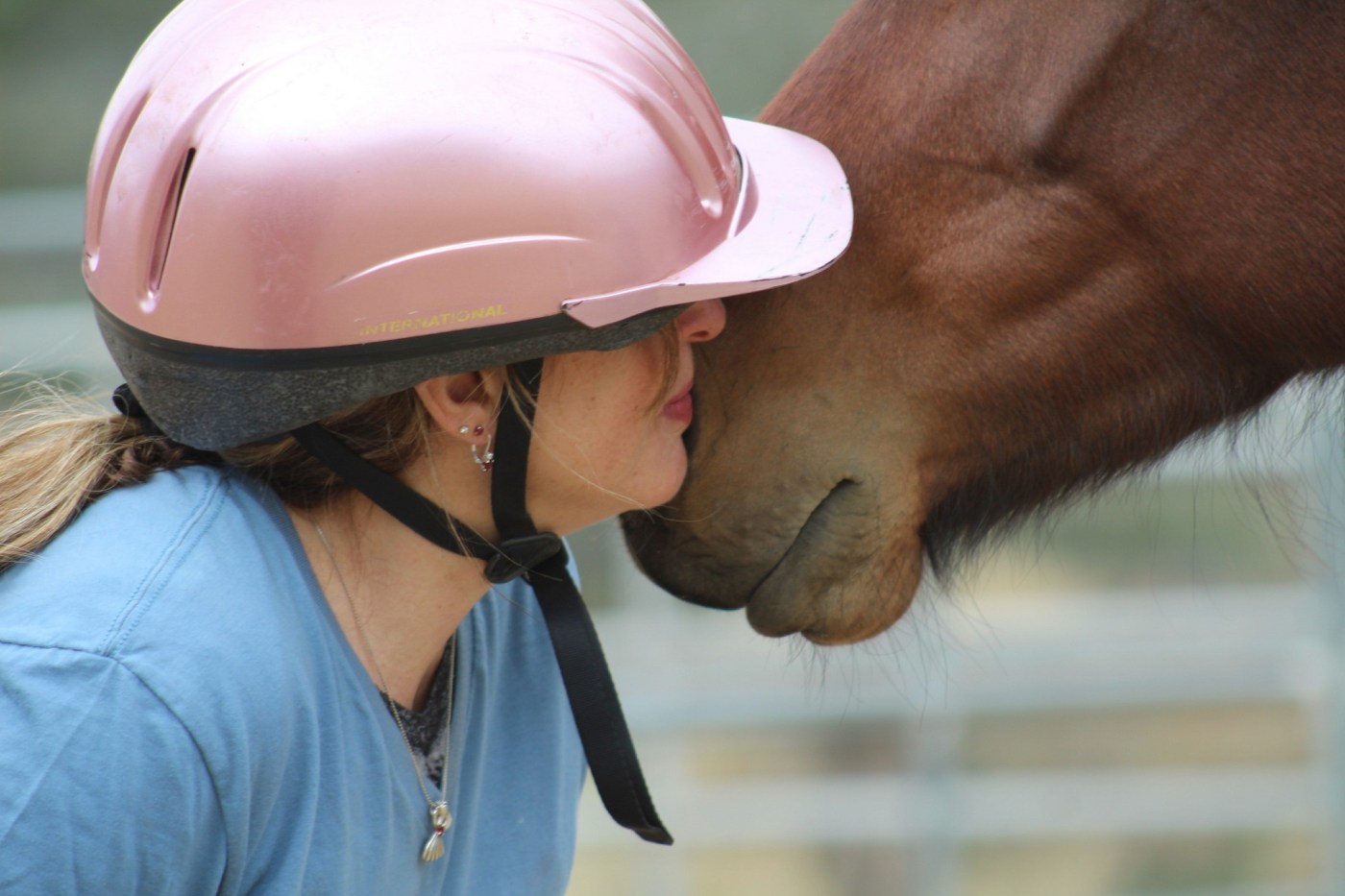 Barbara Wickham poses with Dutch Capt. Ruud Dirkzwager during her assignment to the Netherlands.

In the end, a wild beast tamed the anxiety and years of hurt in Barbara Wickham’s heart.

The Army Veteran suffered mostly in silence after a sexual assault, never telling family or friends about the ordeal she suffered while stationed in the Netherlands.

Wickham, who gets care at the Denver VA Medical Center, is attending this year’s National Veterans Creative Arts Festival, Oct. 28 to Nov. 3 in Kalamazoo, Michigan. She won first place in the multimedia drama category for her photo-video montage tribute to Red Velvet, a wild mustang she worked with last year at Lifesaver’s Wild Horse Rescue.

“If this helps others to go forward, because I was scared as hell when I got out to approach VA, then I want to help those people,” she said.

Wickham spent 27 years in the Army Reserve and National Guard, with several deployments throughout her career. She married another Army Veteran shortly after she returned from Desert Storm.

“There was always camaraderie with my unit back home. My experience with harassment and all of that, is it happened when I was on some operational duty, away from my headquarters. I put up with the crap because I love my work.”

Wickham wanted to deploy to Saudi Arabia with her unit for Desert Shield and Desert Storm, but was instead sent to Rotterdam in the Netherlands. The port city was used to send equipment from Europe to the Middle East. She worked in the international press center with Dutch, German and American public affairs and protocol officers.

“Life caught up with me,” she said. “My anxiety got out of hand. The triggers, someone coming up behind me, a lot of things … “

— Barbara Wickham, describing how years of trying to ignore her post-traumatic stress caught up with her after military retirement

Her commander, she said, didn’t like women. Instead of living with the other officers in a nearby hotel, she had a private room connected to the barracks where American and Dutch soldiers lived and slept side by side.

Coming back from town one evening, Wickham said an American soldier, drunk and on drugs, forced his way into her room and locked the door behind him.

At first Red Velvet kept his distance from Barbara, until she learned to put her anxiety and fear aside.

“It was horrible. His eyes were glazed over and he had overwhelming strength, a weapon. It was a scary experience and I was pretty roughed up. Two Dutch soldiers tried to help me. Two of my own soldiers were able to break a window and they roughed the guy up big time. They ended up getting in trouble.”

“There were a lot of good times and great men and women I served with in my career, friends I have until this day.”

But after military retirement, “life caught up with me,” she said. “My anxiety got out of hand. The triggers, someone coming up behind me, a lot of things.

“I didn’t put it together until I was at the VA hospital in Denver for my husband’s appointment, and I was shaking, having a panic attack. I froze, I had to leave. The nurse recognized it.”

Getting help from VA and horse therapy

VA connected Wickham with a military sexual trauma coordinator. Eventually, with encouragement from family and friends, she filed for VA disability, but didn’t want anyone to know what happened.

Wickham tried medication, yoga, tai chi and other VA offerings, but it wasn’t until her trip last year to Caliente, Calif., and the wild horse rescue, that it all came together.

“It’s a little mystical, it’s a little magical,” said Jill Starr, founder and executive director of Lifesaver’s, which brings Veterans and others to her ranch for four days to live and help gentle wild mustangs before they can be further tamed and put up for adoption.

“Horses are nonjudgmental, but they’re not easy targets. Horses don’t really need people. They are independent and give as much as you give to them, and somehow that opens the door to your heart.”

“Veterans have already given so much of themselves for us, for America, we need to give back,” Starr said. “We need to help them and our horses are really good at that. Horses are nonjudgmental, but they’re not easy targets. Horses don’t really need people. They are independent and give as much as you give to them, and somehow that opens the door to your heart.”

Red Velvet kept his distance at first, so a trainer told Barbara Wickham to relax and roll around in the dirt. That helped break the ice.

Wickham said it introduced her to a new world.

“It was a form of therapy like nothing I ever experienced,” she said.

She was put into a circle with Red Velvet, but Wickham’s anxiety got the best of her.

“I had chest pains and all the symptoms. I was scared and the horse walked away from me, and I didn’t know it was because I was frightened. The trainer told me to relax and roll around on the dirt. I relaxed and the horse came right up and put her head right on my shoulder.

“Something came over me and I was so relaxed. I literally fell in love with this horse. She allowed me to groom her, comb out her knots. She gave me my courage back.”

Starr said it’s typical for people to break down crying after the horse breaks down those emotional guards.

“And it’s not sad, because these are happy tears and it works with any kind of trauma. It’s painful but they are letting go of the pain. The horse doesn’t care what you’ve been through, doesn’t care what you were. The horse only cares about what you are, and if you want to make that connection, you have to throw away the old stuff and stop compartmentalizing.”

Wickham took another one of her loves — photography — and turned it into her tribute to Red Velvet, with photos she and others took during that week.

Her video begins with the sound of galloping horses, as she opens up about her past.

“I am a Desert Storm Veteran with 27 years of service, disabled, PTSD due to MST. Overwhelming anxiety has prevented me from talking in detail about my trauma. But my time with Red Velvet has been more helpful than any other therapy I have received,” she says on the video.

“At first, she was intimidating, a 1,000-pound animal after all… Horses mirror our emotions. I had never been near such a huge animal before… I showed love, she gave me love. She allowed me to revisit my past trauma to let go of my fears, my hyper vigilance. To realize I still had my power, my strength, my courage. My trauma did not define me. Horse therapy changed me forever.

“She helped me get beyond my pain. I am forever thankful to Red Velvet for her gift and the special love we shared.”

Editor’s note: Starr said Red Velvet is now working more closely with a trainer so she can be further tamed and will soon be adopted out to a family.