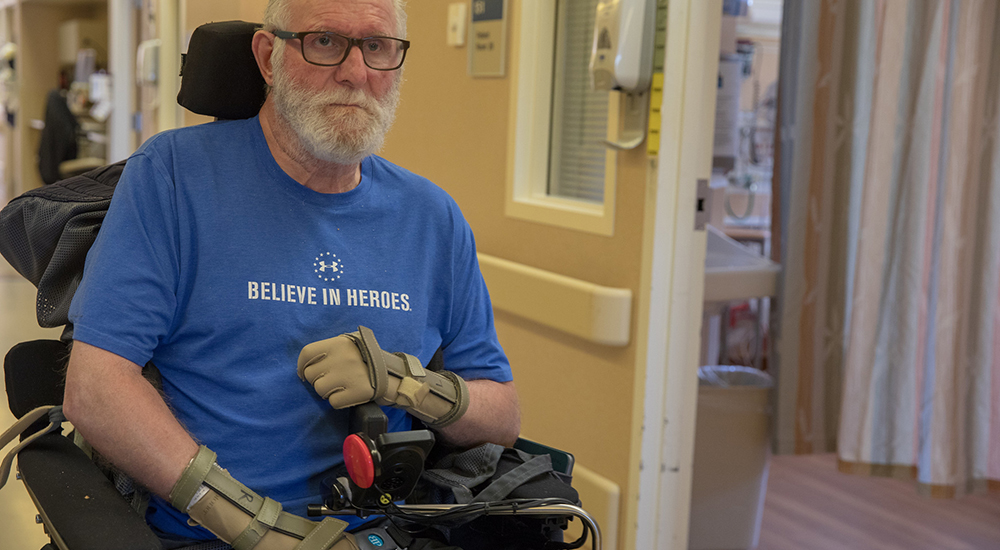 Veteran Jim Borelli was frustrated because he couldn’t use a standard round joystick to operate his power wheelchair. Then a Milwaukee VA Medical Center physical therapist came through with a square 3D-printed replacement and Borelli was back in control.

Borelli, who has a spinal cord injury that resulted in quadriplegia, couldn’t keep his hand on the round surface of the joystick.

“I would drive the chair maybe five or ten feet before slipping off the [joystick],” said Borelli. “It was very frustrating and made life more difficult than it already was.”

Borelli’s physical and occupational therapists tried to fix the problem without success.

After watching Borelli’s arm and shoulder movements, Schultz realized the issue was the shape of the joystick. Schultz used a 3D printer to make a rectangular replacement at a cost of about three dollars in materials.

Back in the driver’s seat

Almost immediately, Borelli was back in the driver’s seat.

“It was the first time since he was injured that he was able to drive his power wheelchair,” Schultz said. “That opens up a world. The fact that you can leave your hospital room and actually go out and talk to people in the hallway. That’s huge.”

The $3 replacement part that made all the difference.

“We’ve gone from six to eight weeks down to three or four days,” she said. “Not only are you saving time, now the Veteran has that in their possession much sooner. That is the part that continues to amaze me, day in and day out.”

Schultz said using the 3D printer to help Borelli and other Veterans is its own reward.

“Working within the confines we have, we were able to give him more independence,” said Schultz. “That is the reward, changing lives.”

How 3D printing helps before a Veteran’s surgery