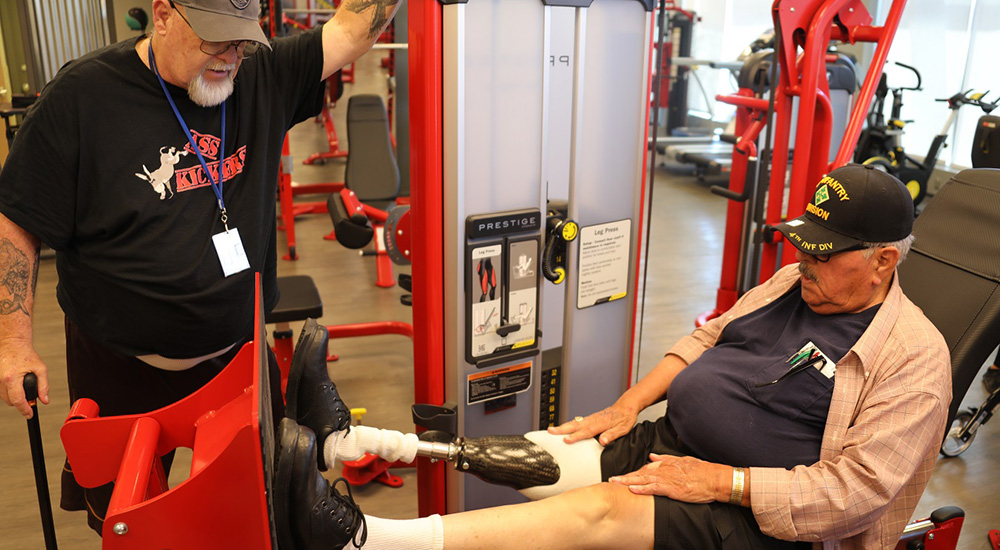 In the gym at VA Southern Nevada Healthcare System, Joe Curran encourages R.J. Garcia with the intensity of a football coach. “C’mon, you’ve got this!” Curran barks as Garcia struggles to finish his last rep on the leg press machine. Garcia pushes through gritted teeth as he lowers the weight, balancing it between his good leg and his prosthetic. “There you go!” says Curran.

The two Army Veterans are members of the Ass Kickers, an amputee exercise and support group that meets every Friday.

Veteran R.J. Garcia and kinesiotherapist Jessica Blackwell at the gym.

“They took on the name because they are known for making a lot of noise,” says Jessica Blackwell, a VA kinesiotherapist who founded the group in 2017 as a way for amputee Veterans to stay active and meet others in the same situation. “They’re a great group of guys, but we mean business. They’ve come to work hard, and that’s how they got the name.”

Kinesiotherapy is therapeutic exercise to help rehabilitate people with functional limitations, including amputations.

“Joe is our ringleader,” Blackwell says. “He’s our loudest one, but he takes care of the other guys, making sure that they have the resources they need. He’s actually helping himself in the process.”

Pushing Veterans “out of respect”

Curran relishes his role. “What I do is put a little fire under their butts. These guys in wheelchairs, they won’t get out unless I start pushing them. And I only do it to motivate them, out of respect.”

The motivation works, says Blackwell. “I’ve really seen a great turnaround with my guys since we started this group. Their health, their psyche, their mood—I’ve seen a lot of improvements.”

One reason Curran is so successful is that he literally walks the walk. After he lost both legs to complications he attributes to Agent Orange exposure, VA specialists helped him get going again. “First they taught me how to walk on one foot with a walker, how to hobble along. Now I can just walk with a cane. I try to stay out of the chair as much as possible.”

Joe Curran lights a fire under his fellow Veterans.

Curran’s grit is contagious. The group has expanded from two Veterans at the start to more than 25. Besides their Friday gym session, they often meet for bowling, golf and other events.

A sense of community

“Before this was created, our guys didn’t really have a reason to put their leg on and go outside,” says Blackwell. “They told me that they would stay at home and sit in their wheelchairs. This has really given them motivation and a sense of community.”

“I’ve got a theory,” Curran adds. “The average American Veteran in a wheelchair is 200 pounds overweight. They’re homebound and often depressed. They’ll live longer if I can get them out of that chair. So that’s my plan: get the Veteran off his butt and move!”