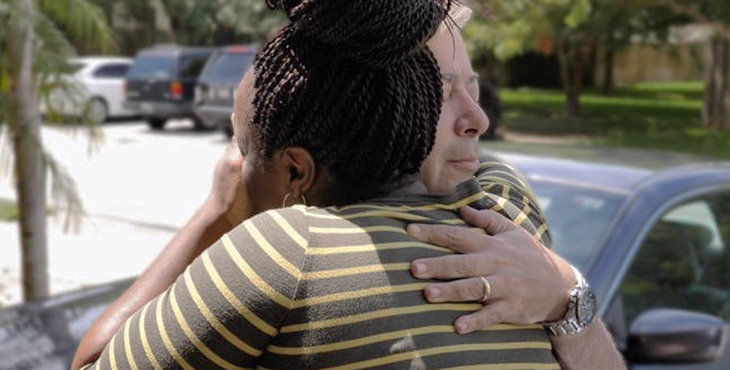 Navy Veteran and Miami native Ashley Esposito returned home from military service with hopes of becoming a chef. She comes from a family of chefs and was the cook for her squadron, preparing meals for 200 people by herself.

But upon returning home, Esposito experienced emotional and physical challenges. Her back began to ache, and she discovered, as a 26-year-old, that she had arthritis. Seizures led to an extended hospital stay, which kept her away from her job at the Copacabana. Soon, she found herself homeless for the first time.

“When you’re in the military and say you have housing problems, you can take out a loan and they’ll put you in base housing. There are so many options that you have as military personnel,” Esposito said. “When you get out into the civilian world, it’s not like that.”

After three years in and out of homelessness, Esposito did the only thing she could think of to do: “I went to the VA and was like, ‘I need help.’” Through VA, she met Seth Eisenberg, president and founder of Operation Sacred Trust.

Operation Sacred Trust (OST) is a nonprofit organization funded by VA’s Supportive Services for Veteran Families program. Eisenberg described how VA realized that every Veteran needed individual attention, which helped spark a discussion to fund public-private partnerships like the one with OST. OST’s approach includes posing Veterans this question: “What do you want for the future of your life?” In Esposito’s case, the answer was getting a college degree and helping other Veterans experiencing challenges similar to her own.

Esposito endearingly refers to Eisenberg as her “guardian angel,” but Eisenberg is equally grateful for Esposito. When asked what he thinks when he encounters people like her, Eisenberg responded, “I think ‘Thank you, God, for bringing Ashley in.’ I think of the 20-plus Veterans every single day who never make it in.”

Esposito is currently employed by VA and working toward a business degree through Florida International University.