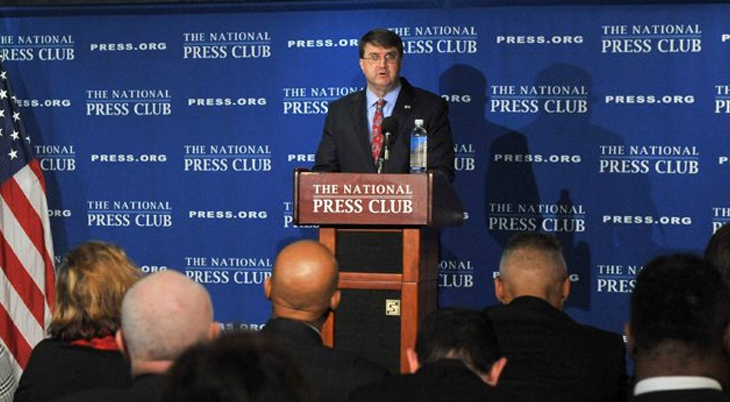 Veterans will continue to see improvements in VA services, VA Secretary Robert Wilkie said at “State of the VA” speech Feb. 5 at the National Press Club in Washington, D.C.

These improvements for Veterans include increased innovation—including the VA’s first 5G hospital—along with decreased wait times for appointments and better overall care.

The VA hospital in Palo Alto, California, is about to become one of the first 5G enabled health facilities in the world, with portions becoming operational this week. The secretary said will deliver is richer, more detailed three-dimensional images of patients’ anatomy. He added the resolution is so clear and consistent that it will give VA a reliable means of delivering telesurgery services to Veterans.

“That means we will have the capacity to allow VA’s best physicians to consult during surgery even if they’re not in the same room and are halfway across the country,” he said.

Wilkie also pointed to VA’s work on exoskeletons, which do the work patients can’t do on their own. The VA currently has a pilot program to develop exoskeletons that stimulate the spinal cord.

The secretary also pointed to a VA partnership to help Veterans with post-traumatic stress disorder and pain management.

The partnership is with the University of Southern California, a non-profit called Soldier Strong, and AppliedVR. Veterans with PTSD use virtual reality relive and reimagine traumatic events in a controlled setting, under the care of a clinician. The program gives Veterans a chance to process these emotions, which can be an effective treatment for PTSD. He said virtual reality can also help block pain signals from reaching the brain, and thus is a drug-free supplement to traditional pain therapies.

Veterans also see improved care through innovations such as telehealth, a new technology to identify potential diabetic foot ulcers and the precision oncology program. All these innovations help increase Veteran care, he said.

The secretary said this innovation carries on VA’s previous innovation, which includes inventing the cardiac pacemaker, inventing the nicotine patch, performing the first liver transplant and introducing a powered ankle-foot prosthesis. He said all these innovations have a direct impact on Veterans’ well being.

Veteran wait time is shorter at VA than compared to private sector. This decreased wait time is for primary care and two of three specialty areas. Wilkie said that’s coupled with a record-high 59.9 million Veteran visits in fiscal year 2019. That’s 1.7 million more appointments for Veterans than ever before. He added 90 percent of Veterans surveyed trust the care they get at VA.

When Wilkie took over, only 25% women vets were enrolled in VA care. Now, he said 41% receive VA care.

Overall Veteran care is improving, Wilkie said. He said VA will implement a provision of the MISSION Act in 2020. This will extend Caregiver benefits to Veterans who served before 1975.

Veterans also receive better mental health care, Wilkie said. This includes same-day mental health care and a universal screening process to identify Veterans who may be at risk. Since late 2018, VA screened more than 4 million Veterans. He said the Veterans Crisis Line is taking more than 1,700 calls each day, and VA takes emergency action on about 100 of those calls.

“I believe that Veterans can show the country the way on how to deal with this terrible problem,” Wilkie said. “

Wilkie said the President’s Roadmap to Empower Veterans and End the National Tragedy of Suicide, or PREVENTS, task force is weeks away from releasing recommendations. The task force will include a community integration and collaboration proposal, a national research strategy and an implementation strategy. Wilkie said he will recommend that VA opens up financial support. This includes charities, local governments and non-governmental organizations to help Veterans.

Wilkie also addressed Veterans stationed at Karshi-Khanabad base in Uzbekistan, better known as K2.  U.S. forces occupied the old Soviet base shortly after 9/11. Wilkie had candid advice for any Veteran who served there.

“I want all Veterans who have been there and who feel they need to see us to come forward,” he said. He added all Veterans should seek out VA to use the benefits they’ve earned.

“Come see us. File the claims. Come speak to us. This is not your grandfather’s VA where the paperwork is going to take 10 years.”