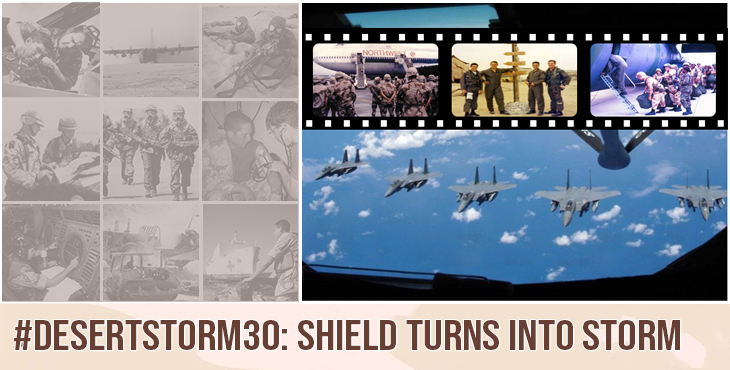 Air Force Veteran Howard “Pip” Pope, commander for the 71st Tactical Fighter Squadron, was among the first American forces to arrive. Leading a squadron known as the “Ironmen” flying F-15s, they deployed with little notice in a matter of days. After a 14-hour flight from Langley Air Force Base in Virginia, they arrived at Dhahran Air Base in Saudi Arabia.

Pope kept a diary of the events, excerpts of which follow. The diary paints a picture of how quickly U.S. forces deployed to the region, changing from an eight-plane deployment to an entire squadron of F-15s. The entries have been lightly formatted for clarity.

Recalled by the wing for a battle staff meeting. Subject: Lightning Recall regarding the invasion of Kuwait. A situation update was presented by wing intel. The wing commander directed the 71st to put all Lightning players on crew rest immediately and alluded to the fact that there was more than just a little confusion on exactly what plan we were going to deploy under. Gathered all 71st personnel in the main briefing room and relayed the wing commander directive as well as the current situation as it was known. By 1130 hours all the pilots had been selected and departed for quarters, and the remaining squadron personnel began preparation for a Lightning deployment to the Middle East, location TBD.

0900 HRS. Wing intel presents the situation update. The wing commander gives his assessment of what’s going on and where we stand. At the conclusion the Lightning boys head back into crew rest and quarters by 1200 hours. Inform the wing director of operations that there has been no preparation for this deployment and we need to get into the squadron and do some preparation and study. He plans on bringing everyone in on Monday AM unless told otherwise.

The Lightning pilots begin detailed study of Southwest Asia, the threats and the entire spectrum of what might be expected in this deployment. The squadron is still under the impression that if we deploy it will be a Lightning Package, i.e., eight planes and pilots.

2030 hours. The wing director of operations calls LTC Pope at home and informs him that the wing is being recalled and that the entire 71st pilot continent is to stay at home in crew rest. LTC Pope informs the squadron to stay in crew rest and that only essential personnel are to report for work the next day.

At 0500 the wing deputy director of operations calls and tells me that there has been a change to the deployment plan and that he might need to reorganize the pilot deployment roster. YGBSM! Thanks. At 1030 hours call LTC Smith, 94th commander, who is working in the command post, to find out what is going on. LTC Smith informs me that the entire squadron is being deployed and the deployment briefing is scheduled for 1330hrs. LTC Smith thought the information had been passed along. Well, not exactly!

At 1300hrs everyone shows for roll call except one pilot who was late getting the word. He arrives late but gets the essential information. The briefing begins at 1330hrs, it lasts 20 minutes. It took 3 days to prepare and this is the first time we get to hear any of it. The briefing is fairly complicated, but there are not a lot of questions to be asked because there is no time to ask them. We step to our jets and strap in and are promptly put on a 30-minute hold as a result of the tankers having problems. Finally, we take off (1730hrs) for the midnight ride to sand land. We deploy in four cells of six aircraft, 30 minutes apart, loaded for bear, 4x4xGuns. It’s going to be a long ride, but we’re finally enroute!

A Shield becomes a Storm

Got the word today, “EXECUTE DESERT STORM AT 0130 IN THE MORNING.” Talked to all the troops and told them they could expect some kind of retaliation by tomorrow morning. We’re ready. Tensions are high, but we’re glad to get this underway. Looks like it will be an Air Force/Navy air play for the first week or so.

First bombs fell at approximately 0300. Lots of triple A, but not many surface-to-air missiles. Must have caught them flat footed? Capt. Steve Tate shot down an F-1 on his first mission. Great job. Nobody else got much of a chance, everybody that got airborne on their side (not many) basically ran away when they were targeted. We’re working 24hrs a day and it will take its toll on jets and people before too long. No retaliation so far, I think we’re really hammering them. Almost got a couple of MIGs this afternoon but the Eglin boys were out in front and they bagged two.

We’re still flying strong and the jets are holding up fairly well. We’ve taken no casualties so far and I hope it stays that way. They shot a Scud at us this morning, but the Patriot missiles took it out. Those who saw it said it was pretty impressive. The Patriots are on automatic and nobody even knew the Scud was inbound, but the Patriot launched on its own and knock(ed) it down. They launched seven missiles at Israel this morning and although they weren’t shot down, they didn’t do much damage. We’ve taken out the fixed Scud launchers we could find and we’ve destroyed more mobile launchers this afternoon.

The guys are starting to get tired and the wing commander is going to send for a few more pilots from the 94th Squadron. We’re flying twenty-four hours a day and getting sleep whenever we can. There is nobody that does not have something to do almost 18-20 hours a day, it’s a tight schedule and anybody that goes DNIF (Duties Not Including Flying) really throws a wrench in the plans. The flight docs have been very helpful in that regard and they are doing a great job with the guys. We’re flying a lot of sorties and hours, caps, sweeps, escorts, and search and rescue. I don’t think there is a mission we haven’t flown yet. The guys are doing a marvelous job.

Weeks pass, then the end

Over the next several weeks, Pope and other members witnessed burning oil fields, retreating Iraqi aircraft and the start of the ground war. By March 3, the squadron received word they were headed home. They took off March 7, with a stopover in Spain and then on to Langley the next day. Pope’s final daily entry covered their return.

We launched at 0830 and flew 9.5 hours into Langley. The president wasn’t able to make it down, but the welcome was nothing short of unbelievable. The wing commander led us in and parked up front in designated spots in front of a large stage. A lot of tears, hugs and speeches. Later we all retired to our homes to watch the TV’s showing us arriving and talking to all the media. The welcome was really incredible, and it really put frosting on the support we had been getting throughout the war.

Even though there were a few hiccups along the way and we almost missed our departure briefing there was never a doubt that the Ironmen were ready and able to step up to the tasks delivered to our doorstep with regard to Desert Storm. One day we were preparing for a deployment to Denmark and a great experience working and exercising with our allies in Europe, the next day we were in crew rest wondering what Saddam was going to do next.

There was not much time to prepare for what was going to happen next and to say that the ”Fog of War” was in our midst… was probably an understatement when it came to the 71st and what was happening within the wing. Through the efforts of a lot of great people and dedication the 1st Fighter Wing and its squadrons were able and prepared to deploy successfully to Saudi Arabia on the 7th of August 1990.