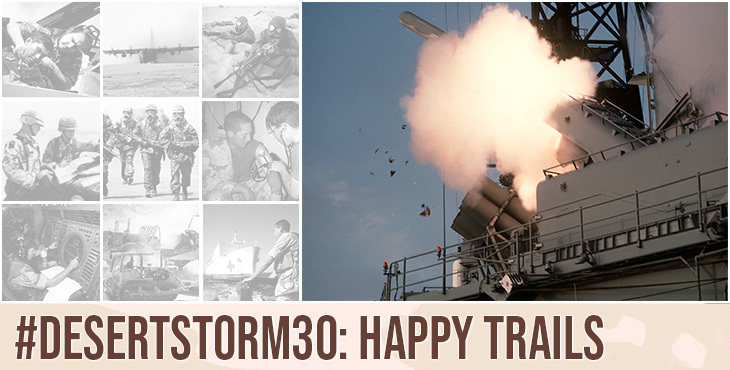 On the evening of Jan. 16, 1991, Jacky Frawner was in a weight room when he heard his skipper come across the shipboard public address circuits, also known as the 1MC. The alert let the sailors aboard USS Paul F. Foster know that they were about to transition from Operation Desert Shield to Operation Desert Storm.

USS Wisconsin was supposed to fire the first Tomahawk missile. However, the mission shifted to the USS Paul F. Foster.

Within hours, Frawner and his shipmates would be part of the opening shots of Desert Storm.

Path to the Middle East

Frawner with his mother aboard Paul F. Foster.

Born in California, Frawner moved to Indiana. After losing his father at 11, his mother raised him on a limited income as a widow. Frawner, influenced by living close to Mare Island Navy Shipyard in Vallejo, California, decided to enlist, joining the Navy in 1988.

The crew departed Dec. 8, 1990, from Long Beach, California. After stops in Pearl Harbor in Hawaii and Subic Bay in the Philippines, the ship headed to the Indian Ocean. The ship raced to the Middle East while Frawner celebrated his 21st birthday Jan. 12, the day the ship navigated the Straits of Hormuz Eastern Patrol Area into the Persian Gulf.

Along the way, Frawner was one of the crew helping get USS Paul F. Foster to its destination. As an engineman, Frawner maintained equipment, took readings and did regular service. The largest piece of equipment his division had on the ship were the two vapor compression distillers. Frawner’s division also made the fresh water to drink on board.

Like any sailor aboard a ship, Frawner had other responsibilities as well. These included serving as a flight deck crewmember, refueling helicopters, emergency response member, fire party team member and securing damage for the Vertical Launching System, which held the ship’s Tomahawk Land Air Missiles.

Leading up to Desert Storm

In the days leading up to Desert Storm, Frawner said the ship continually performed drills – something his younger self didn’t appreciate.

“As a young sailor, 20 years old, I was annoyed with the frequency we were doing drills,” he said. “The old salt in me today realizes doing the drills, countless times on different locations of the ship, only prepared us to the highest level to respond in a muscle memory sort of way.”

One of the realizations they were in harm’s way came shortly before the war.

“We were sailing through the Straits of Hormuz Eastern Patrol Area (SOHEPA) on my birthday,” he said. “We went to General Quarters due to small boats being suspicious in the area. It was this same type of small boat threat that leveled a blow against the USS Cole in October 2000 in Yemen while refueling. This was my first realization that this is not a drill.”

A few days later, the drill was real.

In the ship’s weight room, Frawner and a half dozen other shipmates heard a message from the commanding officer: the ship would send a message to Saddam Hussein. Over the next few hours, the crew started executing all those drills they practiced repeatedly.

Frawner’s battle station was in repair locker 2, the forward most of the three repair lockers onboard for damage control, firefighting, flooding and other repairs. By 1:30 a.m. all topside personnel exited inside the skin of ship safely and quickly.

At 1:41 a.m., sailors aboard USS Paul F. Foster launched the first of nine Tomahawk missiles that night. Over the strike radio, the words “happy trails” came over to signify the missiles were on their way. Those nine from USS Foster were part of the 47 launched in the opening hours of the war.

“In my position as the missiles were being fired, I was at repair two inside the skin of the ship on the starboard side,” Frawner said. “As a Tomahawk was fired it sounded like a distinctive ‘swish’ sound. I did have a very chilling feeling of we are firing, when will they return fire. I waited and waited with my helmet on, gas mask on my person with flash, hood and gloves. We did not receive any fire back at us that morning.”

Over the next few weeks, the USS Paul F. Foster continued supporting the war effort. For Frawner, he was frequently topside on flight deck evolutions, assisting with helicopters. Unfortunately, that also meant seeing the horrors of war, recovering dead bodies.

“This happened about a handful of times,” he said. “The body was usually in bad shape from bloating and burns. The smell is certainly something that doesn’t leave you. As a flight deck crewmember with experience in working under a hot helo, meaning the rotors are going, I assisted in carrying the bodies to the helo.”

For the 44 days spent in combat from Jan. 17 to Feb. 28, the USS Paul F. Foster earned a combat action ribbon.

Separating from service and struggling

Frawner separated from the Navy in August 1992, and then moved to Houston. He carried around the memories of Desert Storm, burying the stress of his service time by turning to alcohol. He finally sought help.

“I was struggling with things and decided to see a counselor to better myself as a father, employee and person,” he said. “I dove into therapy, attended a Lone Survivor Foundation retreat for combat Vets and applied for a service animal.”

Frawner and his service dog, Tex, aboard USS Paul F. Foster in September 2019. Frawner’s then-fiancee Lyndi is in the background.

Happy trails in a different way

After Frawner’s improvement, he proposed to his girlfriend, Lyndi, on a reunion in September 2019 – aboard the bridge of the USS Foster. It was also the place he shared the last picture with his mother, the day he left for Desert Storm.

“It felt so amazing to have all of his shipmates be there to witness and celebrate that special moment with us,” Lyndi said. “He even put me in the captain’s chair afterwards! We ran into the captain that was on the ship right after he left and took our picture with him and they put the event in the ship’s log. It was a perfect trip especially after all of the hardships we had experienced in the past. It took a long road for us to get to that point, but it was very special knowing that his mother and I were there with him in that same spot.”

“A lot of men are in denial that they need help or just scared to get help,” she said. “PTSD causes daily struggles and it doesn’t go away, so I am proud that he has chosen to fight his way out of the dark and be in the light with the rest of us who have never had to endure that kind of pain.”

For the pair, the happy trails are just beginning.