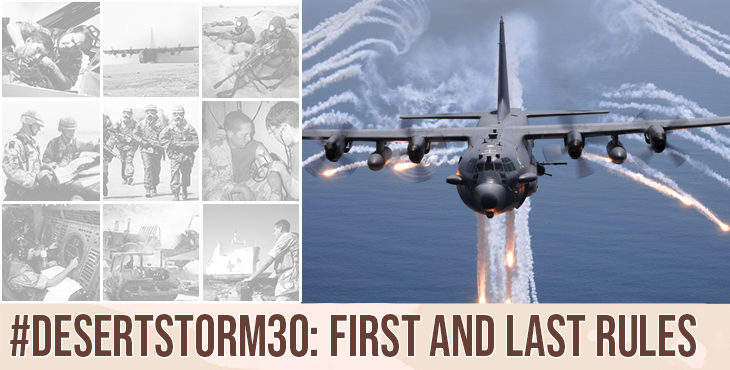 On their second mission during Operation Desert Storm, the crew of an AC-130H gunship, call sign Ghost 02, flew a mission that none of them should have lived to tell. Flying into Iraqi airspace, the 14 men aboard destroyed a command and control center, then evaded three surface-to-air missiles through death-defying maneuvers in the lumbering, four-propeller aircraft.

When the crew first arrived during Operation Desert Shield, Air Force Veteran Phil Lebrun said they were in a “two-week cycle mindset.” Lebrun’s crew and another spelled the initial crews, who only spent a few weeks in theater, then rotated home.

Commanders initially rotated people every few weeks to give crews experience. That soon stopped, leaving many junior members in place.

“Higher authorities said, ‘No, rotations stop. You got what you got,’” Lebrun said.

Crews started flying and mission planning for a rear area security and air base defense mission after studying the threats up north. That’s also when Lebrun went over his rules.

“I sat down with my crew and we went over Captain Lebrun’s rules, objectives and goals,” he said. “The first goal was to get 14 guys home alive. Then we went into a few other things about command structure, respect, tactics, getting gear ready, comm(unications) gear and how we’re going to work in the airplane. Then, I went over my last rule, which was to get 14 guys home alive.”

Lebrun said his goal was to let the crew know their welfare was his priority.

“I wanted to emphasize to them that was my job as their commander – to take care of them,” he said. “I wanted them to be aware of that and respect that everything y’all do supports my goal of getting us home alive while at the same time inflicting as much damage as possible to the enemy and accomplishing our mission.”

AC-130H crew members stand in front of an aircraft during Desert Shield.

On their second mission of Desert Storm Jan. 21, 1991, Lebrun said the crew had good spirits.

“Everyone had tasks to perform,” Lebrun said. “There was no grumbling or any issue. As we did our planning, there was slowly developing some concern over where we were going and the threat level.”

It became clear the gunship wasn’t going to be on the back end providing rear area security. Instead, it would be flying over the border, deep into Iraq.

Following the mission assignment, the crew started checking intelligence reports for the areas. They discovered they would fly near known SA-2 and 57mm anti-aircraft artillery, or AAA, sites. They also read there was a possibility of SA-6, SA-8, SA-3 and additional AAA sites.

For the crew, that meant a strong chance of flying into danger. While their AC-130H does have countermeasures to fend off enemy attacks, it’s large radar profile and flying style – slow and low – created a huge risk for the crew.

“The majority of the threats were mobile and therefore could not be accurately located within the assigned kill zones, greatly hampering our ability to avoid the deadly threats,” Lebrun said. “I knew that our operating altitudes and speed of the gunship would make us an easy target. But we had our orders.”

The crew lifted off Jan. 21 from King Fahd International Airport in Saudi Arabia. Following a refueling, Lebrun checked in with an airborne controlling aircraft. After dodging several radar threats, Lebrun rolled the aircraft into their first engagement, an Iraqi command and control center. Screens showed two large buildings and eight smaller buildings, with vehicles and Iraqi military members across the area.

Moments later, Lebrun pushed a button on his yoke and unleashed the first rounds from the 105mm Howitzer cannon. Immediately after Lebrun unleashed the 105mm, the Iraqi command and control center’s air defense system returned fire.

“The skies erupted into blurred streaks of red and orange fire,” Lebrun said.

In a matter of moments, after firing the 105mm Howitzer cannon, the crew had incoming fire on three sides of the aircraft. Despite the incoming fire, the Ghost 02 crew continued to fire.

After corrections to the fire control computer, the crew then scored a direct hit on one of the large buildings. The other large building took a close hit from the 105mm.

Crew kept calling out the AAA rounds, which exploded closer to the aircraft. As the crew continued to engage, they scored a direct hit on one of the smaller buildings.

As soon as Lebrun rolled into one of the AAA sites, the Iraqis launched an SA-14/16 surface-to-air missile directly at Ghost 02, which was followed by calls over the radio.

At the same moment, AAA rounds were heading toward the nose of the aircraft.

With the missile tracking, Lebrun had to push the AC-130 to its limits. Lebrun ordered a defensive maneuver to the right to leave the target area.

Shortly after, a call came across the radio to head to a new target.

Lebrun turned the AC-130H toward the new target. His crew immediately recognized a danger. Lebrun rolled to his left and noticed a faint light on the ground.

The big item on screen was an early warning radar site. The site also had two separate radar systems. Within moments, Lebrun called over the radio to target the facility. The crew unleashed the 105mm Howitzer, pounding the target for five minutes. While destroying the target, a call came over the radio.

“Ghost 02, we have a missile launch 310 degrees from your position!”

Lebrun said he was aware of an SA-2 missile site located northwest of the gunship’s position. With his hands on the yoke, he turned the gunship to put the missile at their six o’clock position so it would be directly behind the aircraft. As he did that, he directed the crew to scan for the SA-2.

Suddenly, the crew had another problem.

At the front of the gunship, Lebrun was faced with a nearly impossible decision. The gunship had two missiles tracking the aircraft, one at the nose and one at the tail. Racking his brain, Lebrun decided on using untested tactics – and developing new ones on the spot – to defeat both the surface-to-air missiles.

As the gunship passed through 2,000 feet above the ground, Lebrun jinked hard left, then right and again called for the chaff. To this point, nothing Lebrun did made the SA-8 break its lock on the gunship. If Lebrun was going to keep his promise to get his crew home safely, he said he knew he needed to push the gunship harder.

“The hair on the back of my neck suddenly stood up, and I knew the missile would soon impact,” he said. “I decided it was time to suck it up and go for broke with everything possible.”

“MAX POWER! HANG ON CREW! CHAFF!” he yelled out.

As countermeasures shot out the back, Lebrun turned and looked at the engine performance gauges. Every single one was pegged – understandable at an 85-degree bank and 290 knots indicated airspeed.

One gauge Lebrun couldn’t get an exact reading on was the G-meter. AC-130s are typically limited to 2 G’s. Lebrun was pushing the AC-130 to between 3 and 4 G’s. As he continued pulling on the control yoke, vibrating in his hands, the SA-8 exploded near the gunship’s nose.

Lebrun said the brilliant flash and echoing explosion sounded like a cherry bomb going off inside a tin can. He attempted to level the aircraft using the full right aileron, but nothing happened. He then tried right full rudder. Still nothing. Finally, after the aircraft flew through the explosion, the gunship responded. Lebrun rolled the aircraft until the wings were level.

We’re okay – until we’re not

The crew started checking in. Unfortunately, their relief was short lived by a call on the radio.

“I could not believe it: another one,” Lebrun said.

Lebrun forced the aircraft down once again. As the gunship nosedived to 1,000 feet, several crew members started shouting “ALTITUDE!” and “PULL UP!”

As Lebrun yanked on the yoke, the aircraft started leveling off at 500 feet above the ground. His previous 3-4 G’s were now history. The aircraft G-meter stopped at 5 G’s. Lebrun passed the last mark on the meter.

With the SA-6 still tracking, Lebrun continued his descent, dropping down to 300 feet – an extremely dangerous altitude for the four-engine gunship blind by darkness.

With the aircraft at such a low altitude, the SA-6 stopped tracking the gunship. The crew was in the clear.

“I was sure we were damaged by the SA-8 and the required maneuvering,” Lebrun said. “The airplane could not withstand much more.”

From the back, Lebrun heard one of the crew.

“Shit, yeah,” Lebrun responded. “I made you guys a promise, remember?”

Over the radio, Lebrun heard a response.

Despite his remarks, the crew still had a major problem. They still needed to fly an aircraft with significant damage through enemy airspace.

“The airplane was still flyable and under my breath, I talked real sweet to her,” Lebrun said. “At minimum altitude, we escaped the area dodging several known threat sites on the way.”

After the crew landed at King Fahd, Lebrun sat in his seat, numb.

“After landing and taxiing to our parking spot, I could not move from my seat,” he said.

During postflight inspection, maintenance crews discovered the massive damage to the gunship, pushed to the limits by Lebrun’s flying. The SA-8 that detonated at the nose of the aircraft left blast and shrapnel damage on the forward fuselage.

The inspection also revealed Lebrun popped 250 rivets on the aircraft. Rivets hold together sheets of aluminum. By popping 250 rivets, Lebrun had nearly broken pieces of the wings off the aircraft.

Despite the damage, the crew made it home alive. The crew’s sensor operator, responsible for tracking targets, said the mission still lives with the crew three decades after the death-defying flight.

Lebrun and Shock both said the crew’s actions that night was a total team effort, which led to a Distinguished Flying Cross. Although they agreed, Shock added that Lebrun’s leadership as their aircraft commander – ensuring everyone followed the first and last rules – is why the crew survived.

“He was good, and he saved our lives.”