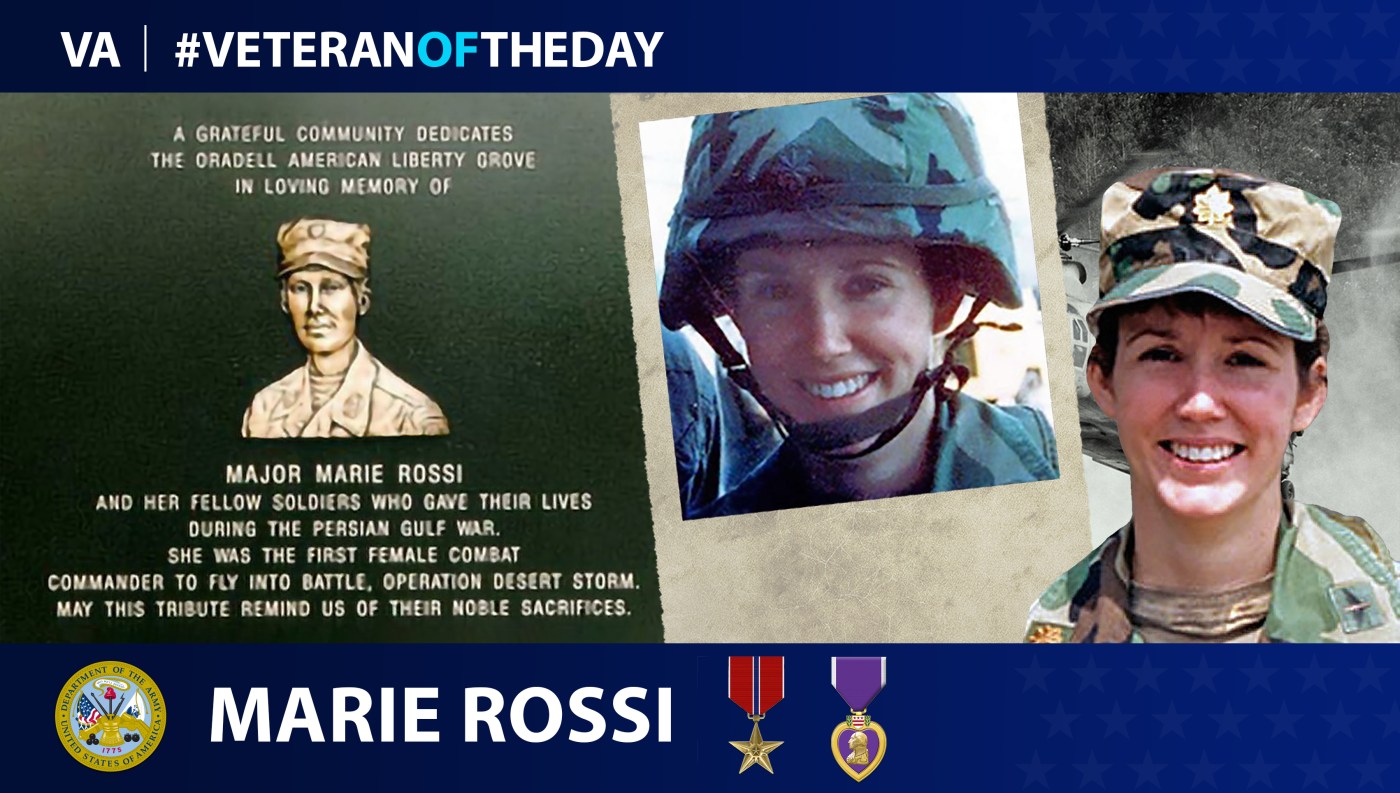 Today’s #VeteranOfTheDay is Army Veteran Marie Rossi, a helicopter pilot who served and died in a crash during Operation Desert Storm.

Marie Rossi was born in January 1959 in Oradell, New Jersey. She graduated from River Dell Regional High School in 1976. She then attended Dickinson College in Carlisle, Pennsylvania, where she majored in psychology and joined the Reserve Officer Training Corps (ROTC). In May 1980, she earned her bachelor’s degree and was commissioned as a second lieutenant.

In an interview with northjersey.com, Rossi’s brother, Paul Rossi, said he was surprised when he found out she wanted to join the Army.

“That never struck me as anything she was interested in. But Marie was very adventurous, and I think she did it because it was an unusual thing for a woman to do at the time–breaking into the boys’ club.”

In the first half of 1981, Rossi attended the Air Defense Officer Basic Course and then the Air Defense Command and Control Course. She became an artillery officer with 3rd Air Defense Training Battalion at Fort Bliss, Texas in June 1981. In 1985, Rossi first learned to fly in the Officer Rotary Wing Aviator program at Fort Rucker, Alabama. She became a pilot in 1986, then attended the Aviation Officer Advanced Class, where she learned how to fly the Chinook helicopter.

Rossi flew Chinooks with the 213th Combat Aviation Company in South Korea from 1986 to 1987. She was then assigned to Hunter Army Airfield, Georgia. In 1990, she became commander of their 18th Aviation Brigade, B Company, 2nd Battalion, 159th Aviation Regiment. In September 1990, she deployed with this unit to Saudi Arabia in support of Desert Storm.

During Desert Storm, Rossi was a resupply pilot and flew numerous missions. She carried cargo, including ammunition, jet fuel and food to the advancing forces of the 101st and 82nd Airborne Divisions. At this time, the military had a ban on women in combat. However, when the ground war started on Feb. 24, 1991, Rossi’s missions took her into enemy territory.

Four days later marked the cease-fire of the short ground war. On March 1, Rossi flew in bad weather at night when her Chinook crashed into an unlit microwave communication tower in Saudi Arabia. Rossi and three other soldiers aboard died in the accident. She was 32 years old.

Rossi rose to the rank of major and earned numerous medals including a Bronze Star, a Purple Heart and an Air Medal. In 1992, she was inducted into the Army Aviation Hall of Fame. Rossi made history, as the epitaph on her tombstone at Arlington National Cemetery forever reads, “First Female Combat Commander to Fly Into Battle.”