Medal of Honor recipient: get your COVID-19 vaccine 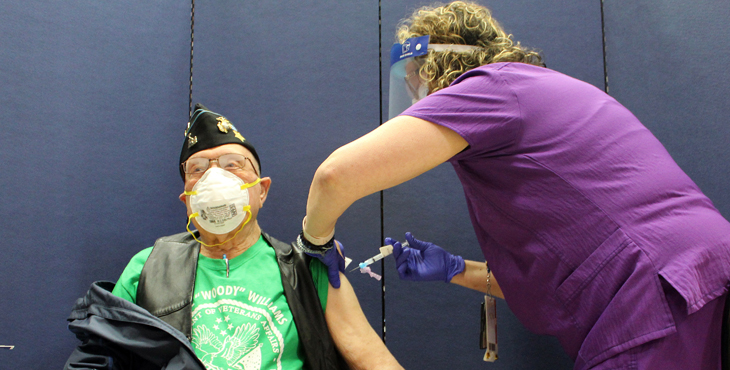 “I would encourage any and all Veterans to take this vaccination,” the 97 year old said. “All of us. All of those who have served in the armed forces — take this vaccine so we can get a handle on this thing because, if a sufficient number do not take it, then how in the world are we going to overcome it?”

“I was the first one, really, to receive the vaccine at the medical center and I was very anxious to get that vaccine because of my age,” he said. “I certainly didn’t want to get the virus, so I waited patiently until the vaccine became available, then they were good enough to do me number one.”

Williams’ advice to other Veterans is simple.

Williams received a Medal of Honor for his courageous actions on Iwo Jima. When his company commander asked if he could do something about the concrete-fortified pillboxes, Williams “strapped on the flamethrower to go take out some pillboxes.”

Williams took out seven enemy pillboxes with six different flamethrowers as the fighting continued on Iwo Jima. Williams recalled, “If I had an empty flamethrower . . . I probably wouldn’t be talking to you today.”

His Medal of Honor citation reads, “on one occasion he daringly mounted a pillbox to insert the nozzle of his flame thrower through the air vent, kill the occupants and silence the gun; on another he grimly charged enemy riflemen who attempted to stop him with bayonets and destroyed them with a burst of flame from his weapon.”

Williams served as a contact representative with VA in field offices in West Virginia and New Mexico for 33 years.

Watch the six-part series above to hear Williams tell this incredible story himself.