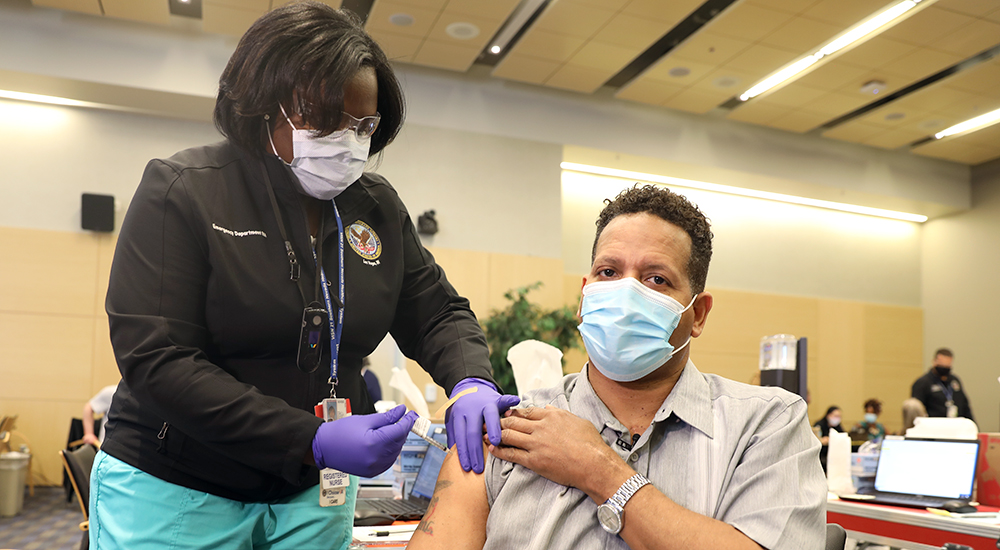 When Marine Corps Veteran Ronald Pipkins walked into the Emergency Department of the North Las Vegas VA Medical Center on March 2, 2020, he had a mild fever and some trouble breathing. A little more than 48 hours later, the 55-year-old was diagnosed with COVID-19, becoming the first case at both the medical center and the entire state of Nevada.

Following both a Southern Nevada Health District and Centers for Disease Control confirmation of COVID-19 on March 5, 2020, Pipkins spent six weeks at the VAMC fighting for his life.

One month of that time was spent on a ventilator in a medically induced coma. During that time, Pipkins remembers very little and his dreams varied greatly from what was happening. “When I closed my eyes, I woke up back in what I thought was reality,” he said. “I felt like I was living in Alaska and there was a whole different life in my mind. But toward the end, it got very dark. I prayed to God, ‘Take me away. Take me away from this.’ And then I woke up.”

Pipkins remained in VA care for three weeks after awakening from his coma. During that time, he underwent intense rehabilitation with VA physical and occupational therapists. Following his release on April 26, he spent a week in a rehabilitation facility before moving into an apartment.

He now shares that with his son, Ron Jr., a freshman at University of Nevada-Las Vegas.

Took a while for my muscles to awaken

Pipkins’ road to recovery has been a difficult one, especially physically. “In my mind I’m stronger and healthier than I’ve ever been, but my body just can’t run the race,” he said. “It’s muscles, joints and endurance. I have arthritis in both of my hands. It took a while for my muscles to awaken.”

Nearly one year after his emergency department visit, Pipkins returned to the medical center on Feb. 24 to receive his first dose of the COVID-19 vaccine (top photo). When he received the call about the getting the vaccine, he consulted with his two children who were adamant that he gets his vaccination.

“More than anything, I did it for them,” he added. “After what they experienced, watching me lay in a coma for a month, I felt obligated. I didn’t want to put them through that again.”

Pipkins and son tell their story in this video:

Pipkins has been a strong advocate for masking following his release from the hospital and is thankful to get vaccinated. “Half a million people have died without a vaccine,” he said. “It makes me think about the AIDS epidemic. Will people still be dying five or ten years from now from COVID-19 because they didn’t do anything? We all just need to get together and get vaccinated.”

While he still finds it strange that he is famous for surviving, Pipkins hopes his journey will help others struggling with their recovery from COVID-19. “I’m that story. I’m getting better, but it’s still an ongoing battle.”

He is currently working on a book detailing his year-long ordeal with the virus.

When asked if he was nervous about returning to the medical center after spending a month in a coma in the same building, he shook his head no.

“I’m always excited to be here because this is where heroes work,” he added. “The people who saved my life are here. I’m always happy to be in the presence of heroes.”