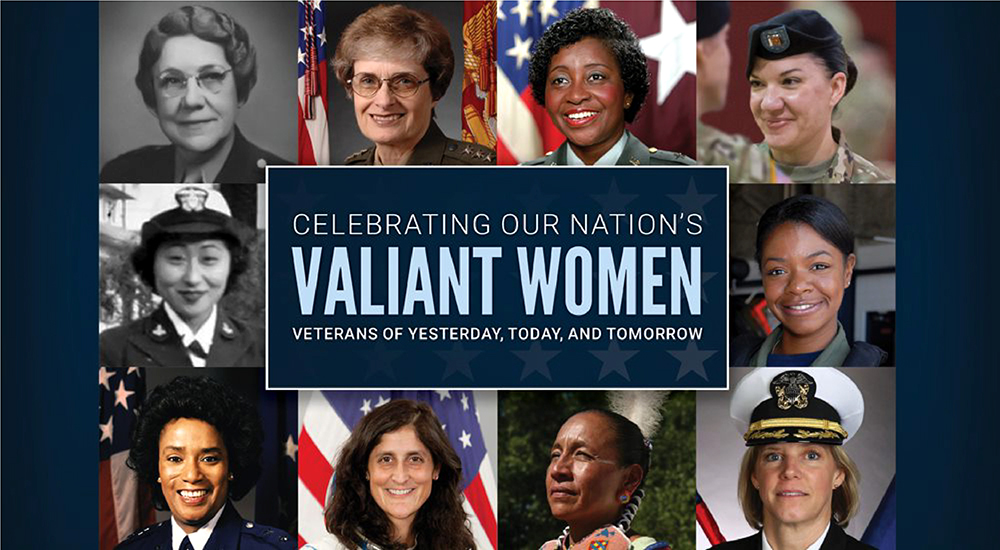 During Women’s History Month, VA celebrates valiant women Veterans of yesterday, today and tomorrow. Women have honorably served in the military for generations and continue to break barriers even today.

This month, VA is spotlighting a few of our nation’s valiant women Veterans to highlight their unique stories of courage, bravery and persistence.

Women were not allowed to serve in the military during the American Revolution, but that didn’t stop them. Deborah Sampson was the first woman known to enlist in the Continental Army. She disguised herself as a man, served as an infantryman and was wounded in action.

Cathay Williams, also disguised as a man, was the first Black woman to enlist during the Civil War and the only known woman Buffalo Soldier. During World War I, about 35,000 women served as nurses and support staff.

Florence Blanchfield was instrumental in advocating for the law allowing full rank for nurses. She became the first woman to receive a military commission in the Army.

World War II saw a significant increase in women serving, especially in the Army and the Women’s Army Corps, where they performed critical jobs such as military intelligence, cryptography and parachute rigging.

At the forefront of computer programming

More than 1,000 women flew aircraft for the Women Airforce Service Pilots. Grace Hopper was a Naval Reservist during World War II. She was at the forefront of computer programming and devised the theory of machine-independent programming languages that was used to create COBOL, which is still used today.

Aida Nancy Sanchez, a Puerto Rican physical therapist, established the first physical therapy clinic at the 95th Evacuation Hospital near Da Nang, serving American and Cambodian soldiers. In 1978, only two years after the Air Force Academy at Colorado Springs began accepting women students, Marcelite Harris became one of the first women to command at the Academy.

Clara Adams-Ender was the first woman in the Army to qualify for the Expert Field Medical Badge, and the first Army nurse and the first Black woman to command a major Army base (Fort Belvoir, Virginia).

On Jan. 24, 2013, U.S. Secretary of Defense Leon Panetta removed the military’s ban on women serving in combat. Today, every military occupational specialty (MOS) is open to women, and active duty service women continue to pave the path for future generations.

Sgt. 1st Class Leigh Ann Hester is the first woman awarded the Silver Star since World War II. She’s also the first ever woman to be cited for valor. The valor citation is for her actions during a close combat firefight in 2005 that took place outside Baghdad, Iraq.

First woman to fly the F-35A Lightning II in combat

Women have shaped the history of the U.S. military. VA recognizes and celebrates these achievements.

Throughout March, VA is recognizing valiant women Veterans and the many VA women employees across social media channels.

Dr. Patricia Hayes is the chief officer for Women’s Health at the Veterans Health Administration.