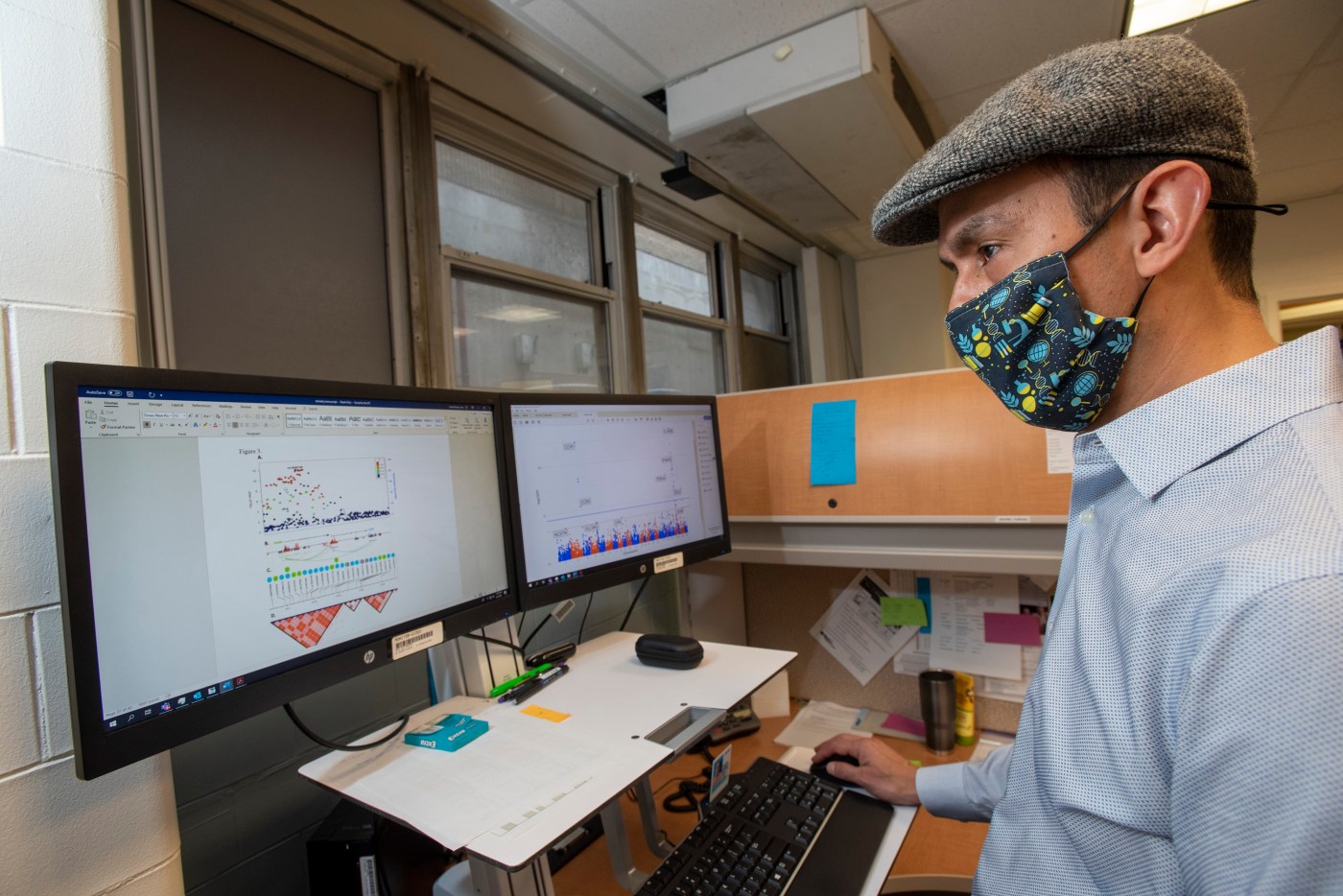 The findings appeared in the journal Nature Medicine in March 2021.

Based on their analyses, the researchers call for prioritizing clinical trials of drugs targeting the proteins IFNAR2 and ACE2. The goal is to identify existing drugs, either FDA-approved or in clinical development for other conditions, that can be repurposed for the early management of COVID-19. Doing so, they say, will help keep people with the virus from being hospitalized.

IFNAR2 is the target for approved drugs often used by patients with relapsing forms of the central nervous system disorder multiple sclerosis. The researchers believe the most promising ACE2 therapy against COVID-19 is a drug that was developed before the pandemic began and has been evaluated in clinical trials to reduce inflammatory response in patients with severe respiratory disorders.

Dr. Juan P. Casas, a physician epidemiologist at the VA Boston Healthcare System, led the study. The research included collaborators from the University of Cambridge and the European Bioinformatics Institute in England, and Istituto Italiano di Tecnologia in Italy.

“When we started this project early last summer, most COVID-19 trials were being done on hospitalized patients,” Casas explains. “Very few treatments were being tested to give to patients early in the natural history of the disease. However, as the availability of testing against coronavirus increased, an opportunity opened to identify and treat COVID-19 patients before they progress to more severe forms that require hospitalization.

“The problem we tried to overcome,” he adds, “is how to identify if existing drugs, either approved or in clinical development for other conditions, can be repurposed for the early management of COVID-19. Most commonly used strategies for drug repurposing are based on pre-clinical studies, such as experiments in cells or animal models. However, those types of studies may have problems of reproducibility or difficulties in translating their findings to humans. That usually leads to higher rates of failure in clinical trials.”

`That kind of genetic study was pivotal’

Casas and his team used genetics as the starting point to identify drugs that can be repurposed for treating COVID-19. Large-scale genetic studies have been widely used to inform drug development programs, with some research identifying COVID-19 drug targets.

Casas, who is also a faculty member at Harvard Medical School, said that they used genetics because, “Given that more than 90% of drugs target a human protein encoded by a gene, the opportunity is there to use genetic variants within those druggable genes as instruments to anticipate the effects that drugs targeting the same protein will have. In other words, genetic studies that used variants within druggable genes can be conceived as natural randomized trials.”

To put things into perspective, he refers to a gene that encodes a protein called PCSK9. The protein is the target of a class of drugs called PCSK9 inhibitors, which are used to lower cholesterol and prevent cardiovascular disease. Researchers discovered that class of drugs because of studies showing that people carrying a certain variant within the PCSK9 gene tend to have high levels of cholesterol and are at greater risk for cardiovascular disease.

Building on these known benefits of genetics for drug discovery, Casas and his team set out to identify all genes that encode proteins that served as targets for FDA-approved drugs or drugs in clinical development. They called this set of 1,263 genes the “actionable druggable genome.” The genes were from two large genetic datasets that totaled more than 7,500 hospitalized COVID-19 patients and more than 1 million COVID-free controls.

By comparing the genetic profiles of the hospitalized patients and the controls, and looking at which drugs target which genes, the researchers were able to pinpoint the drugs most likely to prevent severe cases of COVID-19 that require hospitalization.

The two datasets were VA’s Million Veteran Program (MVP), one of the world’s largest sources for health and genetic information, and the COVID-19 Host Genetics Initiative, a consortium of more than 1,000 scientists from over 50 countries working collaboratively to share data and ideas, recruit patients, and disseminate findings.