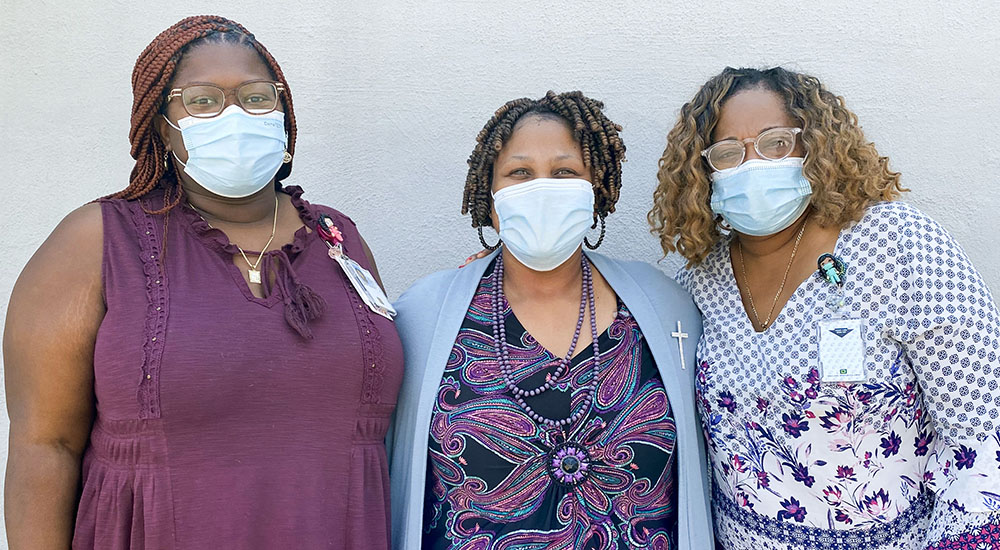 Three nurses from the Birmingham VA Health Care System went above and beyond the call of duty when they encountered a young woman outside their building who needed help.

Meme Barron, Stephanie Christian and Elonda Hendley, nurses in the community care department, were informed there was a young adult female sitting in a flowerpot outside the building.

She was wearing a hoodie and sweatpants during the heat of summer in July.

“When I saw her, I knew she was young and my intuition told me to help her,” said Barron. “As a mother, the first thing I thought of was that this is somebody’s child.”

After giving her water, the nurses asked if they could do anything to help her. Without making any eye contact, the girl asked them if they could call her dad and tell him that she is okay.

“I called the number and when a man picked up, I told him there is a girl here and she wants me to tell her dad that she’s okay,” Barron said. “I gave him her name and asked if he knew her and he said, ‘Yes, that’s my daughter who has been missing.’”

Thirty minutes later, the dad reunited with his daughter after not seeing her for several months.

“We’ve been looking for her since March,” the father said. “I haven’t been able to eat or sleep since she’s been gone, and it has taken a toll on me because I didn’t even know if she was alive.”

The father of seven said his daughter’s mother passed away 10 years ago and she has since struggled with mental health issues.

These nurses are angels.

“I’m grateful these nurses showed concern and went to see about her or she would probably still be missing. They are angels,” the father said.

The nurses made sure to follow up with the father and daughter. The girl’s father is an Army and Air Force Veteran who receives care at Birmingham VA.

“Sometimes all it takes is just seeing about someone and taking the time to show that you care,” Barron said.

By Emily Smallwood is a public affairs specialist at the Birmingham VA.