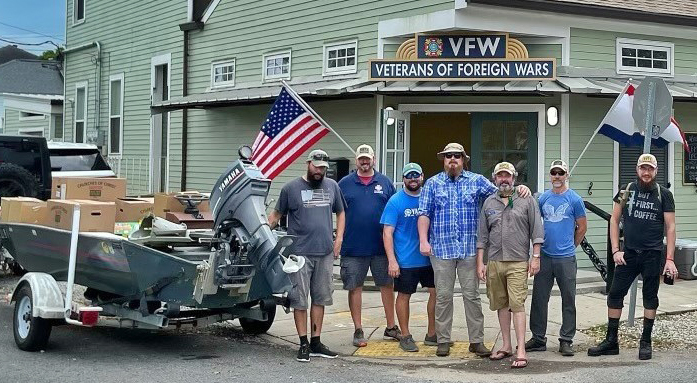 Chris Cox loves his hometown of New Orleans, Louisiana. Hunkering down during Hurricane Ida, he knew how great the need would be for his fellow Louisianans once the storm passed.

A sign at the VFW Post in New Orleans offering free food to all who stop by.

Cox, a retired Marine Corps master sergeant, is no stranger to helping those in need. As a journalist in the 1990s, he covered humanitarian efforts during Operation Support Hope.

The operation airlifted supplies to Rwandan refugees sheltering in Kenya. He also reported on humanitarian assistance in Macedonia.

“Down here, in Louisiana, we take care of our neighbors,” Cox said. “It’s not about being the hero of the neighborhood. It’s a matter of caring for each other.”

Cox is also commander of the Alfred E. Flynn VFW Post 8973. After Hurricane Ida, he and a few of his VFW members decided to turn their post into a place where anyone in the city could stop for a bite to eat and a bottle of water.

Many residents donated from their freezers and refrigerators, even restaurants that couldn’t save their refrigerated and frozen supplies donated to the effort.

“We were taking whatever we got and turning it into meals,” Cox said. “For anyone passing by, work crews, tired residents cleaning up their damaged homes, we are here. For many, this is the first hot meal they’ve had in days.”

VFW members and families pitched in to help. The post served two meals a day between Sept 1 and 6, lunch and dinner, for 1,800 meals total. Also, over $25,000 worth of donated food, fuel, dry goods, baby and sanitary supplies, and ice have been distributed locally and throughout the areas outside New Orleans hardest hit by Ida.

Chris Cox: “It’s a matter of caring for each other.”

A few neighbors saw the unusual activity and began helping Cox and his helpers. One of those, a young Marine Veteran familiar with the shared commitment to serving others during times of hardship, is now a VFW member at the post.

Cox said he is lucky because his home suffered very minor damage. He noted that all members of “NOLA VFW” are safe and accounted for, although many have heavily damaged or even destroyed homes.

“Disasters like this are a very familiar environment to Veterans,” Cox added. “Lots of us have provided humanitarian relief in the Middle East, Haiti, and other places so we know how to do this.”