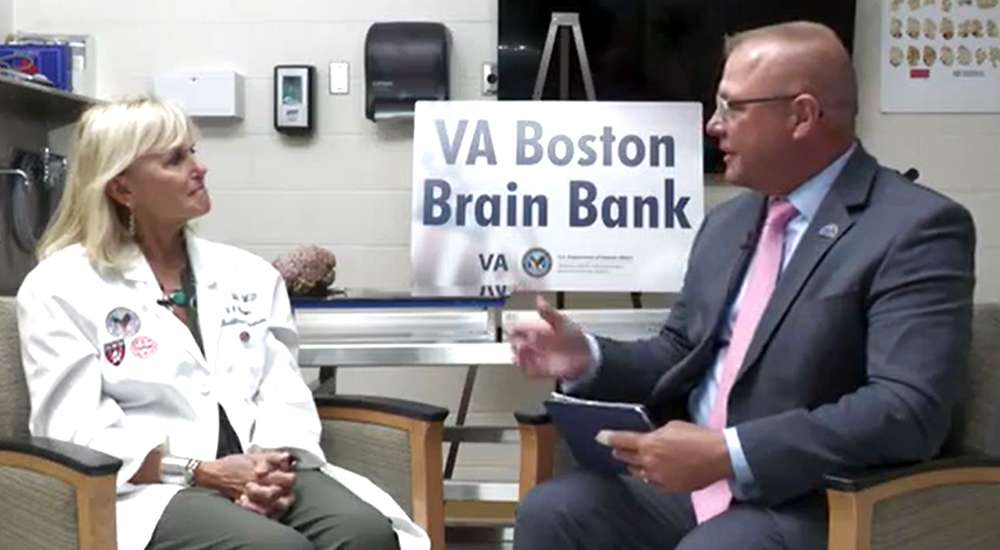 In this week’s edition of Chats with the Chief, VHA Chief of Staff Jon Jensen sits down with Dr. Ann McKee, chief of Neuropathology at the VA Boston Healthcare System and director of the Boston University Center for the Study of Traumatic Encephalopathy.

McKee studies the long-term effects of hits to the head on the brain.

McKee worked in Alzheimer’s research for ten years, studying the brains of Veterans who had passed after being diagnosed with Alzheimer’s and dementia. Then she made a discovery that changed her career and our understanding of brain injuries: While dissecting the brain of a Veteran and former world champion boxer who had been diagnosed with dementia or Alzheimer’s, McKee noticed that the brain did not show any signs of either.

Instead, it showed levels of a different protein – the tau protein – that were far beyond what she had seen in most of the brains she had studied.

So, she set out to study the brains of more Veterans who had experienced repetitive hits to the head over a long period of time, as would be typical of a boxing career.

McKee’s research was supercharged in 2008 when the National Football League asked her to look at the brain of a former NFL player. To her astonishment, she saw the same disease she had been seeing in Veterans with a long history of small head traumas.

Today, we call this disease chronic traumatic encephalopathy, or CTE.

While the signs of CTE – such as mood changes, depression and trouble sleeping – are noticeable, it can only be diagnosed by dissecting the brain. Thus, it cannot be diagnosed in living people, but McKee is on a mission to change that.

Today, she operates a brain bank with over 1,100 brains that have been affected by traumatic brain injuries, 600 of which have been diagnosed with CTE. And she continues to collect more from family members looking to better understand their loved one’s struggle and contribute to her research.

She hopes that by better understanding the disease, we can find new ways to diagnose and treat patients while they are still alive.

She tells Jensen in the video above, “I just want all the people that are suffering out there to know my heart goes out to them. And I am really hopeful that this work will bring greater knowledge and an end of suffering.”