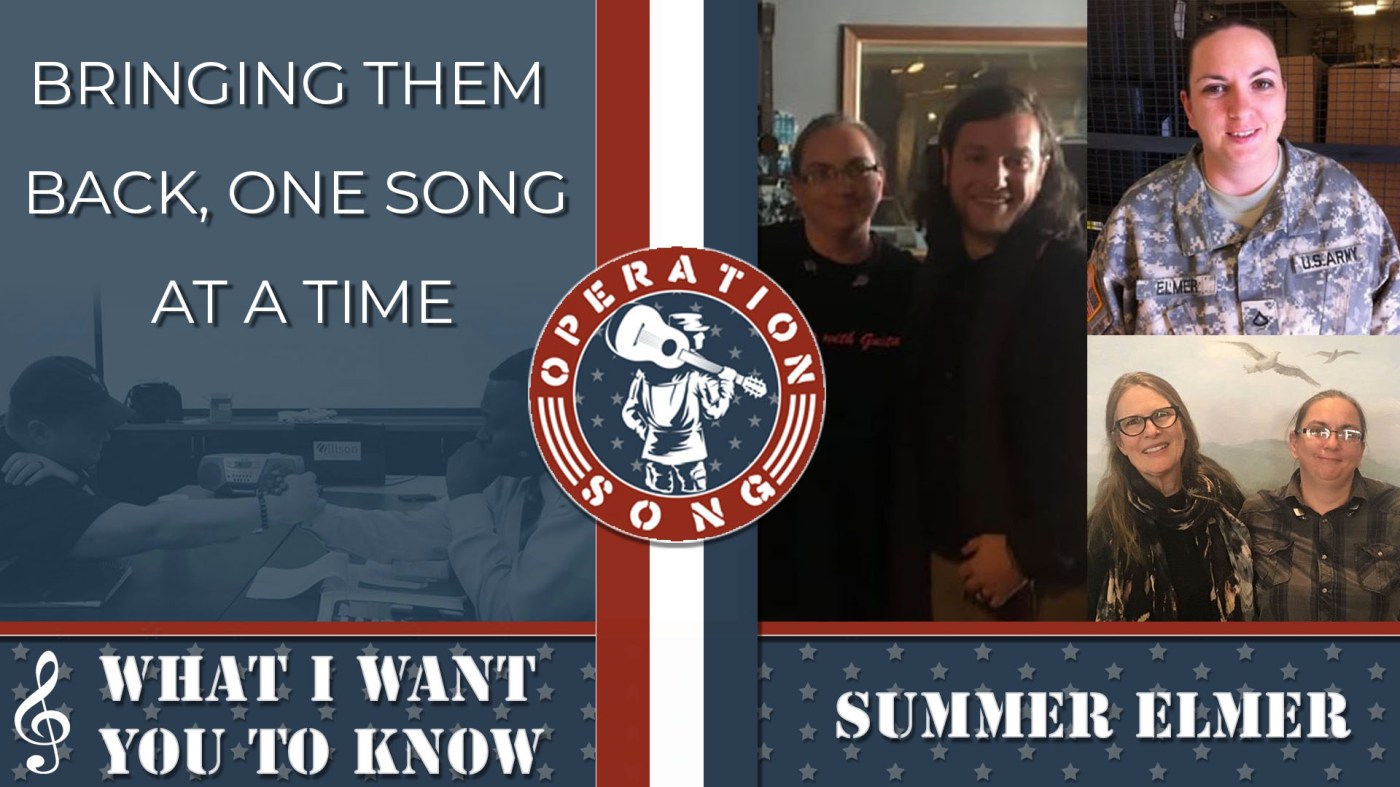 This #OperationSong spotlight is on “What I Want You to Know” by Army Veteran Summer Elmer, with help from songwriter Angela Kaset.

Summer Elmer was raised in Nashville, Tennessee. Inspired by her family members who had served in the military (specifically the Army), she decided to follow the “family tradition” by enlisting. Before joining, Elmer participated in the Reserve Officers’ Training Corps (ROTC) in high school. When she graduated, she was a captain, company commander and color guard commander. She also attained expert marksmanship on the rifle team.

Elmer enlisted in the Army in November 2002. She completed basic training and advanced individual training at Fort Jackson, South Carolina, in April 2003. Elmer remembers wanting to quit, but that her “[The drill sergeant] wouldn’t let me quit. He talked to me and made me see that we were almost finished, and I was doing well.”

Elmer was stationed at the Schofield Barracks in Honolulu, Hawaii, where she was primarily accountable for correctly filing information concerning awards, schools, promotions and anything else needed into soldiers’ permanent files. She also updated dependent and life insurance policy paperwork. Typically, her day would start with physical training at 6:15 a.m. She would then have some free time, before receiving her assigned duties for the day at 9:00 a.m.

In 2004, Elmer became pregnant, resulting in her being discharged one year early under Chapter 8. Her husband had been deployed to Iraq, and she would have been sent to Afghanistan, which would have left her infant daughter without either parent. However, Elmer reenlisted in 2009 and served three more years. She was stationed at Fort Hood, Texas, where her duties were very different from her time at Schofield Barracks.

After leaving the military, Elmer worked as a childcare provider in two state-run child placement facilities. One acted as an emergency placement for children entering the court system, and the other was for children already involved in the system.

In Nov. 2019, Elmer attended an Operation Song retreat in Nashville with nine other Veterans. Her friend – a recreational therapist at the Louis A. Johnson VA Medical Center in Clarksburg, West Virginia – had recommended Elmer to attend the retreat. It was there that she wrote “What I Want You to Know” with songwriter Angela Kaset. The song focuses on Elmer’s children, whom she had not seen in five years at the time of writing the song and describes Elmer’s own troubled childhood. She wanted to express her love to her children through this song. (At the time of writing this post, Elmer has been reunited with her children). Elmer described the experience of attending the Operation Song retreat as “beautiful” and praised Kaset’s patience and understanding while writing the song.