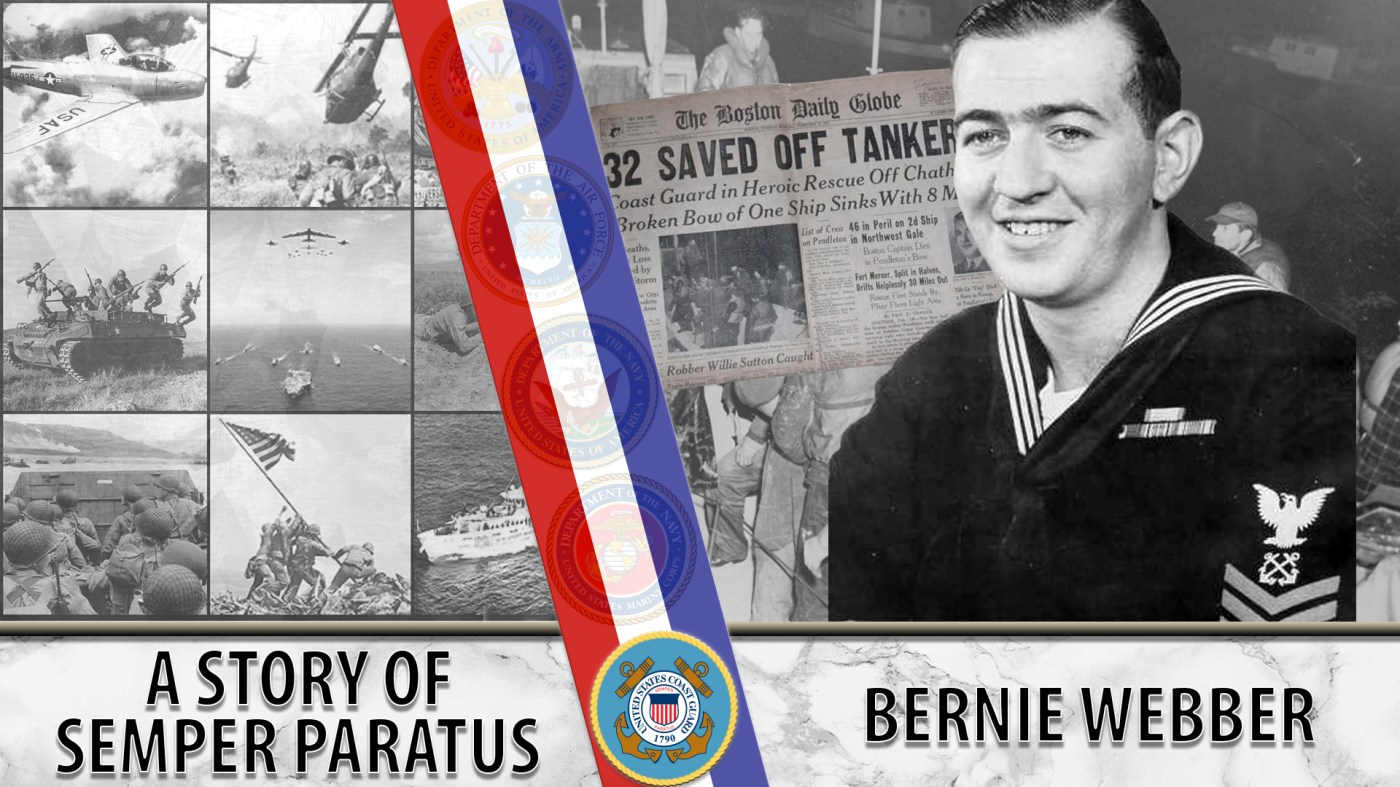 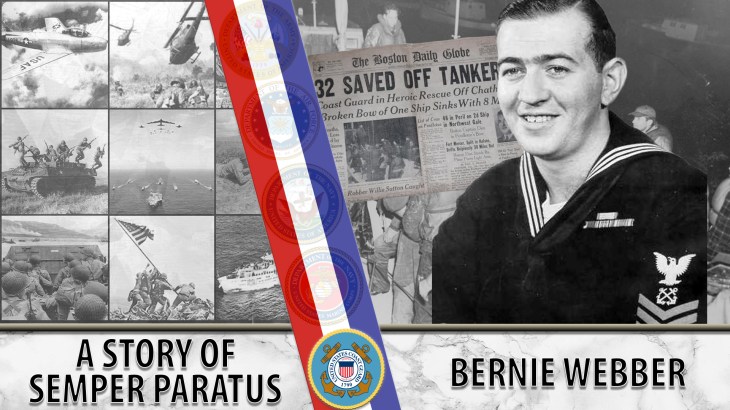 Bernie Webber led one of the greatest Coast Guard rescues in history that was later chronicled in the book and movie, “The Finest Hours.”

Massachusetts native Bernard Challen Webber was born in May 1928. His parents, Rev. A. Bernard Webber and Annie Knight Webber, wanted him to become a minister, but he chose a different route of service and joined the Merchant Marines at age 16. After World War II, he joined the Coast Guard in 1946.

In mid-February 1952, Petty Officer First Class Webber was at his station in Chatham, Cape Cod, Massachusetts, during a severe nor’easter. Two tankers, SS Fort Mercer and SS Pendleton, both cracked in half off the coast of Cape Cod. The SS Fort Mercer sent out the Morse code distress signal “Save Our Souls” (SOS), and the Boston and Nantucket Coast Guard crews embarked on a rescue mission  to the tanker. No SOS was sent out from SS Pendleton because when it split, the front of the tanker sank rapidly. The navigation instruments and officers also went down, rendering an SOS alert impossible.

The Chatham Coast Guard spotted the surviving half of SS Pendleton floating in the swells. Webber was ordered by the Chatham Station commanding officer to assemble a crew for a rescue mission. Three men volunteered: Richard Livesey, Andy “Fitz” Fitzgerald and Ervin Maske. At just 24, Webber was the most experienced of the crew as they set out on a 36-foot lifeboat.

The mission off of Chatham was dangerous because it occurred at night and the wave swells were 70 feet high. They set out into the “graveyard of the North Atlantic,” which spans from the tip of Provincetown to the elbow of Chatham. This stretch of water’s nickname comes from the over 3,000 shipwrecks that have occurred over the past couple centuries. Despite the treacherous conditions, Webber and his crew set out for the rescue mission.

While passing through the Chatham Bar, the massive waves broke the windshield and dislodged the boat’s compass. Equipped with a searchlight, the crew was able to judge the wave patterns to avoid being destroyed by a swell, and Webber skillfully captained the crew to SS Pendleton. 32 of the 33 men onboard were saved.

Webber and his crew were awarded the Gold Lifesaving Medal, one of the highest honors a Coast Guardsman can earn, for their commitment to the Coast Guard motto, “Semper paratus.” Webber continued his military service, which included a tour in Vietnam as a member of Operation Market Time. He retired after 20 years of service with the rank of chief warrant officer.

Webber and his wife, Miriam, had two children and several grandchildren. The couple spent their retirement years in Melbourne, Florida, during the winter and lived in Cape Cod, Massachusetts, in the summer.

Webber died in January 2009 at age 80, but his legacy lives on. The first-in-class Sentinel-class cutter, USCGC Bernard C. Webber, was named after him to remind future Coast Guardsmen of his service. His memoir, “Lights, Lighthouses, and Lifeboat Stations: A Memoir and History” was published in 2015. A book, “The Finest Hours” was written about the great small boat rescue, and Disney released a movie with the same title in 2016. To this day, Webber is known as one of the greatest Coast Guardsmen to have served.