SSVF Changes the Future of a Homeless Vet 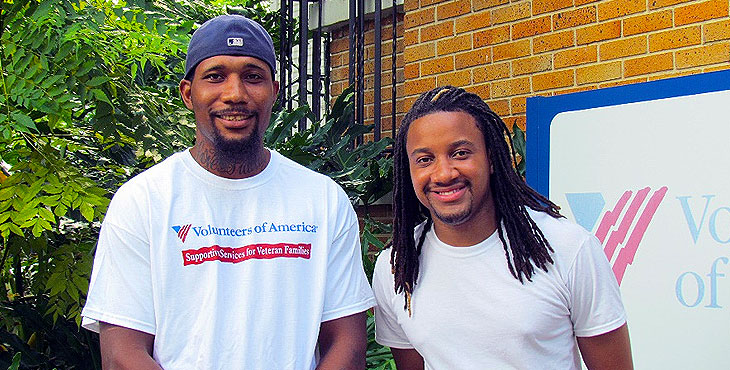 In a region still recovering from the aftermath of Hurricane Katrina, employment and housing can be difficult to come by for many Veterans. New Orleans has a high incidence of Veteran homelessness compared to other cities of its size. According to the 2013 Point-in-Time Estimates of Homelessness released by the Department of Housing and Urban Development, 11 percent of the city’s homeless individuals are Veterans.

Outreach workers from Volunteers of America Greater New Orleans, the local affiliate of a national human service charity, first located “Mr. H.” living in the library at Loyola University. The 28-year-old Veteran was close to giving up hope on achieving a brighter future for himself and his six children.

As a case manager, my mission is to advocate for Supportive Services for Veteran Families (SSVF) clients, building relationships with individuals and organizations in the city that can connect them with the resources and opportunities they need to get back on their feet. Being able to draw from those networks is vital to finding employment and housing for people like Mr. H. It’s this type of collaboration that is helping to end Veteran homelessness in New Orleans. According to the Interagency Council on Homelessness, Veteran homelessness in New Orleans has decreased by more than 40 percent in the past year alone.

Mr. H. was referred to SSVF in early July. Within a week, he was employed and placed in permanent housing. Through collaboration with the VA Compensated Work Therapy program, I connected Mr. H. with a job interview at a construction company, and drove him to his appointment. The position was a perfect fit for Mr. H.’s background in plumbing and heating, ventilating, and air conditioning (HVAC), and he was hired on the spot. SSVF connected Mr. H. with supplies such as tools, uniforms, and footwear to begin his new job, and as his case manager, I have provided continued support as he transitions from homelessness into permanent housing and the job environment.

Mr. H. seems like a completely different person from the man I met two months ago. He is thriving in his own home, with a stable income to maintain his living expenses and support his family. More importantly, he has regained the strength, motivation, and courage he needed to become self-sufficient and serve as a positive role model for his children. After three years of working with the homeless population in New Orleans, it never ceases to amaze me how rewarding it feels to play a role in such a transformation.

The U.S. Department of Veterans Affairs, in partnership with the Department of Housing and Urban Development (HUD) and the U.S. Interagency Council on Homelessness (USICH), launched the 25 Cities Effort in March 2014 to help communities with high concentrations of homeless Veterans intensify and integrate their local efforts to end Veteran homelessness by 2015. Community-based programs and services for homeless individuals, such as Volunteers of America Greater New Orleans’ Supportive Services for Veteran Families, are partners in the 25 Cities Effort in their local communities.

For more information about homelessness or to help a Veteran visit http://www.va.gov/homeless/index.asp or call. For a Veteran who is homeless or at imminent risk of becoming homeless, make the call now to 877-4AID-VET (424-3838).

DaVaughn Phillips is a case manager for Volunteers of America Greater New Orleans. As a graduate student working toward his master’s degree in Social Work from Southern University at New Orleans, Phillips is dedicated to helping Veterans with supportive services in the community. He has been employed with the agency for the past three years and is active in various community initiatives focused on rebuilding New Orleans following Hurricane Katrina.