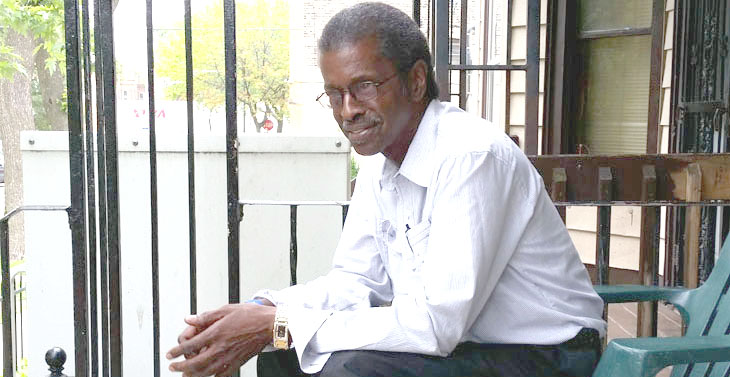 Chicago Army Veteran Johnnie Mims, 60, has a mind like a steel-trap — capable of rattling off to the day and maybe the hour — the length of time since he left the military. After his service ended in 1975,  Mims looked forward to applying his military experience and talent to civilian life. He got a job at the U.S. Postal Service. He married. He had daughters.

Within about 10 years, though, problems surfaced. He split with his wife in 1984. He began using alcohol. Life issues accumulated until he was no longer able to hold down a job. Lacking steady income, he became homeless and remained without a permanent home for 19 years.

Bright spots appeared during this time: Thanks to a 45-day treatment program at the North Chicago Veterans Affairs (VA) facility, Mims achieved sobriety in 1993. He obtained odd jobs helping his buddy sell golf equipment. He worked on and off at VA facilities. He looked after his grand kids.

Yet he often didn’t feel well and regular employment eluded him. He spent years living with his daughter, without a home of his own.

Not one to give up,  Mims continued to visit Chicago-area VA facilities, where he received medical care and other VA services.

His life was transformed in 2015, he said, when he got a spot in VA’s Compensated Work Therapy (CWT) program at Jesse Brown VA Medical Center. CWT helps prepare under- or unemployed Veterans like Mims for competitive employment.

“CWT changed my life,” he said. “I worked in the wellness center helping Veterans exercise and exercising myself. I enjoyed being around other Veterans. Vets learn from other Vets, and I learned a lot.”

CWT assigns Veterans jobs that pay a nontaxable stipend, which in Mims’s case was between $400 and $500 every two weeks. “I had a job and a fitness routine,” he said. “I started feeling better.”

He also secured housing with assistance from the Housing and Urban Development-VA Supportive Housing program.

As one of her first acts as Jesse Brown’s CEC, Beatrice Smith-Redd in May 2015 arranged a hiring event with the U.S. Postal Service (USPS). At the VA-hosted event,  Mims and 29 other Veterans learned how to navigate the complicated online postal job application process. Once applications were submitted, applicants were to check emails daily and respond to any information requests within three days.

According to Smith-Redd, Mims approached the task with remarkable tenacity. Although he could review email on his phone, he had to use VA’s computer lab to respond to USPS inquiries.

“Every time Mr. Mims received an email, he came to VA in person—four or five times during the process—to respond right away,” Smith-Redd said. “And then one morning as I went to work, I saw him at the bus stop in a suit, tie and overcoat—he was on his way to an interview.”

In July 2015, Mims landed a temporary job as a USPS custodian, for $13.25 per hour. His supervisor praised the quality of his work and his co-workers enjoyed working with him.

Still, he wasn’t quite satisfied — he was determined to convert his temporary position into a permanent one within a year. Beating his own goal, he became full time in eight months, and now earns a comfortable salary, overtime pay and benefits. The permanent spot offers more opportunity for promotion. “I feel good,” he said.

“As Mr. Mims shows, it’s never too late to start again,” said Smith-Redd. “Every time I see him, he’s smiling. Dreams can come true at any age.”

It helps even more, she added, when employers like USPS are willing to work with CECs and Veterans on navigating job application processes and accessing meaningful employment.

The other part of the equation, Mims said, is that Veterans must never give up, no matter their situation.

Learn about VA employment initiatives and other programs for Veterans exiting homelessness at www.va.gov/homeless.

Veterans who are homeless or at imminent risk of becoming homeless can call or visit their local VA Medical Center, where VA staff are ready to assist. Veterans and their families can also access VA services by calling 1-877-4AID-VET (1-877-424-3838).

Michael Taylor – director of homeless Veterans outreach and strategic communications – joined the VA Office of Public and Affairs in 2010.  He holds a Master of City and Regional Planning (MCRP) degree and has worked as a survey statistician, public housing redevelopment analyst and local government program administrator.