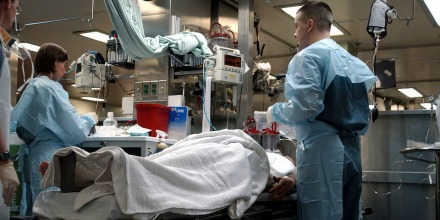 What’s your image of a nurse? If you came of age in the ’50s or ’60s, you may remember when nursing was one of the few careers open to women, who dominated the ranks of nurses in those decades. In fact, of the Nation’s 3.6 million nurses, males still only account for about 10 to 11 percent. That is why the Grand Junction, Colorado, Veteran’s Administration Hospital is proud that between 25 and 30 percent of its nursing staff are male nurses.

In 2013, Minority Nurse reported that the entire VA has more male and ethnically diverse nurses, accounting for almost 15 percent of its workforce nationwide, while overall national figures then were in the 6 percent range.

That same year, an article in Minority Nurse traced the changes in nursing from a field exclusively for men to one mostly dominated by women. It actually took the Supreme Court in 1982 to assure the rightful place of men in the profession. The Court ruled that a registered nurse’s (RN) constitutional rights were violated when he was refused admission into a baccalaureate degree program at Mississippi University for Women’s School of Nursing. Justice Sandra Day O’Connor stated that “excluding males from admission to the School of Nursing tends to perpetuate the stereotyped view of nursing as an exclusively woman’s job. The policy lends credibility to the old view that women, not men, should become nurses, and makes the assumption that nursing is a field for women a self-fulfilling prophecy.”

Sometimes military and nursing interests go hand in hand for men. In an article in The Daily Texan – the community newspaper for the University of Texas at Austin – Josh Ruiz, a junior in their nursing program, says that this ambition stems from his childhood: “When Ruiz was 5 years old, he found himself in the emergency room for a minor head injury from a baseball bat. A male nurse gave him 14 stitches and made him laugh, and from that day forward, Ruiz said he knew he wanted to go into health care. After years of unwrapping stethoscopes and medical supply kits on Christmas, Ruiz decided to pursue nursing in the military. He said he had a desire to serve after growing up with a father in the Air Force.”

However, Ruiz, the only remaining student in UT’s now-canceled Naval ROTC program, realizes that the profession still faces an uphill battle for men. Males account for only 11 percent of enrollees in the School of Nursing, and there are only six men in Ruiz’s 2017 graduation class. Ruiz cites the long-term gender stereotyping that caused people to tell him that nursing was a “feminine” job in contrast to being a physician. Meanwhile, the Department of Veterans Affairs, Office of Nursing Services has laid out a road map for nursing that should be attractive to anyone with an interest in health care, excellent compensation, continuing education and innovative challenges.

Last year, in The American Nurse magazine, VA Secretary Robert McDonald expressed his vision for the future of nursing. VA, which serves 9 million Veterans, is the largest employer of nurses in the Nation, with approximately 89,000 of myriad specialties nationwide. McDonald said VA is actively recruiting RNs while especially seeking nurses interested in Veteran-focused research and innovation.

If you are interested in exploring the dynamic possibilities of the nursing field at VHA, opportunities have never been better, we invite you to Join Us.