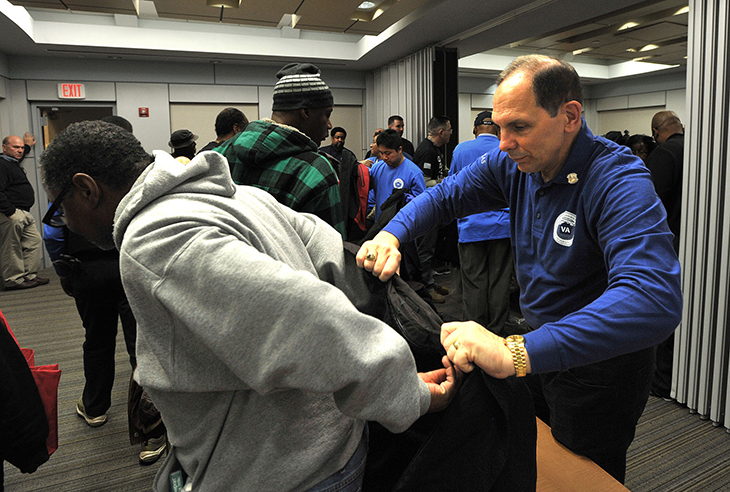 The following was written by VA Secretary Bob McDonald for the Southern California News Group and first appeared in the Pasadena Star News.

Seven years ago, President Obama and VA named ending Veteran homelessness a top priority. No one who fought for this country should sleep on the streets. Period. So we got to work, and with the help of the first lady’s Joining Forces Initiative and Mayors Challenge, we’ve forged powerful partnerships among federal, state, and local agencies and nongovernmental organizations. As a result, we’ve cut Veteran homelessness nearly in half – down 47 percent since 2010.

Today, we better understand what causes homelessness and can better prevent it. Problems with physical and mental health, addiction, poverty, limited social support, and lack of community resources and affordable housing all contribute to Veteran homelessness. Compared to the general population, Veterans are more likely to suffer from post-traumatic stress disorder, traumatic brain injury, and mental illness.

Fortunately, all of these things are treatable. We know that Veterans in our care are less likely to commit suicide, commit crimes or end up homeless. So our focus has been on getting at-risk Veterans into the VA healthcare system.

For those who have already fallen into homelessness, we’ve employed a proven strategy called “Housing First”—because treating Veterans for any condition is a lot easier once their basic need for shelter is met.

This was achieved by providing communities the resources and best practices to succeed. We are ending Veteran homelessness community by community.

Our greatest challenge has been in Los Angeles. That’s why the reduction of Veteran homelessness by more than 1,000 Veterans in Los Angeles County last year, more than any city in the nation, is proof we can succeed.

When I came to VA, I learned we were in the midst of a lawsuit prohibiting us from developing on our almost 400-acre West LA campus. Over time, VA made the decision to rent out parts of the campus to organizations that had no affiliation or positive impact on Veterans. I saw an opportunity to return the campus to its originally intended purpose: to be a home for Veterans. Many members of the community had been advocating for this for years and, in ending the lawsuit, we found our partners.

VA developed a master plan for the campus centered around input from Veterans and the community. Our focus was making our expansive campus a home for those Veterans who had the most need. We listened to input and slowly rebuilt trust with the community. Exactly one year after we announced an end of the lawsuit, we adopted and shared our blueprint for the VA campus outlining how homeless clinical care and services would operate. As we did, our partners stood with us shoulder-to-shoulder. All the VA services that could help a Veteran at risk of homelessness would be in one location. Every remaining tenant on the campus would have a clear goal of helping Veterans. Today, VA’s West LA campus will be the model for what 21st century healthcare should look like.

The coalition of the willing in Los Angeles is indicative of the coalitions I’ve seen built across the country: mayors, members of Congress, state and county officials, local housing authorities, nongovernmental organizations, landlords and developers, philanthropic donors, and our very own VA employees.

At VA, we know we cannot do it alone. A key strategy of the MyVA transformation, the biggest transformation in VA’s history, is embracing strategic partners. There is no better example of the big challenges we can solve together than our fight to end Veteran homelessness.

Homeless in the richest nation in the world is an embarrassment; and in solving it, we began by focusing first on those who were Veterans. Frankly, our progress was achievable because a coordinated network of health care, financial benefits and job training services exist; they exist in VA. As we continue to end homelessness, I know the lessons we learned housing those who have served our nation will serve as a blueprint for ending homeless for all Americans in need.

This article first appeared in the Pasadena Star News.