Veteran artist shares her passion for writing and painting about wildlife 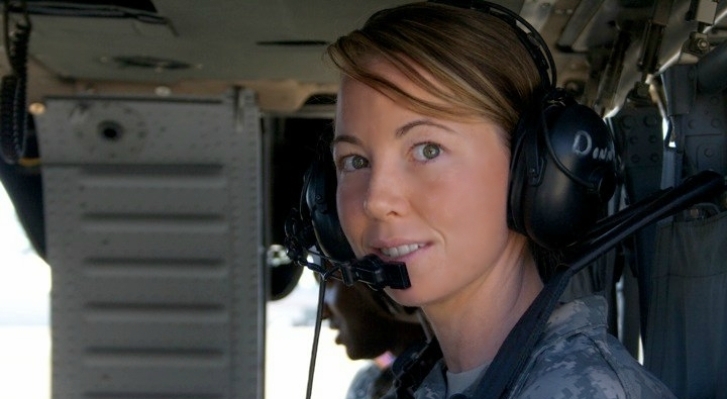 The following is a story I wrote a few years ago from a perspective of how peaceful and therapeutic fishing can be. Not even catching but the pursuit, if you will, of happiness. Fish have become my whole world. I work full-time as a wildlife and fisheries biologist for the South Carolina Department of Natural Resources and after serving six years in the Army, I was ready to make a commitment to conservation. My job, although stressful at times, provides an inner understanding of what I’m about, what I’ve been through, and what I can provide for our future generations. I encourage everyone to get outdoors and experience what nature has to offer. As an artist, accepted as a Women’s Veteran Artist finalist, I chose to represent fish. This March, you can see my art of a tarpon, as well as the other finalists’ art at 10 VA facilities across the nation.

The felt-bottom shoes were gripping the slippery rocks that lined the river as I made my way across to what I deemed the best spot for smallmouth bass. I could hear the great blue herons call out as I spooked them from their feeding spots. The slow, rhythmic sound of the water tumbling through the gates was getting closer, and I even closed my eyes momentarily to imagine a waterfall, making the hydrodam disappear. The landscape was beautiful with the leaves changing to vibrant reds and oranges and the sky an open blue. The colors reminded me of the desert, a place where I came here to forget. After taking in the moment, I realized my biggest worry was crossing the deep pools without having water leak into my waders; I am barely over five foot. Plus, the river water was cold. With the idea of bone-chilling water ruining my morning, I slowly made my way across the river, picking out each foothold very carefully. After arriving to my spot, I readied my rod for the day’s fishing and hopefully, catching.

The crisp, cool autumn morning was perfect for smallmouth fishing; a break from the chaotic familiarity. It was a weekday so having the river all to myself was a nice addition although the dam operators sounded the alarm constantly, jolting me into fright every time. You would think being in the Army would have dulled my senses to loud noises but the startling sound disrupted my sense of peace; but I was not going to let the inconvenience of an alarm discourage my attempts of finding what I was after.

The flow was perfect for drifting my Senko worm, and with every drift, existed the chance to obtain that initial feeling of excitement. You know, that feeling of a fish nipping at the bait and your rod tip bouncing unnaturally? Well, the first couple of casts produced nothing of those feelings. Not even a nip. And I was okay with that. I knew there were smallmouth in the area; I have caught them before; before when the world was simple and life floated along like the leaves in the water. I knew I could catch them but today was different. Today was about finding that inner peace that true fishermen (and fisherwomen!) obtain by not necessarily catching a fish but the act in doing so. I was happy to have a rod in hand and water surrounding me.

After wading from rocky spots to shallow ripples, I returned to the original spot from the morning’s venture. I cast my line out, watching it drift, and the most excitable feeling came across me. I felt the gentle tug of a fish on the other end of the line. I slowly reeled in all of the slack until I could feel a fish start to fight. Then I did the “Bill Dance” and jerked the rod hard. Oh! I had one. I fought it for a few seconds and landed what I was after: a smallmouth bass. Now, you may look at this picture and wonder why I snapped a picture of myself with such a small fish. To me, fishing is not about catching a trophy fish; it is about losing oneself in a bigger connection with the living world; it gave me the opportunity to immerse myself into a form of meditation that all true fishermen seek. My little fish was that connection.

VA’s Center for Women Veterans partnered with the Veteran Artist Program, a nonprofit dedicated to fostering and promoting Veteran artists. The call for submissions resulted in nearly 400 pieces of art being sent in from more than 100 women Veterans around the country. The Veteran Artist Program selected 10 works to be featured on storyboards, each of which will include an image of the work of art, photos of the women in and out of uniform, and a brief biography.

About the author: Pamela Corwin is a wildlife and fisheries biologist for the State of South Carolina. She served with the 218th Combat Support Battalion in Charleston, South Carolina, from 2008 to 2014 as a human resources specialist, suicide prevention program coordinator and a fitness and health NCO.