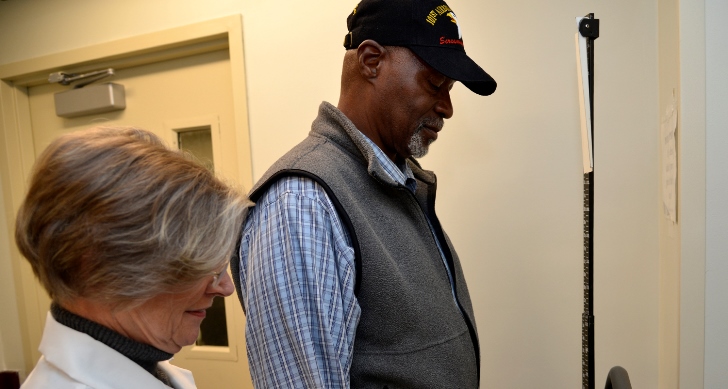 During March we celebrate National Nutrition Month.  Now that it’s been a few months our New Year’s resolutions to eat healthier, this is a good time to refocus our attention on proper nutrition. This year’s theme is “Put Your Best Fork Forward” – a good reminder that each bite, lick and taste counts when adding up those daily calories.

Are you looking for a little motivation to keep you on track? Meet Razzi Odom and Curtis Moody who are dropping pounds with the help of the Ralph H. Johnson VA Medical Center’s MOVE! Weight Management Program.

Sixty-two-year-old U.S. Army Veteran Razzi Odom was experiencing pain in his knees and back and only sleeping about three hours per night when he decided to do something about it. In September 2016, weighing 268 pounds on a 6-foot, 3-inch frame, Odom enrolled in MOVE! with a goal to lose 31 pounds and feel better.  So far he’s down to 240 pounds and sticking with it!

“The meetings really keep you motivated because you learn so much there,” said Odom. “It’s motivating to see the other Veterans losing weight and learning how they cook their food.”

Charleston VAMC MOVE! meets every Tuesday at 10 a.m. in medical center’s main auditorium. The program is designed for Veterans who are currently overweight or obese, with a BMI of 25 or greater.  The meetings are a time for nutrition and physical activity education along with a weekly weigh-in.

“I learned how to eat,” said Odom. “Now I know when you get full to just stop. The program also introduced me to a whole bunch of new foods and they even taste good!”

Curtis Moody participates in MOVE! class at the Ralph H. Johnson VAMC on February 21, 2017. Mr. Moody has lost twenty pounds while participating in the program. The MOVE! program is a weight management health promotion program designed to improve the lives of Veterans.

Odom traded in fried foods for squash, zucchini and asparagus, is now eating bread and potatoes without butter, and has even transitioned to drinking his coffee black—leaving out the extra sugar and creamer he once added. He has also joined a gym and goes three times a week to ride the stationary bicycle and lift weights.

“I started looking at calorie count for the first time,” said Odom. “When I go to a restaurant I take half the portion home with me. I don’t eat it all at once.I’ve already gone from a 48 inch waist to a 42. I had to put another hole in my belt,” he said, noticeably excited to see the results.

Odom reports his knees are feeling “terrific.” He still has a little bit of pain, but nothing like what it used to be; his lower back is also feeling better.  His new found healthy lifestyle has also improved his sleep patterns, now up to about six hours per night.

Because of the MOVE! program, Odom recently signed up to be a volunteer at Charleston VAMC. He recognizes that coming to the VA will be something that keeps him active and out of the house—all while helping other Veterans in the medical center.

You might think that weight loss is a young person’s game, but take notes from 84-year-old U.S. Navy Veteran Curtis Moody, who proves that you can get fit at any age. At 221 pounds, the Charleston VA Pain Management Clinic referred him to MOVE!  In just three months, Moody has already dropped 24 pounds and incorporates lifestyle changes with his sights set on a goal of 180 pounds.

“I’m feeling good and I have more energy,” said Moody. “I know that this all depends on me.  If I don’t do it, it’s not going to get done and I want to meet my goal.”

Moody has limited mobility, walking with a cane, but he doesn’t let that stop him from getting daily exercise.  He walks around the neighborhood three times a week with the assistance of walker, purchased a stationary leg and arm bike that he uses daily to exercise in his home, and uses four pound weights for leg raises while sitting in a chair.

He’s also cooking most of his own food now. The MOVE! program taught him how to broil chicken and fish and to substitute spaghetti squash for noodles when he’s having a pasta craving.

“I used to not like drinking water, but now I’m up to seven glasses per day,” said Moody. “I add watermelon and pineapple flavorings to the water, but they don’t have any calories. I have to keep a count of my calories every day and I write it down.”

Both Moody’s blood pressure and pain have improved as his weight has dropped.

“My two daughters are very proud of me,” he said. “I met with both my daughters over Christmas and they could tell the difference. They call to check on me and they keep me motivated too.”

Both Veterans plan to continue attending MOVE! meetings once they reach their goal weight to not only stay inspired themselves, but to also help other Veterans get started, remain focused and achieve their goals.

Veterans interested in joining MOVE! should speak with their primary care provider about options available to them at their local facility. Find additional information on the web at www.move.va.gov.