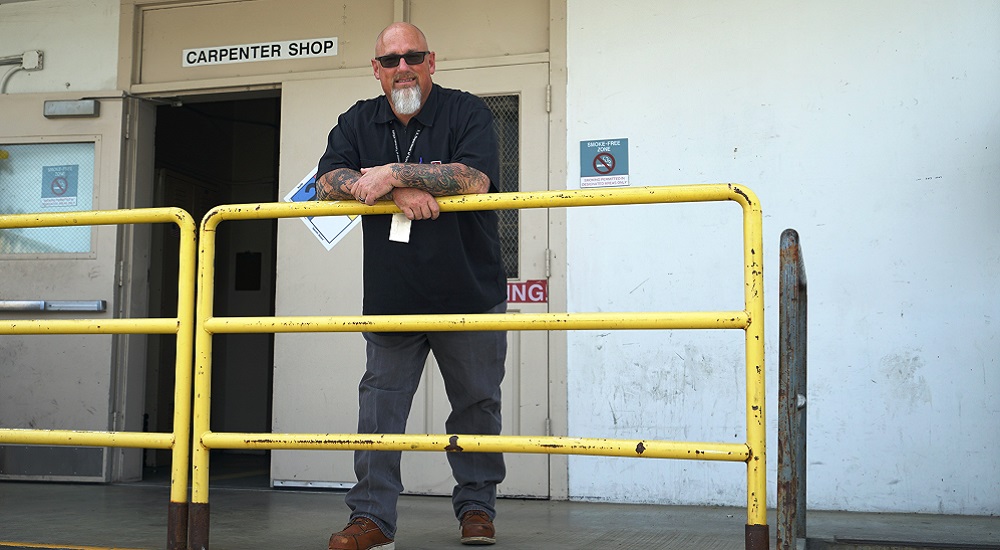 Across from Craig Robbins’ desk in his large office in the VA Palo Alto carpentry building is a picture of his daughter at her eighth grade graduation. For Robbins, pictured above, that photo is more than office décor, it’s a reminder of what pushed him to change his life for the better years ago.

“My biggest priority was being a better father and making sure my daughter is raised the right way,” Robbins said, explaining why he worked so hard to turn his life around from where it was a decade ago.

Robbins served in the Army from 1989 to 1993 and had trouble adapting back to civilian life once he got out. As he explained, he fell in with the wrong crowd and started doing and dealing drugs, which eventually led to his arrest in 2006. At that point, a SWAT team raided his home. His daughter, then just four years old, was taken into protective custody.

“That was a real low point for me,” Robbins remembered. From there, he was sent to jail for 45 days and when he got out, his daughter was in the care of Child Protective Services (CPS).

Regaining custody of her became his top priority and he was able to work out an agreement to make that happen, provided he entered a sobriety program and stayed clean.

“The first thing I needed to do was leave the county of San Francisco,” where he grew up, he said. “I got wrapped up in a certain lifestyle and had to get out.”

Robbins had looked into the VA’s Homeless Veterans Rehabilitation Program (HVRP) and wanted to enter, but since he was not clean and sober at that point he first went into the former homeless shelter on the Menlo Park campus (which most knew as Irvin’s Shelter) to regain sobriety.

When he eventually landed at HVRP, he worked out an agreement under which CPS would bring his daughter to visit him while in the program, providing a constant reminder of what he was working toward.

Drive and commitment to turn his life around

After graduating HVRP, Robbins went into Haven House, where he was eventually able to have his daughter stay with him while he proved he was able to live a clean life and care for her.

During this time he also focused on saving money for his and his daughter’s future. While working an apprenticeship as a journeyman plumber, he connected with VA’s Compensated Work Therapy (CWT) program, where he worked step-by-step with his case manager, Ron Robinson.

“He was probably one of the most ultimate professionals I’ve met,” said Robinson, who spoke highly of Robbins’ drive and commitment to turning his life around. “He wasn’t scared of hard work.”

With the eventual goal of landing a permanent VA position in mind, Robbins submitted VA applications while working other jobs, including installing fiber optics for AT&T and working with a general contractor to harvest methane gas out of landfills.

“He decided he wasn’t going to just wait for the VA to call him,” Robinson said, complimenting Robbins on doing whatever it took to reach his goals. “He went out in the community to find work because that’s what he had to do.”

While he was getting steady work, Robbins explained that part of properly caring for his daughter and her future meant needing stability and these contract jobs did not provide that.

“The world of the trades is very cutthroat,” he said. “There’s not a ton of job security there and I had to think of raising a little girl. Plus I’m a veteran and I like helping other veterans.”

Part of what kept Robbins fighting for his future was the fact that if he relapsed at all he would be sent back to prison. “Relapsing was off the table,” he said. “I made sure I was following the rules to a ‘T.’”

A lot of patience and persistence

In all, it took about two years for Robbins to land the permanent VA position he had been coveting. He recalled that it took a lot of patience and persistence to finally get that offer in 2009.

“A lot of Veterans think ‘I should automatically get in because I did all this work,’” he said. “But that’s not always the real world.”

Now the Chief of Maintenance and Repair for Engineering Services, Robbins has had full custody of his daughter since she was five years old, bought a house on the peninsula and got married just over three years ago – a dramatic turnaround from 2006.

Expressing appreciation for what the VA programs, including CWT, helped him accomplish, Robbins said that the boost in self-esteem they provided was a crucial part of changing the course of his life.

“The program helped me take pride in myself,” he said, adding that Veterans in similar situations to the one he was in need to be persistent and know that there are programs that can help them through it. “If you really want to change, it’ll happen. If you come across stumbling blocks, you need to seek help. Don’t ever quit.”

His former case manager Robinson echoed that sentiment and remarked that Robbins’ commitment to the program and his goals made him “one of the superstars” that he worked with. “To do what he’s done – he’s one of the true success stories.”

Since 2013, Kameela Din has been the technical writer and editor for the Compensated Work Therapy Program at the VA Palo Alto Healthcare System, where she has been able to hear and share the stories of many remarkable Veterans. She previously worked as a freelance journalist.