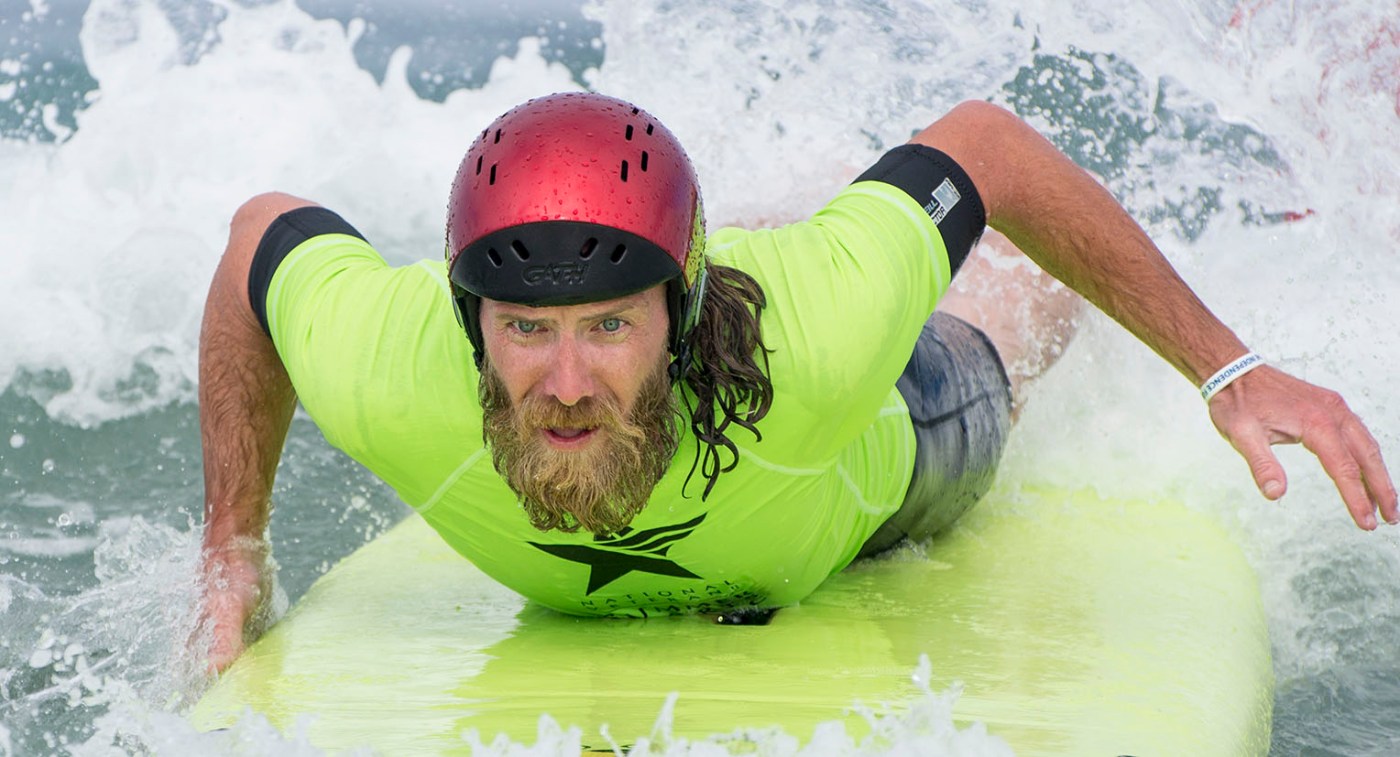 The first day at the National Veterans Summer Sports Clinic came with the promise of a beautiful morning on the beaches of La Jolla Shores where Veterans from across the nation gathered to face the waves head on.

Team Vulcan, comprised of seven Veterans from VA Salt Lake City Health Care System is one of ten teams to participate at the clinic in San Diego, Sept. 16-21.

The Veterans started their journey on the shore where a team of local volunteers gathered to teach them the basics of surfing.

Team Vulcan is led by their coach, William Klinger, a substance abuse recreation therapist with VA. Klinger, also affectionately known by the Veterans as “Dr. K,” has been participating as a coach at the clinic for several years.

“I’m a little biased,” Klinger said. “I think this is the most amazing program VA has going on. What we try to do in recovery is help people find a new life, an active life in a safe, sober and supportive environment.  The Summer Sports Clinic is just that – a recipe for success.”

Klinger said one of the foundations of recovery for Veterans is camaraderie in a positive and supportive group. In fact, many of the Veterans he works with have gone on to become peer support specialists, a job focused on mentoring Veterans like themselves.

“The National Veterans Summer Sports Clinic is a program that grows. It’s the magic of the volunteers, the sponsors, the therapists. It’s just incredible. I think this is how life should be,” he said.

Marine Corps Veteran Spencer Bolingbroke is one of the Veterans Klinger is coaching on Team Vulcan.  But before Spencer found his way to the clinic, he says he struggled with substance abuse for many years after self-medicating to cope with symptoms related to post-traumatic stress.

Marine Corps Veteran Spencer Bolingbroke is all smiles while surfing at the National Veterans Summer Sports Clinic. Bolingbroke is one of nearly 100 Veterans to participate in the 2018 national rehabilitation clinic.

Spencer joined the Marines in 2004, and after eight months went on his first combat deployment to Fallujah, Iraq.  He later suffered an injury and had to be medically discharged. After he was discharged, he realized he hadn’t fully recovered from the mental wounds of living in a war zone.

His addiction started with prescription pain medication, but soon progressed.

Back home, he says he felt he couldn’t open up to friends and family. Instead, he lied about his experiences because he felt others couldn’t relate or understand.

He eventually hit rock bottom and was arrested. The judge offered him a treatment and recovery program in lieu of jail time. He accepted.

It was then Spencer started on his path to sobriety. He was introduced to the recovery program with Klinger where he finally accepted and wanted help with his PTSD and addiction. The program brought him together with other Veterans again, and Spencer says he finally started to accept himself and feel pride in his service. It was this pride as a Veteran that led to him wanting to get his life back.  He started working with Klinger and enjoying things again.

“One of the best things to staying sober was being active, being out doing things with other Veterans,” said Spencer.

He describes the love and support of the volunteers and staff at the Summer Sports Clinic as “incredible.”  But he said it’s still hard to accept the praise because he hadn’t always felt worthy of it. Being at the clinic helps him feel differently.

“You have to ask for help.  As Veterans, there is this mentality where we feel like we have to do this alone.  But not once in the military are we taught you have to do anything by yourself.  You always have a battle-buddy, and you always train with other people. That’s what you have to realize, you can’t do this alone.  Someone is always there to help,” Spencer said.

Today, he has three other Veterans he is sponsoring through a 12-step addiction recovery program. Part of his personal recovery has been helping other Veterans go from hating life like he had, to seeing their lives change and having a life worth living.

“It’s kind of a selfish program because by helping them, I am helping myself. The only way to keep it, is to give it away.”

Sarah Jane Phillips is a public affairs specialist at the Northeast Ohio VA Healthcare System.  She is a graduate of the Defense Information School Public Affairs course and specializes in marketing and design.  She lives on a small farm in a historic village outside of Cleveland, is a naturalist and enjoys boating and hiking with her dogs.