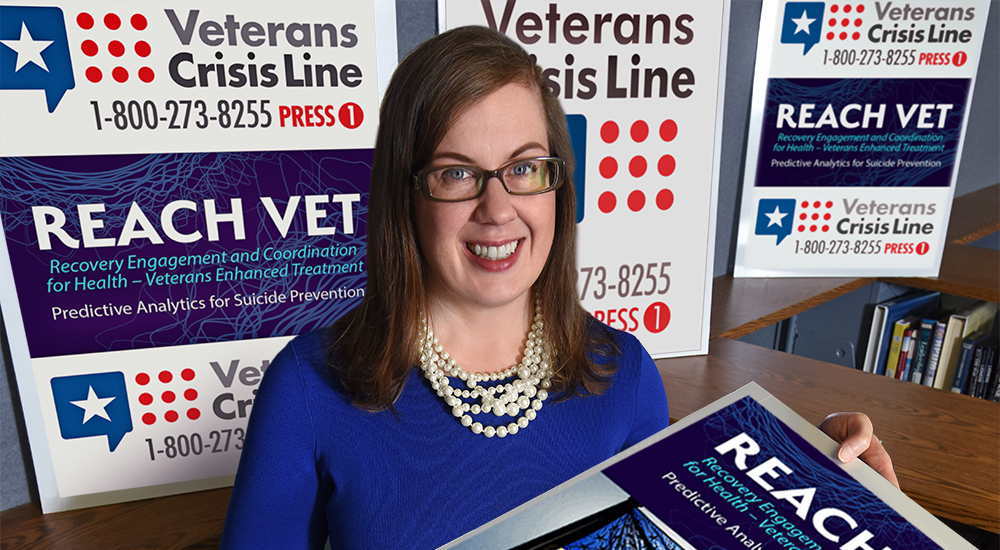 Devising ways to prevent Veteran suicides is front and center on the minds of VA officials. An average of 20 Veterans a day are taking their own lives, a rate that has been holding steady in recent years. Studies have shown that former service members are more likely than non-Veterans to commit suicide.

One of VA’s prevention efforts is an outreach program aimed at predicting who may be at highest risk for suicide and intervening before a suicide occurs.

The program is REACH VET, or Recovery Engagement and Coordination for Health – Veterans Enhanced Treatment. It uses predictive modeling and medical record data to identify Veterans at highest risk for suicide. The model includes such variables as demographics, use of VA services, and medications. Once a Veteran is identified, his or her VA mental health specialist or clinician checks on the Veteran’s well-being and reviews that a person’s treatment plan to determine if enhanced care is needed.

Dr. Sara Landes, a clinical psychologist at the Central Arkansas Veterans Healthcare System, (pictured above) is leading a study to examine the implementation of REACH VET. The program, launched in April 2017, is now in use at all VA medical centers. It’s run by VA’s Office of Mental Health and Suicide Prevention (OMHSP).

“VA has long been a leader in suicide prevention efforts,” Landes says. “REACH VET represents an innovative program to identify Veterans at risk for negative outcomes. It allows providers to re-evaluate or re-engage Vets in care to address their needs.”

Program is acceptable and feasible

Landes is focusing on the implementation of REACH VET at 28 VA sites. She says preliminary findings about the impact of REACH VET on Veteran outcomes are “promising but not definitive.” In its first year, the program identified 30,000 Veterans who are at risk for suicide.

“Early reports from the field demonstrated positive feedback from Veterans,” says Landes, who is also an assistant professor at the University of Arkansas. “We have initial data to support that the program is acceptable and feasible.”

REACH VET is producing information that will inform VA facilities of their patients who are in the top 0.1 percent tier of suicide risk. Early results show the program is having a positive impact on Veterans: more health and mental health care appointments; declines in missed appointments; fewer inpatient mental health admissions; and lower all-cause mortality.

“REACH VET is not about trying to find the Veteran who is in crisis at that moment,” says Aaron Eagan, VA’s deputy director for innovation – suicide prevention. “REACH VET is about identifying a Veteran who has risk factors, so we can help that person before he or she reaches the crisis point.”