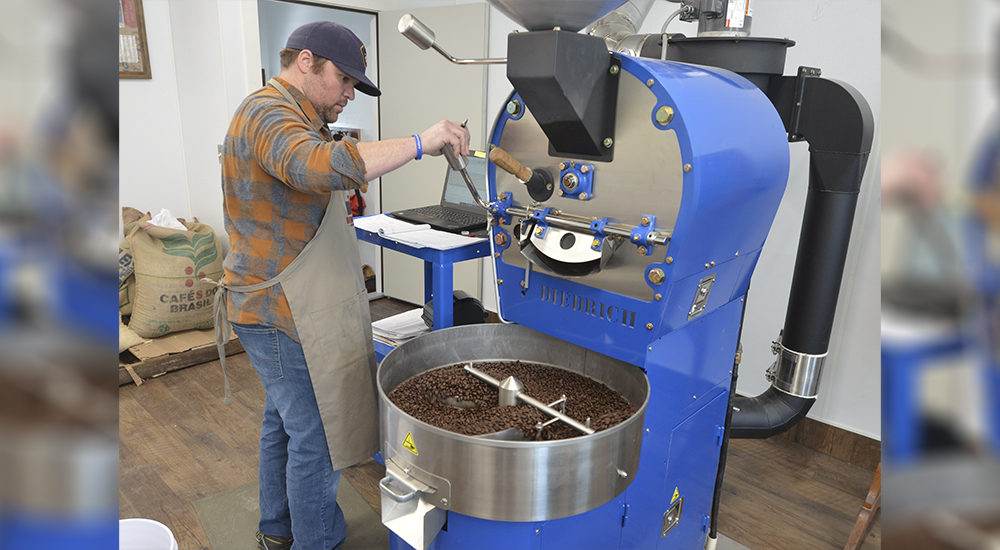 Sam Floyd (pictured above) believes much can be accomplished with conversation over a cup of coffee.

The Marine Veteran who served in Afghanistan is making his philosophy a reality with Operation Coffee, where 10 percent of every sale goes toward Veterans’ suicide prevention.

Motivated to try and make a difference following the suicide of a Veteran friend, Floyd bought a church built in 1866 in his hometown of Campbellsport, Wisconsin, about 50 miles north of Milwaukee.

He now operates his small-batch roasting operation out of the former First Baptist Church, which also has become his home, complete with a bell that still rings when the rope is pulled and a bedroom upstairs in the former choir loft.

“He believes that sitting down and having conversations helps.”

“Countless number of friends, and you hear about friend’s friends that committed suicide. I was basically sick and tired of it,” said Floyd. “So, now when I’m having a conversation over a cup of coffee with a Veteran, I always think — if I just could have had a cup of coffee with that guy, maybe he wouldn’t have decided to do it.”

Despite several signs that something was not right, Floyd said it took about a decade after he got out of the Marines to start receiving treatment at the Phoenix VA at the urging of his ex-wife.

“I was just not really understanding what I was going through in my head,” said Floyd, who deployed to Afghanistan in 2003-04. “I would sleep for a week and a half and thought that was normal. I’ll just get over it, that type of deal.”

“The whole post-traumatic stress, whatever you want to call it, depression, was undiagnosed for a little over 10 years,” he said. “Got married, and you can’t really hide anything from your wife. But she was a huge blessing because she helped me realize what I was struggling with. So, I went to the VA, got help.”

Floyd moved to Campbellsport and got a job at the Blue Door Coffee Co., a coffee shop on Main Street in the town of about 2,000 people.

Floyd converted the First Baptist Church, built in 1866, into his coffee roasting operation and his home.

He currently roasts two days a week, while still working at Blue Door. Each of his signature roasts bears a Veterans story on the back label of the package.

On the Honduras Dark Whole Bean bag, the story is written by retired Marine Maj. Mark Voelker, who describes being served a cup of coffee by a friend in Al Asad, Iraq, in 2004, while recovering from a helicopter crash.

“There is a much more to this than a cup of coffee,” Voelker wrote. “This is a process, a gift — a gift of time and, ultimately, empathy and compassion.”

“The reason I chose coffee is because there can be that common ground, just that one common thing, and that can be a cup of coffee,” said Floyd, who still receives care at the Milwaukee VA.

“His hope is to create that awareness. Everybody knows there’s a problem. He just wants people to talk about it. He just believes that sitting down and talking, having conversations helps.”