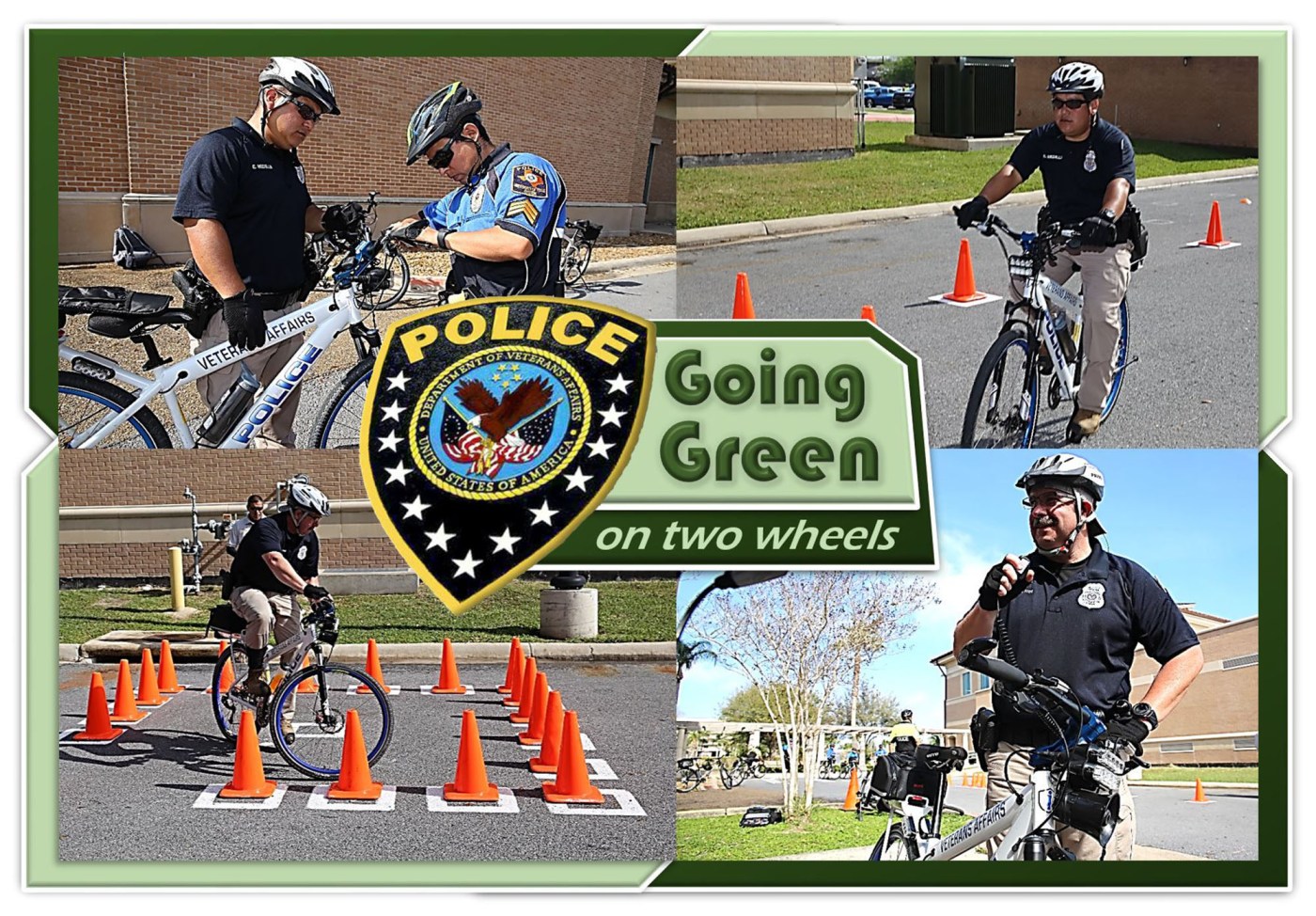 Police officers at VA Texas Valley Coastal Bend Health Care System (VCB) are going green, but they are not joining the Army although some have served their country as soldiers.

No, “going green” for the VA police has come to mean more like going on two wheels because that is exactly how two officers have started to conduct patrols.

“The facilities in our health care system have the advantage of occupying relatively small properties and their location in the southern Texas provides them with an annual average of about 10 months of favorable weather and conditions for safe bicycle riding,” said Maj. Gabriel Lopez, VCB Police Department operations officer. “Those two facts make it a luxury when you compare VCB to larger VA health care systems like Bob Stump VA Medical Center in Arizona, which is regarded as the largest Veterans health care facility in the nation. Using bicycles to do our patrols is our way of taking advantage of that luxury.”

According to Lopez, the bicycle patrols are a permanent addition to the police department. The department currently has a total of three 24-speed mountain bikes, equipped with front-shock absorption system, hybrid tires for easier handling around smooth surfaces like paved roads or rugged mountain trails. The price tags for the bikes range between $1,500 to approximately $2,000 (fully equipped).

“Thanks to the instruction provided by Sgt. Homar Bahena and Officer Joe Hernandez from the UTRGV Police Department we are confident that our new bicycle patrol now possesses the foundation necessary to safely and effectively operate the bicycles in order to accomplish their mission as bicycle patrolman,” added the major.

“The bikes will help our police department keep with the ‘Fit to Fight’ mentality many of our police officers learned during their time in the military because it will allow them to exercise while they do their patrols. The bike patrols will also help us conserve fuel, which in turn will help extend the life of our motorized vehicles, save money, and help the environment by lowering carbon emissions which create air pollution.”

The idea to conduct patrols on bikes was not received with open arms by everyone at the department, but that soon quickly changed as the pedals began to turn.

“At first, I was hesitant about the idea, especially the part about wearing something other than my regular uniform, but I quickly changed my mind after riding around and experienced how comfortable these new (bike patrol) uniforms are especially with the hot weather we get here in south Texas,” said VA Police Officer Erick Medellin.

“The handling on the bikes is smooth and we can maneuver around areas where a regular patrol car would not be able to travel,” added Larry Rigg, who along with Medellin where the first two VA police officers in VCB’s history to complete certification for International Police Mountain Bike Association’s course on Feb. 15.

“I think the bicycle patrol is a brilliant addition to our department,” said VCB Police Chief Terry Wallace.

“This is a great example of how our VA supports the implementation of strategies that help accomplish the diverse mission in ways that are beneficial for both staff members like our police force and the communities we’ve sworn to protect and serve. The addition of bike patrol is a ‘win-win’ situation for the VA, American taxpayers, and the environment.”

Author’s note: Earth Day (non-government website) launched in 1970 as a grassroots effort that has grown into a massive, global celebration. It is considered to be one of the largest civic events in the world. Earth Day is celebrated simultaneously around the globe by people of all backgrounds, faiths and nationalities. More than a billion people participate in campaigns every year. To learn about other ways the VA has celebrated Earth Day or helped the environment click on the link provided below.