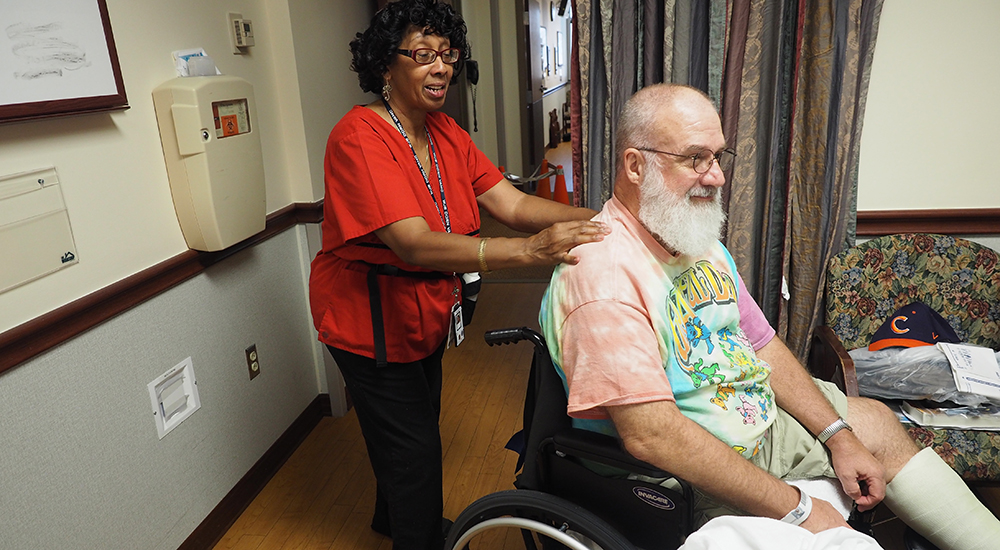 “That feels so good,” says Davis, a patient in the Community Living Center (CLC) of the Columbia VA Health Care System.

Smith, a U.S. Army Veteran, volunteers her hours at the Columbia VA Medical center. She is known as the massage therapist with the “healing hands.”

“It’s amazing what that sense of touch can do for a person. Especially when they don’t get to experience it much anymore,” Smith said.

One Veteran in the CLC, a diagnosed Alzheimer’s patient, kept his hands tightly clenched. As Smith began to massage his hands and wrists, the patient slowly began to release his fingers. Another Veteran seemed to be asleep in his wheelchair. As Smith massaged his shoulders, arms, and hands, the patient started to wake up and said that he thought he was dreaming about Smith’s touch.

Smith, a Desert Storm Veteran from Mount Vernon, New York, joined the military to travel and see the world. Eventually, she found a career path as a medic in nutritional care at West Point.

“Even though I am from New York, I had no clue about West Point or any other type of military posts or bases that were in my state,” Smith said. “Plus, not knowing a lot about the military before I enlisted made each assignment that I had a new experience for me.”

“This is the type of treatment that gets to the heart of a person” (Photo credit: Jennifer Scales)

After a varied post-military career, Smith decided to use the GI Bill to study massage therapy. By 2012, when she obtained her license, she knew she had found her calling.

“I love what I do,” Smith said. “This is the type of treatment that gets to the heart of the person. I can oftentimes feel the stiffness in their muscles when I begin my massage, and it is my goal to work it out.”

Carrie Jett, a Columbia VA recreation therapist, notes that Smith is the facility’s only volunteer massage therapist. “The patients really appreciate what she does, and the word is spreading,” said Jett. “Even those Veteran patients here who don’t participate in other therapeutic events eagerly await the day and time of Smith’s arrival to get a massage.”

When asked what makes her massages so special for Veterans, Smith replied, “I touch them with the spirit of love.”