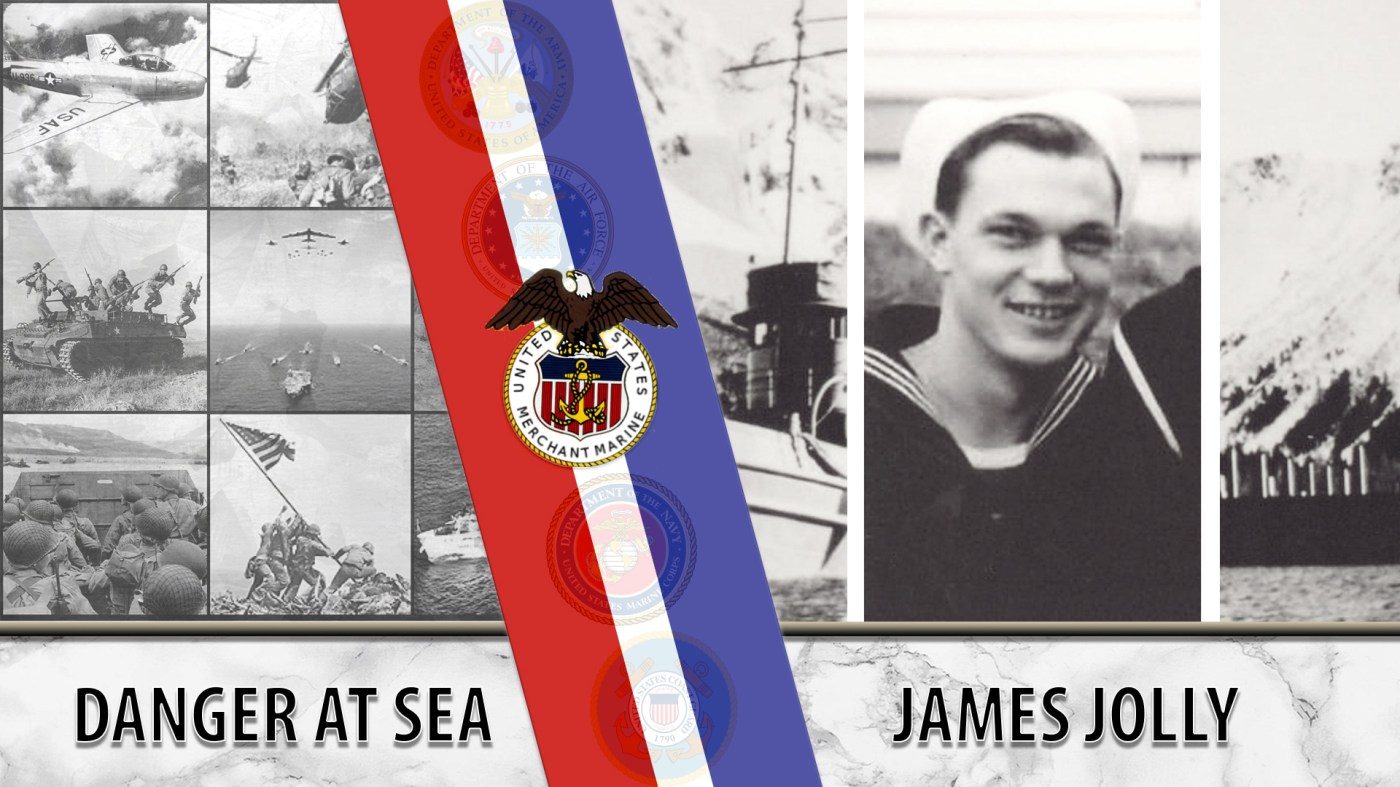 Night had fallen along the coast of Florida, where the silhouette of the Edmond J. Moran could be seen cautiously approaching the Miami shoreline. A Navy ship escorted the Moran, a seagoing tug, and the sunken British Antata in its tow. Aboard the tug was radio operator and Merchant Marine James Alvin Jolly who had been tasked with aiding the Moran in its recovery of the Antata’s valuable iron ore. As they came near the still-lit shore, a torpedo from an undetected German submarine hurtled past the Moran and struck the Antata. With no choice but to sever the tow line between the rapidly sinking ship, Jolly and his crewmates picked up the surviving crew and hurried towards Miami.

As a Merchant Marine serving in perilous waters, Jolly was no stranger to such encounters with the Germans in the maritime theater of World War II. He would ultimately serve for six years in the U.S. Maritime Service and attain the rank of ensign. Although his service would take him to the Atlantic, Pacific and the Andalusians, Jolly’s journey first began in California.

Jolly was born in Oceanside, Calif. in 1921. His interest in radio operation later led him to obtain an amateur radio license in high school. After completing one year at the College of the Pacific in Stockton, Jolly accepted a selection to the U.S. Maritime Service program seeking amateur radio operators. He soon departed for Gallops Island in Boston Harbor where he began training in seamanship, electronics and Morse code.

In December 1941, the ramifications of the attack on Pearl Harbor expedited Jolly’s graduation by three months. He then flew down to his first assignment in Key West, Fla., where he was to serve aboard the Edmond J. Moran tugboat. Its goal was to secure and tow back the cargo of torpedoed ships off the east coast.

The threat of German submarines, however, was ever-present. On an assignment in the Panama Canal, the Moran took part in the escort of two Navy troop ships. The convoy approached the Windward Channel, a location notorious for ambush. The command ship ran up its flags after spotting a German submarine. As if on cue, a conning tower suddenly surfaced to the immediate right of the Moran. Realizing its mistake, the submarine immediately submerged itself and struck the tug on its descent. Its attempts failed, as the Navy pursued it by sonar. When its oil slick came up, the troop ship dropped depth charges into the water and destroyed the submarine.

Next, Jolly and the Moran headed to the Pacific. This time, it towed two flat barges from Baltimore through the Panama Canal and up the coast of Mexico. Without being told of their ultimate destination, Jolly and his crewmates arrived in Seattle where they were each fitted with rifles and Alaskan weather gear. The Moran continued through the Inland Passage, approached Kodiak and finally reached the Aleutian Islands. Jolly took part in the Invasion of Kiska on May 11, 1943.

The Moran had arrived to the sight of the Idaho, Nevada and Pennsylvania battleships bombarding the shoreline. The tug served as a landing craft by having its two barges loaded with troops and mechanized guns. Once equipped with fully loaded barges, the Moran made for shore at full speed. Tractors disembarked from the barges and cut a path for the entourage of heavy machinery and mobilized guns that followed. In the meantime, the tug continued making trips despite being strafed by bullet fire from the shore. A few days into the trip, the Japanese dropped a bomb over the Moran. It landed in the water 500 feet away but had sent shrapnel flying everywhere. Jolly later received the Merchant Marine Combat Bar with his comrades.

After winter passed, Jolly returned to the states where he joined the crew of the Samuel W. Williston. Dangerously loaded with 50-gallon drums of aviation gasoline, the Williston departed from San Francisco. It would be 20 days before they were to pick up an escort coming up from Australia.

Making about 250 miles a day, the trip started off rather uneventful. At midnight on the seventh day, Jolly returned to his bunk after completing a procedural four-hour watch. Two hours later, a shock wave rippled throughout the Williston; the ship had seemed to have struck something. The captain immediately stopped the ship and put it in reverse, but they found nothing in the waters. Unhindered, the Williston continued on its 42-day trip and eventually pulled into port at Nouméa, New Caledonia. Having burned significant amounts of oil, the Williston sat 10 feet higher in the water. When Jolly, the captain, first mate and chief engineer boarded a mechanized lifeboat to report back at shore, they made a shocking discovery: a round indentation in the side of the engine room. In other words, a torpedo had struck the Williston on that seventh night but had failed to detonate, marking yet another near-fatal encounter with the Germans.

At the end of the war, Jolly served aboard the Young America, a ship that brought American troops back from Japan and South Korea. After six years spent in perilous waters, he soon left the Merchant Marines and returned home to his young bride. He later decided to go back to school in Stockton and graduated with a degree in physics. He would eventually receive both a master’s degree and a doctorate and go on to work at the Naval Postgraduate School for seven years. Due to his strong background in engineering, management and industry, Jolly was offered a position in the College of Business at California State University, Sacramento. He retired after 14 years.

Thank you for your service, James Alvin Jolly!