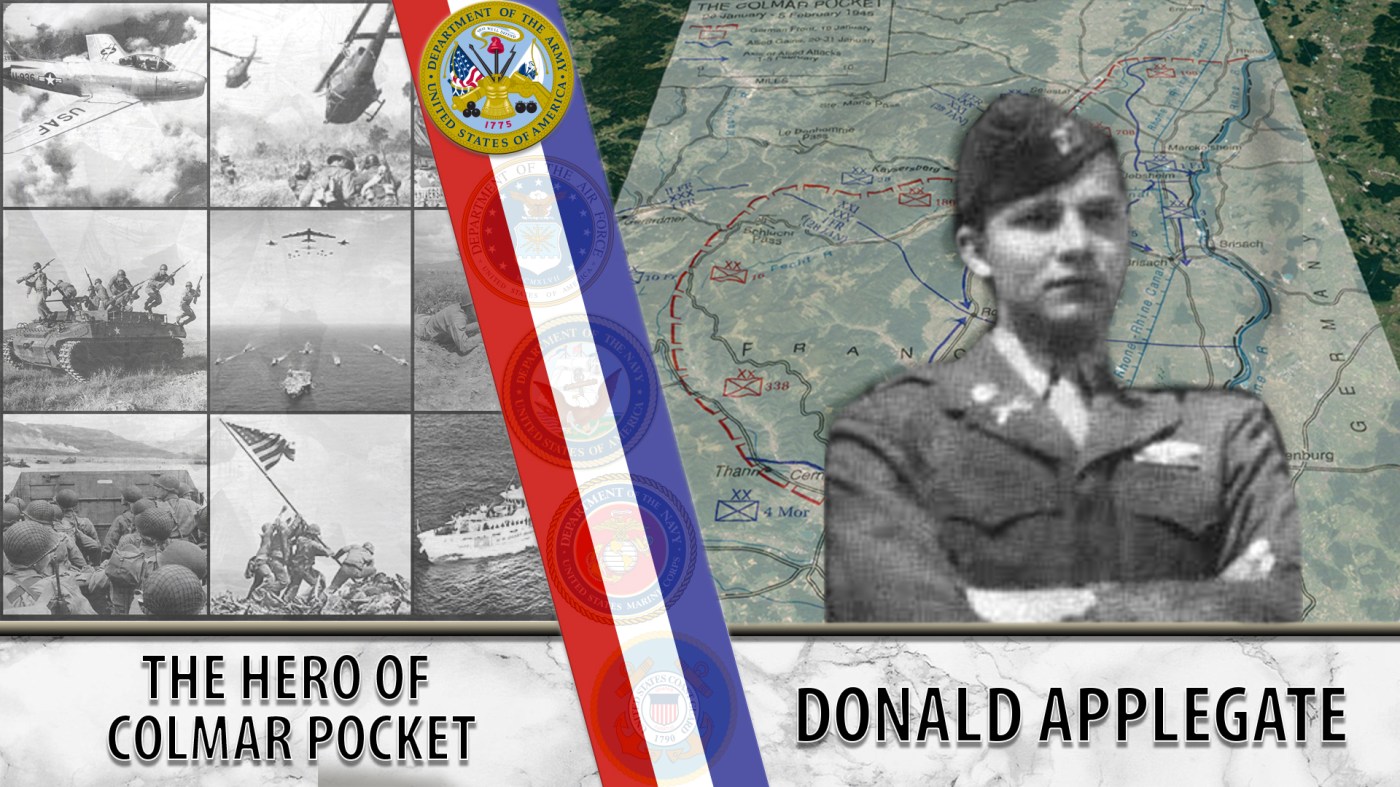 World War II Veteran Donald W. Applegate is the recipient of both the Distinguished Service Cross and the Silver Star for his actions in the European theater

Donald W. Applegate of the U.S. Army received not only the Silver Star for his gallantry during World War II but also the Distinguished Service Cross—the second-highest military decoration that can be awarded to a member of the Army for extraordinary heroism.

Applegate served with the U.S. Army in the tumultuous European theater for four years, during which he engaged in the Battle of the Bulge, Battle of Colmar Pocket and Battle of Ruhr Pocket. His journey, however, first began in Ohio when he received the draft at the age of 19.

Applegate was born in February 1922, in Toledo, Ohio. He attended Monroe School and Robinson Junior High during his youth and graduated from Scott High School in June 1940. When the Japanese attacked Pearl Harbor in 1941, Applegate was a student at Miami University in Oxford, Ohio. In October 1942, he was drafted into the U.S. Army as a private assigned to the 81st Infantry at Camp Rucker, Alabama.

After completing basic training, Applegate went on to Officer Candidate School at Fort Benning, Georgia, despite his rank of private. He graduated as a second lieutenant and was assigned to Fort McClellan, Alabama, as an instructor. In 1944, he was assigned to the 75th Infantry Division at Camp Breckenridge, Kentucky, as the weapons platoon leader of K Company in the 289th Infantry Regiment.

In the fall of 1944, Applegate entered World War II by crossing into Holland and later joining the 3rd Army Combat Team in their mission to protect the city of Liège. On Dec. 16, the Germans launched a counteroffensive that sought to split the Allied lines and cut off British and American forces. A young lieutenant in the weapons platoon, Applegate soon took part in his first major confrontation in the Battle of the Bulge, the second deadliest campaign in American history.

Battle of the Bulge

On Dec. 21, six German Tiger tanks followed closely behind a captured American Sherman tank and ran through the American lines, killing or incapacitating every officer in Applegate’s company. The German advancement to Liège was ultimately stopped when a man of K Company immobilized the Sherman tank with a bazooka. Applegate became commander that night of a company reduced to 70 men, three rifles platoons, and one weapons platoon. He had his wounds treated at a field hospital and spent the Christmas season in below zero-degree temperatures.

The hero of Colmar Pocket

On Feb. 2, 1945, Applegate, now a captain, took part in the Battle of Colmar Pocket in an attack on a small town acting as the Germans’ escape route. When the German tanks arrived, however, he and his men found themselves pinned down in an open field. Although immobilized for a while, they prevailed with the aid of artillery fire.

After escaping, Applegate and his men went through town fighting house to house. When the Germans launched a massive counterattack, Applegate directed his unit to fall back to a reorganization point under the command of the executive officer. Meanwhile, he stayed behind with one platoon to cover their retreat. Blasting a hole in the rear wall of a building with a bazooka, he led his men out and contained the attack. The 9th U.S. Army headquarters awarded Applegate the Distinguished Service Cross for his service at Colmar Pocket.

After undergoing a shoulder operation to remove shrapnel, Applegate rejoined his unit across the Rhine River onto German soil to engage in the Battle of Ruhr Pocket. He then took part in a campaign in Heinrichenburg, which was situated in the industrial heart of Germany, while the Germans sought to protect the Ruhr Valley. On April 4, 1945, the Germans surrounded Applegate and his men and demanded their surrender.

Unhindered, Applegate’s unit requested assistance by radio and was given support in the form of crossfire. The Germans suffered immense casualties while Applegate braved the intense crossfire to lead his men personally. They captured three artillery pieces and more than 170 Axis prisoners. Applegate subsequently received the Silver Star for his service.

Following the war, Applegate stayed on to manage the liberation of several concentration camps on occupation duty. Later, he attended college at the American Institute of Foreign Trade at the National University of Mexico, where he studied International Relations and Foreign Trade. Applegate received a master’s degree in business. Early in his career, he worked in banking and international business with the National City Bank of New York. He later served as founder and president of Lucas Products Corporation when he purchased a struggling small business in Toledo.

Applegate is also the recipient of the Bronze Star Medal and two Purple Hearts. In 2011, then-President Barack Obama and Marcy Kaptur, Ohio Congresswomen, honored him for his distinguished service.

Applegate died in April 2012. The publication “What A Time It Was,” a collection of interviews of World War II Veterans, documents his story.