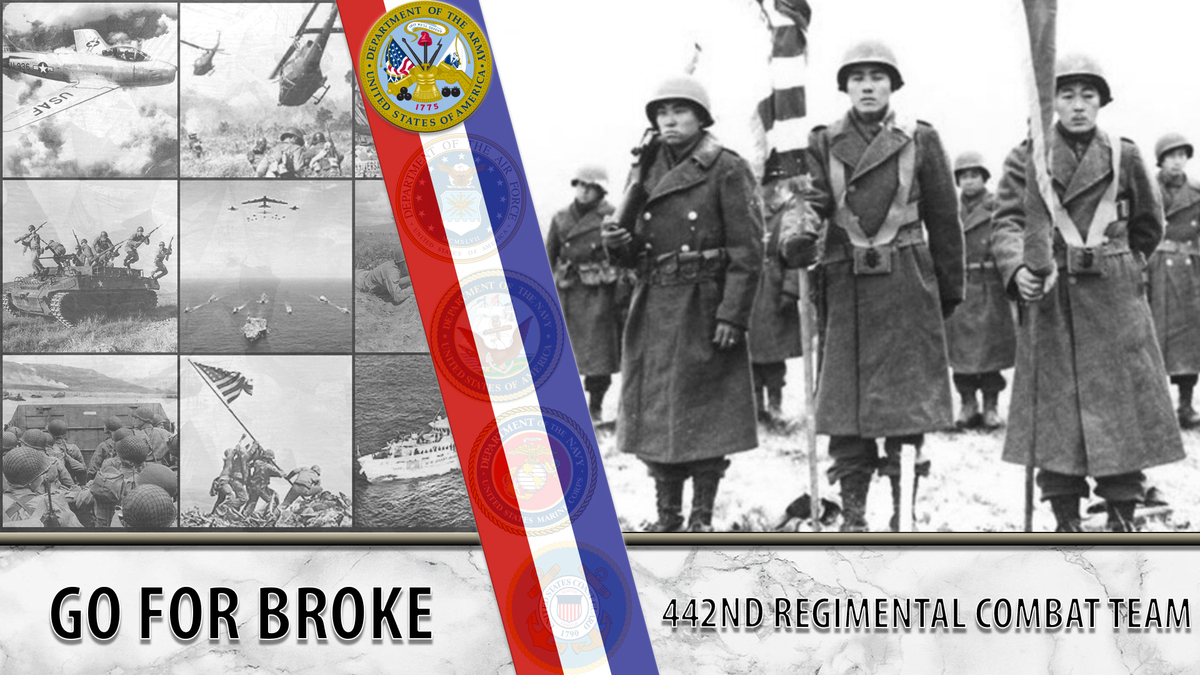 The 442nd Regimental Combat Team, composed almost entirely of second-generation American soldiers of Japanese ancestry, was known as “Go for Broke.” Going for broke is thought to be a Hawaiian gambling slang that means to risk everything for a big win.

During World War II, after the attack on Pearl Harbor, the men of the 442nd Regimental Combat Team distinguished themselves with honor.

The formation of the 442nd came at a time of rampant xenophobia and suspicion, when Japanese-American citizens were rounded up and sent to internment camps across the United States. Though America was also at war against Germany and Italy in Europe, President Roosevelt’s executive order to detain and intern citizens affected only those of Japanese descent.

The team began as two separate units: the 100th Infantry Battalion and the 442nd Regimental Combat Team. The 100th was comprised of mostly Japanese-Americans from Hawaii who were also members of the Hawaii Army National Guard and were once members of the Hawaii Territorial Guard. The Territorial Guard was disbanded, only to have it reformed the next day, minus the Japanese-American members. They were considered “enemy aliens” and were not allowed to enlist.

But the former members of the 100th, who had been part of the University of Hawaii’s Reserve Officers’ Training Corps, didn’t sit around idly while their country was under attack. Leaving behind school, the men volunteered to do menial labor to help support the Army. They called themselves the Varsity Victory Volunteers.

Those members of the former 100th were re-formed and sent off to training, eventually reaching Camp Shelby, Miss., where they were stationed with the 442nd Regimental Combat Team.

The 442nd did not have as strong a volunteer turnout; most of them came from the mainland where they were facing much worse treatment than those from Hawaii. According to the Go for Broke National Education Center, the two units butted heads. The 442nd believed the 100th was “impulsive and crude,” and the 100th thought the 442nd was too “sullen and unfriendly.”

This all changed when the 100th visited one of the internment camps. They hadn’t realized what their comrades were going through and why the 442nd treated everything so seriously until the 100th saw it for themselves. After that, there was less conflict between the two units. It wasn’t until both units were in Italy and the 442nd regiment needed to replace a battalion that it was reorganized to include the 100th within the 442nd.

After making a name for themselves in Italy, the 442nd was sent to France to supplement the fight against the Germans in the Vosges Mountains.

In October, 1944, the 141st Regiment of the 36th Infantry “Texas” Division found itself in a tough spot. They were surrounded by the enemy and running low on food, and two previous rescue attempts failed. The 442nd fought for five days and rescued the Texans, but lost more men than they rescued.

During the rescue, the 442nd freed the towns of Bruyères, Belmont, and Biffontaine in France after 10 days of fighting. To this day, the people of those towns honor the 442nd, and have erected monuments, named streets, and even built museums in remembrance of them.

By April 1945, the 5th Army moved the 442nd to Italy to break the Gothic Line, a German defensive in the Italian Campaign, which was the last obstacle that kept Allied troops from pushing forward. The unit marched Mount Folgorito at night. When it broke the German defense, Allied troops forced the German army to finally surrender on May 2, 1945.

According to the Go for Broke National Education Center, the total number of service members in the 442nd Combat Team was about 18,000. This group ultimately received 9,486 Purple Hearts, 21 Medals of Honor and seven Presidential Unit Citations.

We honor their heroic service.