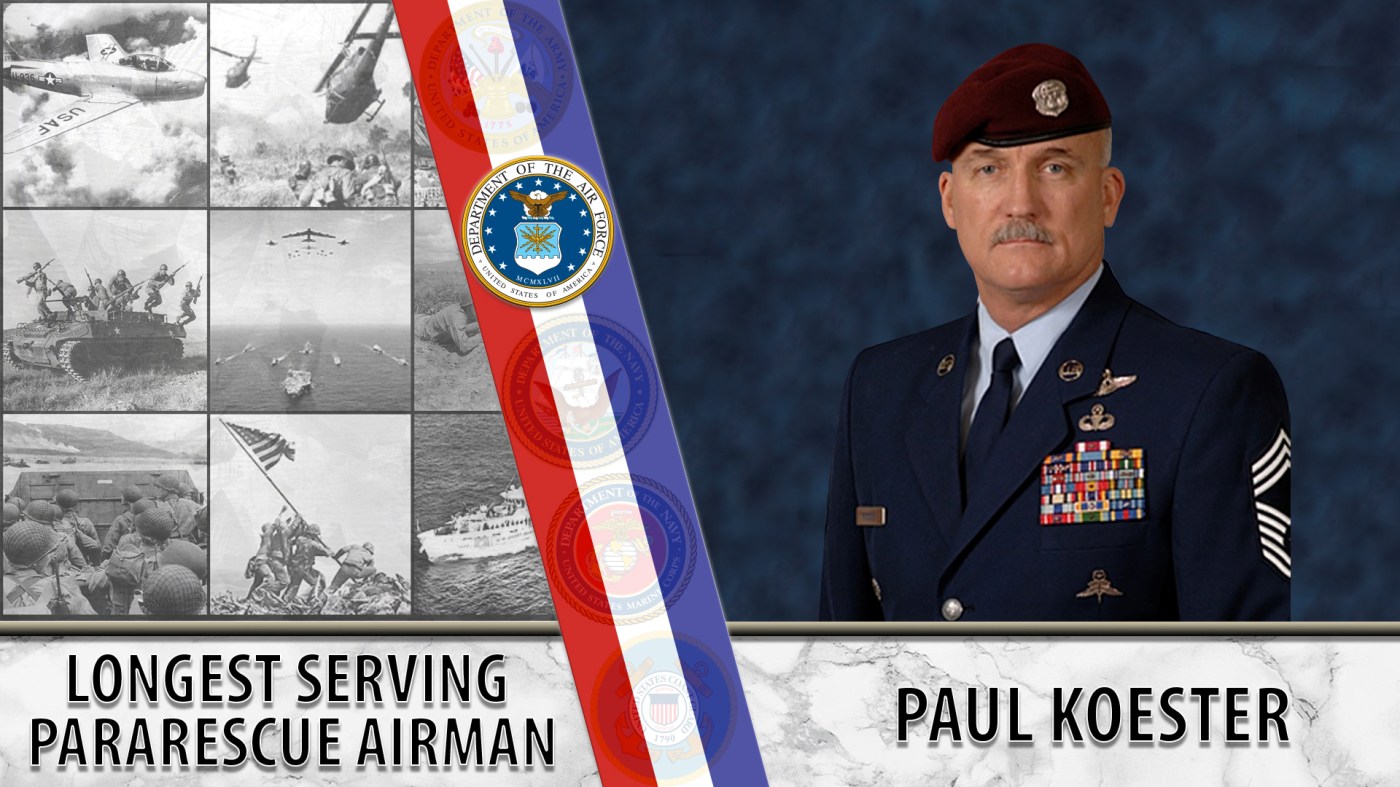 Paul Koester retired from the Air Force in 2015 after 41 years of service, the longest-serving pararescue airman in history.

In 2015, Paul Koester retired from the Air Force after 41 years of service. Koester ended his career as the chief enlisted manager for the 58th Rescue Squadron in Nevada and gained recognition as the longest-serving pararescue Airman in history.

Koester enlisted in the Air Force in 1974 during the Vietnam War. He wanted to be a jet engine mechanic. However, while Koester was in basic training, pararescue Airmen asked if he wanted to join their career field. Although he barely passed the physical training tests, he completed his training.

Koester went to Elmendorf Air Force Base, Alaska, with the 71st Aerospace Rescue and Recovery Squadron. He saved over 75 lives while serving over four years. Koester then spent six years stationed at McClellan Air Force Base before meeting his wife, Stacey.

From 1987 to 2003, Koester went to the Francis S. Gabreski Air National Guard Base in New York, where he was a part of the 102nd Rescue Squadron. He deployed numerous times between 1997 and 2002 in support of Operation Enduring Freedom, Operation Northern Watch and Operation Southern Watch.

After the Sept. 11 terrorist attacks, Koester and his team sorted through the rubble to find people who survived the collapse of the World Trade Center. On the day of the attack, Koester and his team pulled out the last survivor. Three weeks later, Koester deployed to the Kuwait/Iraq border. After Koester came home from his deployment, he decided to return to active duty with the 58th Rescue Squadron.

Throughout his career in the Air Force, Koester became a master parachutist with over 1,000 jumps, a Naval Surface Warfare Center/CRANE Joint Small Arms and Sniper Rifle Certified Armorer as well as a designated marksman instructor. Koester holds a bachelor’s degree in aeronautical studies and a master’s degree in both aeronautical science and engineering management.

He now resides in Nevada, where he skydives, conducts firearm training for military members and instructs tactical marksmanship courses in his free time.