Veteran guides others with PTSD to avoid suicidal thoughts 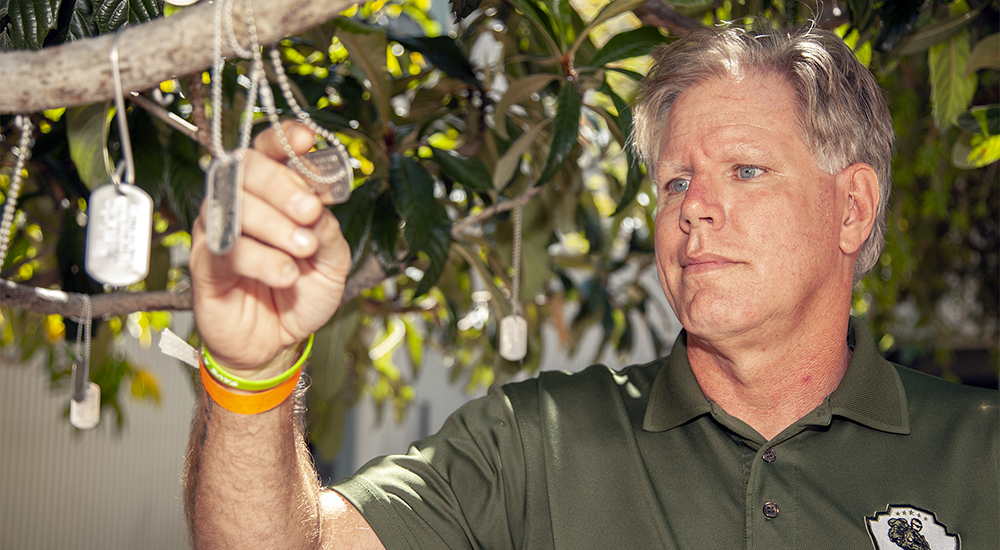 These days, Jeff Henson is doing what he believes has been his calling in life. He’s showing people who have attempted or have had thoughts of suicide that there is another way.

The Air Force Veteran (pictured above) is a volunteer at Save A Warrior. The nonprofit provides counseling in mental health, wellness and suicide prevention to Veterans, active-duty military and first responders. More than 1,100 men and women have gone through the program since it began eight years ago.

Many of these people, Henson explains, are missing “their family, their tribe” with whom they once built a friendship and camaraderie in the military or elsewhere. A lot of them not only have PTSD, he says, but PTSD and moral injury, which is essentially a conflict with one’s personal code of morality.

A Veteran may feel guilt, shame or self-condemnation for violating his or her moral beliefs in combat by killing someone, witnessing death or failing to prevent the immoral acts of others.

The will to live

Henson believes moral injury is a form of “complex PTSD” that can also stem from negative circumstances in one’s childhood.

“We introduce a Veteran to a tribe of 12 other Veterans who came to Save A Warrior at the same time as total strangers. They can leave as ‘brothers’ with an understanding that it’s not always what happened down-range that has them stuck in life. We provide hope and magic that is the will to live.”

Henson has been there himself. Diagnosed with PTSD and void of hope, he went through the Save A Warrior program in 2016 while in Veterans’ treatment court in Orange County, California.

Flashbacks from the Gulf War

His court time stemmed from a domestic violence incident in 2013. At the time, he was experiencing many of the classic PTSD symptoms: nightmares, mood swings, anxiety, depression, isolation and flashbacks. When the incident happened, he had flashed back to a moment when he unintentionally witnessed a decapitation in the Saudi capital, Riyadh, during the Gulf War in 1990, and he lost control.

Earlier this year, a VA study in the Journal of Traumatic Stress found that Veterans with PTSD — compared to those without — are more likely to have justice involvement.

The researchers say it is unclear what is driving the ties between PTSD and criminal justice involvement. They say the general strain theory may partially explain the results. That theory asserts that the risk of criminal behavior is higher among people who have experienced traumatic events and report negative effects, such as high levels of anger or irritability,

It gave me hope

Meanwhile, as part of getting his life back together, the 59-year-old Henson is pursuing a doctorate in psychology at the California Institute of Integral Studies.

He’s also trying to give back to the organization that gave him so much.

“Save A Warrior did not save my life, but it gave me hope,” he says. “It’s the difference between `being alive’ and `living.’ It’s also about being of service. I’m one of the shepherds who helps people through the process that I went through.