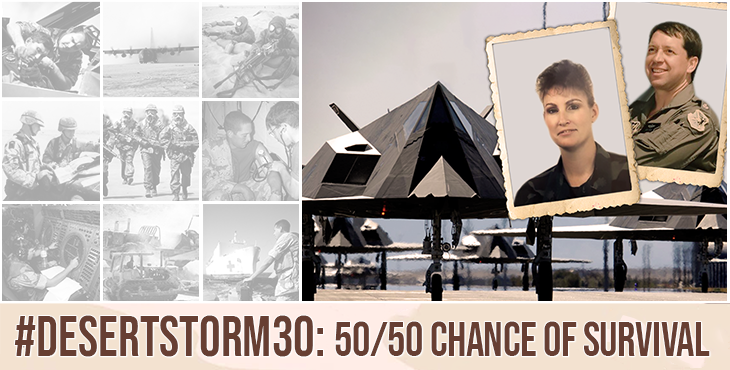 Pilots spent months planning operations, developing routes and making target lists during Operation Desert Shield. During that planning, the numbers were grim. For the 12 F-117s that left Jan. 16, commanders said six might not return.

Most spouses didn’t know when the Desert Storm air war started and watched TV coverage from the states. Bridget McGovern – Feest’s wife and herself an Air Force Veteran – knew hours before. She watched from a command center at their base in Saudi Arabia.

“We were told we would lose 50% of them, and that we needed to be mentally prepared for that,” she said.

An F-117A stealth fighter aircraft of the 37th Tactical Fighter Wing sits on the taxiway while the pilot waits for clearance to takeoff for the flight home after Operation Desert Storm.

When Feest and McGovern received deployment notification in early August, they both said they expected to be gone less than 30 days. Stationed at Tonopah Test Range in Nevada, the F-117 program had just came out of the “black” world as a classified program. At the time, they owned a house in Las Vegas. McGovern gave her checkbook, a set of keys and a list of anticipated bills to a fellow military officer and asked her to oversee the house payments. Thirty days became almost a year-long task.

President George H.W. Bush ordered U.S. forces to the region in August 1990. Feest and McGovern deployed to King Khalid Air Base in Khamis Mushayt, Saudi Arabia. The base sits in the southwestern portion of Saudi Arabia, less than 100 miles from the Yemen border. They were part of a more than 300-person unit deployment.

McGovern, a logistics officer, was on the first plane out from Tonopah, landing Aug. 18. As the deputy commander for resource management, she spent her first 30 days setting up food contracts, airfield billets, fuel deliveries, supply lines and dozens of other support measures. These efforts supported the bed down and support of the F-117 – support staff and pilots, including her husband. Saudi Arabia’s societal customs toward women sometimes made fulfilling her mission difficult, so she got creative. She sought to work with a Western-educated Saudi officer who was more cooperative because he understood her mission. When that didn’t work on some assignments, she relied on two of her male senior noncommissioned officers to serve as her representatives.

Feest flew from Tonopah to Langley Air Force Base, Virginia. They then flew with tankers from Langley to Saudi Arabia, landing Aug. 19.

After arriving, the pair went about their jobs. For Feest, that meant flying proposed routes, joining tankers and planning for missions. For McGovern, she was knee deep in building infrastructure for deployed troops. The two lived in separate locations at the airfield. They ate meals together when they could with one strict rule: no public displays of affection. Because no other military couples deployed from the stealth unit, neither wanted to distract service members from the mission.

On Jan. 16, the order came in: F-117s were to drop bombs during the opening wave of Operation Desert Storm. McGovern and a half dozen other commanders and intelligence officers were the first the wing commander notified, even before the pilots.

Following the briefing, the realization set in that her husband was about to fly into harm’s way – with a 50/50 chance he may not return.

“I remember going out into the hangar bay,” she said. “Of course, nobody in the whole wing knew they were going except those pilots. They were checking their sidearm and preparing their gear. I remember standing at a podium, watching them from across the hangar.”

While she watched, one of the NCOs she worked with stopped to talk.

“He said, ‘They’re going tonight, aren’t they ma’am?’ I asked, ‘What makes you say that?’ He said, “Your face is white as a sheet.’ I’ll never forget him saying that because I thought I was as cool as a cucumber. I guess I wasn’t.”

McGovern not only worried about her husband. She personally knew all Feest’s fellow pilots and their families.

“Obviously, my husband weighed heavy on my heart,” McGovern said. “But, I worried about all of them. I knew their wives. They were my girlfriends for years and years. I knew their children. I watched them grow up. There was a lot of emotion wrapped up in this.”

She also worried about the effect a loss would have on her husband.

“Oddly enough, in my head I believed it had to be a real errant bullet that got him,” she said. “I needed him to be okay. At the same time, I worried how he would feel, should any of his fellow pilots not return. He was leading this mission and the loss would be very personal regardless of the man involved.”

Feest said F-117 pilots had to drop their GBU-27s from under 10,000 feet. At that altitude, Iraqis had an increased chance of hitting one of the aircraft with anti-aircraft artillery, or AAA.

Additionally, stealth technology was largely unproven. Feest flew F-117 missions during Operation Just Cause in 1989, but Panamanians had limited defense. Desert Storm was the first true combat test for F-117s – and its pilots.

“Going out there the first night, seeing the AAA, I thought, there was no way I was going to make it through there without getting hit,” Feest said. “I had trained my entire career for this night and I just wanted to make sure I was successful in hitting my targets. I was always aware that something could happen, and I would not return. Once I made it out of the target area, I focused on making it home.”

While Feest flew his mission, McGovern waited, with other senior leaders in the command post, for word from the pilots.

“Many hours passed between the time the pilots left and their first opportunity to communicate with us again,” she said. “It was a tense time. A couple of the pilots from the mission planning cell came and grabbed a couple of us and asked if we wanted to watch the CNN narrative. I think they were just trying to distract us.”

In a small room with a couple of beat-up chairs and an old black-and-white TV, they tuned into CNN. They listened to various American broadcasters describe the bombs and the triple AAA.

“One pilot looked at the other and said, ‘What do you think?’ The second smirked back and said, ‘Time to start the countdown.’ I had no idea what these two crazy guys were up to but like clockwork our TV went dark at the bottom of the count. They were beside themselves with glee. One of them said, ‘The target has been hit.’ I felt like I was watching our guys do what they are so good at doing. We walked back to the command post together and my stomach started to tense up again.”

Pilots were on radio silence throughout their mission.  At a designated point within Saudi airspace, pilots brought up their radios and checked in with the command post.

“Unbeknownst to them, we were as silent and prayerful as we gathered behind the command post technicians,” McGovern said. “Suddenly, the silence broke with the crackling sound of a pilot declaring himself and announcing his call sign. My guy was on his way back to me. Everybody looked around and I smiled but we didn’t move. So much more was at stake. Then another voice and another and another until 12 pilots checked in and maintenance ran out to receive them.”

McGovern described the feeling as “jubilation,” but the wing commander quickly ground them.

There were many more nights following the same pattern, with Feest taking to the air while McGovern anxiously awaited hearing a call in over the radio. Each mission, he returned. During Operation Desert Storm, the F-117As flew 1,271 sorties, achieving an 80% mission success rate, and suffered no losses or battle damage.

For the Air Force Veterans, the 50/50 chance turned out to be a worst-case scenario that fortunately never played out.

Feest poses for a photo in front of the F-117 Nighthawk dedicated to him on Holloman Air Force Base, N.M, Dec. 11, 2019. U.S. Air Force photo by Airman 1st Class Quion Lowe

Both returned from deployment in April 1991, Feest arriving April 5 and McGovern arriving April 15. A few months after they returned, Feest and McGovern received life-changing news: she was pregnant. Their oldest son was born in 1992. They had another son in 1995.

Feest went on to a successful Air Force career. He later commanded an F-117 squadron, a training group, a flying wing in the Middle East, and a numbered Air Force. He retired as a major general in 2012 after serving as the commander of the Air Force Safety Center He now serves as executive director of the National Commission on Military Aviation Safety.

McGovern commanded at both the squadron and group levels as well as serving as a speechwriter to the Secretary of the Air Force. She retired as a colonel in 2005 after serving as chief of the Logistics Division, at Air Combat Command.

The Air Force retired the F-117 from active service, but pilots from the Air Force Test Center still fly them for limited research activities. The stealth technology used in the F-117 led the way for future aircraft like the B-2 Spirit, F-22 Raptor and future B-21 Raider.

Want to see the view Feest saw? Check out the National Museum of the Air Force’s F-117 virtual cockpit.