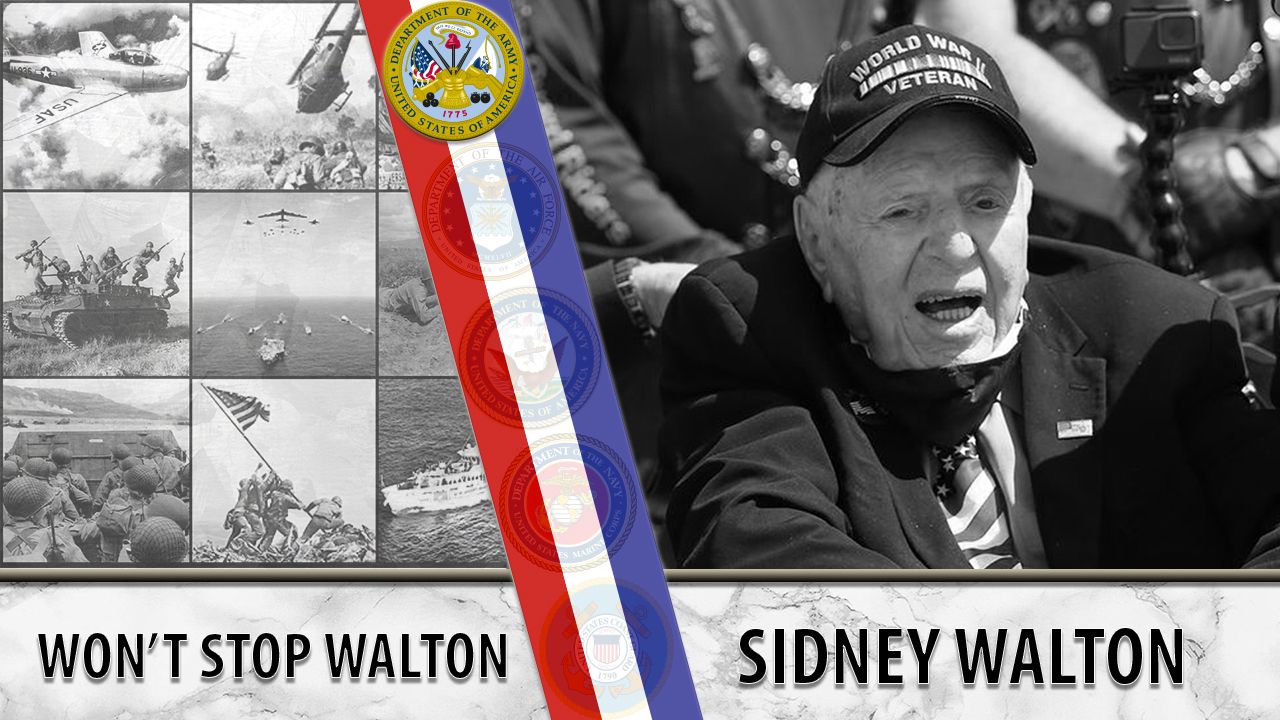 Sidney Walton regrets not having met Civil War Veterans during his youth. Now, as one of the few remaining World War II Veterans, he is on the move so that any American can meet him.

Sidney Walton passed up every opportunity to meet Civil War Veterans during his youth. He would forever regret those decisions.

Born in Manhattan, New York, on Feb. 11, 1919, Walton joined the U.S. Army at the age of 22, raring to fight the Nazi regime. He enlisted in March 1941, nine months before the U.S. formally entered World War II. Being Jewish-American, Walton held a personal grudge against Hitler and his anti-Semitism. In 1944, he learned he would be shipped out to Europe to take part in what we know today as the Battle of the Bulge.

Unfortunately, Walton missed out on the opportunity to fight in the European theater. Before his shipment date, he broke his ankle and had to stay behind for recovery. Once his ankle healed, he was reassigned to the China-Burma-India (CBI) Theater where he served as a medic. Remaining in the CBI up to the war’s end, he served in the 34th Infantry, 8th Division, and eventually rose to the rank of corporal.

After the war ended, Walton lived a life full of travel and adventure. He studied at Yale University for graduate school and met his wife through a blind date. He then went on to teach geology at Duke University and North Carolina State University. Walton eventually went to work as a civilian at an Air Force base in Maine and, later, a job in pollution control for a Naval Air Station in San Diego. Walton also traveled abroad, visiting over 30 different countries. He eventually retired in the early 1980s.

For a time, it seemed probable that Walton would settle down in San Diego for the remainder of his life. Yet he remained frustrated by not having met Civil War Veterans during his youth. Grappling with this childhood regret, Walton decided to make amends with his past. He resolved to give Americans the chance to meet a World War II Veteran before it became too late.

Walton wanted to bring awareness to the dwindling number of World War II Veterans, so he embarked on another journey. In April 2018, at the age of 99, Walton set off to visit all 50 U.S. states, naming his journey the “No Regrets Tour.” So far, Walton has met multiple state governors, two heads of state and thousands of Americans around the country.

Though a journey marked with personal stakes, Walton’s trip was full of fun surprises. At the 2020 Super Bowl, Walton joined three other 100-year-old Veterans to flip the ceremonial pre-game coin. Just a week later, for his 101st birthday, Walton headed to New York City where the city hall received him for a birthday salute. New York City Mayor Bill de Blasio followed the festivities by declaring Feb. 11 “Sidney Walton Day.”

In 2019, VA reported that only 389,292 of the 16 million Americans who served in World War II were still alive. With the numbers of World War II Veterans constantly dwindling, Walton stands firm in his desire to give every American the chance to meet one before they regret it. To see which state he is currently at, visit his website at https://gosidneygo.com/.