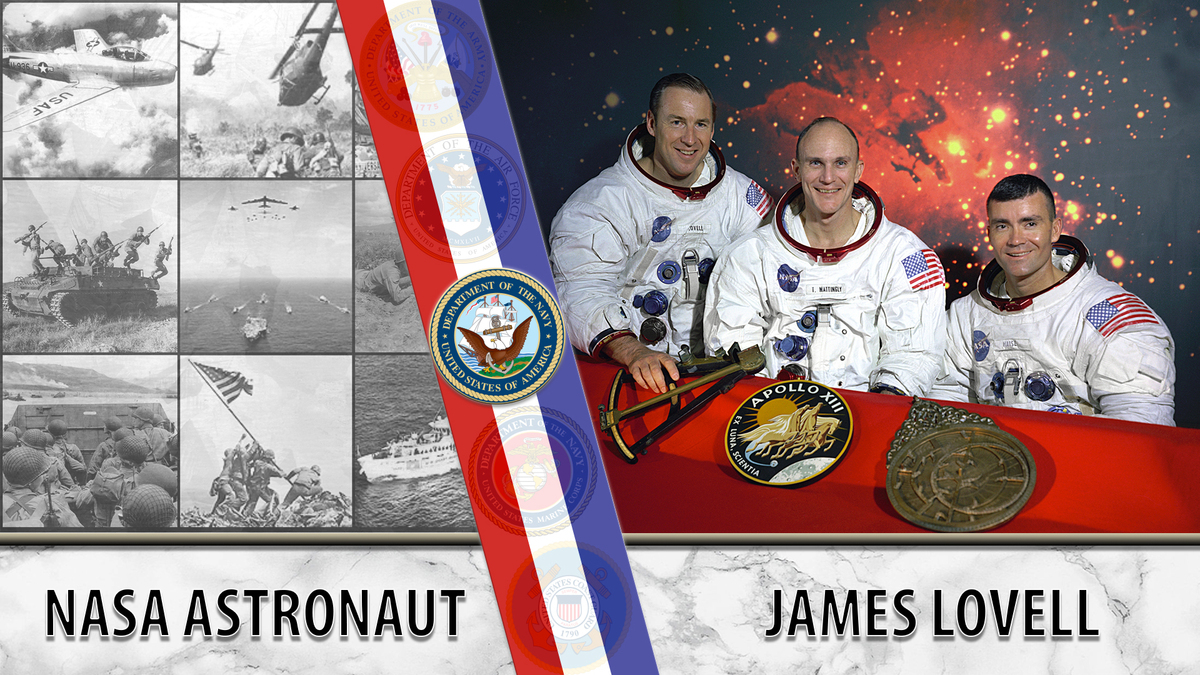 In his decades-long career, James A. Lovell Jr. served in the U.S. Navy, and was most notably known as an astronaut in NASA’s Apollo 8, 11 and 13 missions.

James A. Lovell Jr. was born in Cleveland, Ohio, in 1928, but it was five years later that he and his mother moved to Wisconsin after his father died. There, the space and rocket science fan pursued Boy Scouts, and in high school earned the Eagle Scout award. That love for science and engineering led Lovell to the University of Wisconsin in 1946, where he studied engineering. He completed a BS at the U.S. Naval Academy in 1952.

After commission into the U.S. Navy, Lovell was one of the 50 graduates (of 783) selected for naval aviation – the path to becoming a pilot. In 1958, Lovell graduated from Naval Test Pilot School, where he learned how to land jets on aircraft carriers at night and general maneuvering. A few years later, his piloting skills and bravery caught the eye of NASA recruiters who were recruiting from the Navy aviation program.

In September 1962, NASA selected Lovell for astronaut training and the Gemini 7 mission, which concluded in 1965. His success there led Lovell to command the Gemini 12 mission, with Edwin “Buzz” Aldrin as pilot in November 1966. Later, he was part of the crew on Apollo 8, the first mission to have a spacecraft leave the low orbit of Earth and reach the Moon. The Apollo 8 mission made history by attracting more than one billion views on television and radio listeners combined. The crew concluded their mission on Dec 27, 1968.

The Apollo 13 patch and insignia reads: “Ex Luna, Scientia,” which means “From the Moon, Knowledge,” a motto he readily embraced. But it was the Apollo 13 mission – Lovell’s fourth and final NASA operation – that changed his life. That mission again led Lovell to the moon – the first person to fly to it twice. And while that event captured the imaginations of millions, it was the fraught conditions and potential for disaster that gripped the nation on its return. Damaged electrical insulation in some wiring led to a spark and tank explosion, causing loss of oxygen and electrical power in the Command/Service Module. It was Lovell who eventually piloted the lunar module back to Earth on April 17, 1970.

Lovell retired in 1973 and joined the Bay-Houston Towing Company, and became President and CEO in 1975. Before retiring in 1991, he also served in executive positions and on the Board of Directors of other Houston companies. Somewhere throughout all this, Lovell found time to co-author multiple bestselling books about Apollo 13, including on that served as the framework for the blockbuster movie, Apollo 13. For his career, Lovell is honored in the National Aviation Hall of Fame, and in 2010, the North Chicago Veterans Affairs Medical Center was renamed to the Captain James A. Lovell Jr. Federal Health Center.