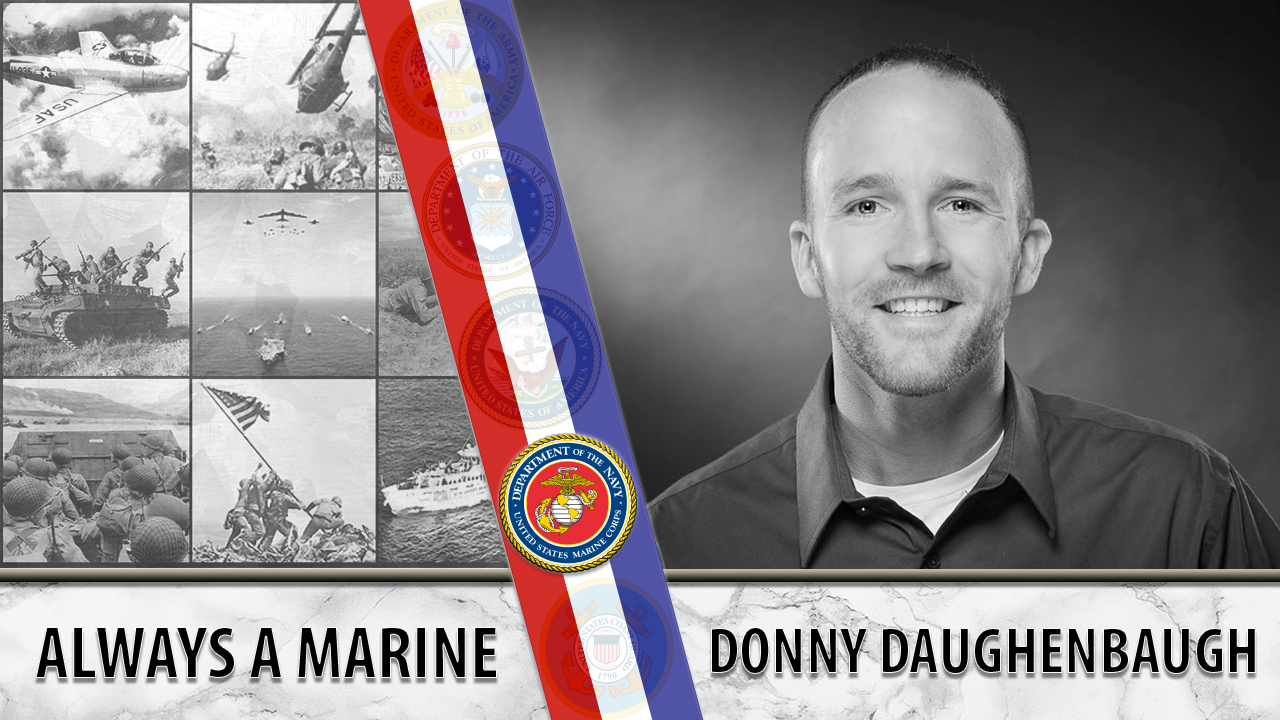 After leaving service, Marine Corps Veteran Donny Daughenbaugh joined the Coalition to Salute America’s Heroes as a spokesperson and VP of field operations.

Donny Daughenbaugh enrolled in the Reserve Officers’ Training Corps (ROTC) during high school in Des Moines, Iowa. He joined the Marine Corps Reserve after graduating but almost did not complete basic training. “Not quitting was probably my best decision,” he said. “Once you’re a Marine, unless you do something really stupid, you are always a Marine.”

Following basic training, Daughenbaugh worked as an apprentice for a carpenters’ union in Des Moines. In June 2004, he was called to active duty at Camp Pendleton, California, and deployed to Iraq in September. “We were conducting Operation Phantom Fury,” he recalled, “and it was hot. We began to take casualties from improvised explosive devices (IEDs), and vehicle borne explosive devices (VBEDs). We were getting shot at all the time.”

In October 2004, in Mahmoudiyah, Daughenbaugh was on a night foot patrol conducting vehicle searches. During one inspection, an irate driver sped off, but began firing his AK-47 when the soldiers tried to stop him. One of the bullets hit Daughenbaugh in the face, breaking his jaw and severely damaging his nerves. He was sent to a hospital in Landstuhl, Germany, for surgery. His jaw was wired shut to heal the break, with the bullet left in place, since it was too close to vital nerves to be removed.

After recovering, Daughenbaugh returned to the U.S. and was medically discharged, but found transitioning back to civilian life difficult. He dealt with intense headaches, seizures, and post-traumatic stress disorder (PTSD).

“It feels like you’re wearing a mask. A mask that says, ‘I’m ok’ or ‘It’s not that bad,’ so I don’t have to seem like I’m complaining if I give a more honest answer,” he wrote, in a 2018 blog post. But things changed when Daughenbaugh became involved with the Coalition to Salute America’s Heroes. After attending an event in Des Moines, he began volunteering with the organization, providing outreach to wounded Veterans. “My struggles and challenges and issues have enabled me to be a stronger advocate for other injured Vets,” he said. “An injury is very disabling when it happens, but it enables you to do new things.”

Currently, Daughenbaugh serves as the vice president of field operations for the Coalition. His areas of responsibility include outreach at VA hospitals, peer-to-peer support and addressing the financial needs of wounded Veterans. He also works as a spokesperson, encouraging Veterans to take advantage of their benefits and to get involved in Veterans organizations.