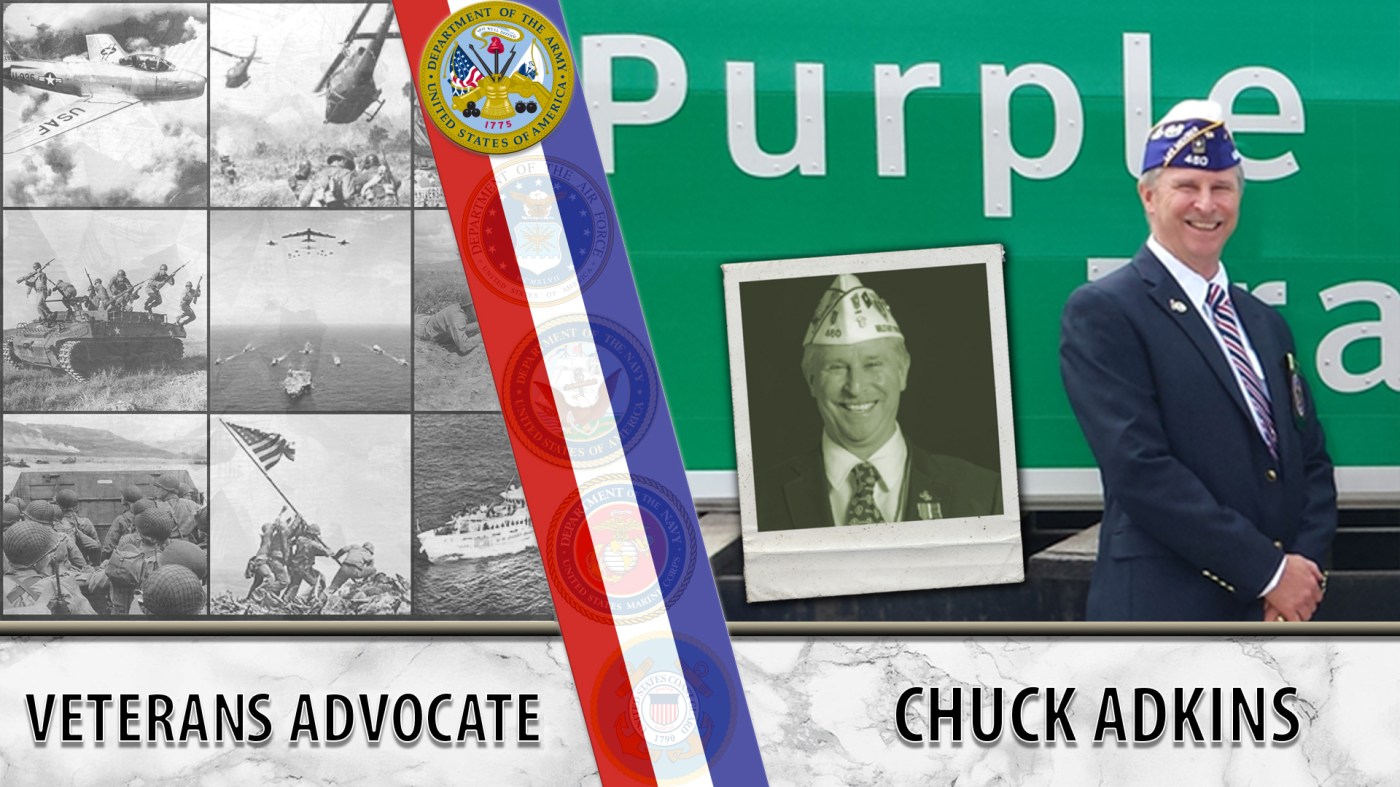 Charles “Chuck” Adkins had retired from the Army in 2001 but was recalled when his skills as an army logistician were needed. After serving in Operation Iraqi Freedom and suffering a Mild Traumatic Brain Injury (MTBI), Adkins became an advocate for Veterans who did not receive Purple Hearts. He later joined the organization, Military Order of the Purple Heart.

Charles “Chuck” Adkins had always wanted to be in the military. Growing up in Little Rock, Arkansas, Adkins heard stories of his family’s service in the Army and Navy. He fulfilled a personal dream when he joined the Arkansas National Guard in college.

In a 2019 interview with The Arkansas Democrat-Gazette, Adkins remarked, “Everyone who was my age had seen [the movie] Patton, and I said that I wanted to be the next Patton.” During his time in Germany, he rose from quartermaster to company executive officer.

Adkins retired in 2001, but an old friend caught him off-guard in November 2005. “I got a call from a captain who I’d worked for at Fort Bragg, and he said, ‘Major Adkins, welcome back to the Army,'” Adkins remarked. “I said, ‘Tell me you’re kidding.’ He said, ‘We’re short officers… I saw a Major Adkins pop up, and I figured it had to be you, so I wanted to be the one to tell you.'” He had been reinstated for active duty based on his skill as an army logistician.

After training, Adkins became the Commander/Team Leader of the Military Transition Team (MiTT) 0413 in the Forward Operation Base Poliwoda in Balad, Iraq. MiTTs served as combat advisors to the Iraqi Army. They provided and taught non-commissioned officers, as well as others, with anti-insurgency tactics and training to help create an independent Iraqi army. Adkins’ assignment was to train and equip the 3rd Battalion, 1st Brigade, 4th Iraqi Army Division. He also served as Commander/Team Leader of MiTT 0142 at India Base in Fallujah.

On Dec. 27, 2006, Adkins’ team was moving through Al-Karmah when the convoy came under attack by a Vehicle Borne Improvised Explosive Device (VBIED) and a buried IED. Adkins was sitting in the front passenger seat when the vehicle drove over a pothole full of water. The IED in the pothole exploded, killing eight soldiers and wounding four others. Adkins helped evacuate the wounded and returned to the scene where a second IED exploded and injured every man in his High Mobility Multipurpose Wheeled Vehicle (HMMWV). During this incident, Adkins received a mild traumatic brain injury, as well as numerous cuts from the explosion. However, he did not receive the Purple Heart due to the mildness of his TBI.

The injury requirements deemed worthy of a Purple Heart vary for each branch of the military. By the Army’s account, Adkins and his soldiers were not applicable. With some assistance, Adkins and his cohorts received Purple Hearts five years after the explosion.

When Adkins officially retired from active duty in July 2009, he accepted a Department of the Army Civilian (DAC) position as the Battalion Security and Operations Officer for the Army Field Support Battalion in Fort Riley, Kansas. In 2013, he retired from the position and returned to Arkansas.

Adkins continues to serve Veterans through the Military Order of the Purple Heart and works with other Veteran Service Organizations, such as the Veterans of Foreign Wars, the Military Officers Association of America and the Arkansas Department of Veterans Affairs.

“I always remembered what the Purple Heart did for my father-in-law after his service,” Adkins said of his retirement. “When I was awarded mine, I thought of him. Our charter is not just for those who received the Purple Heart, but for the benefit of all Veterans to ensure they receive benefits that they have earned.”