Isabelle Cook: In Times of War 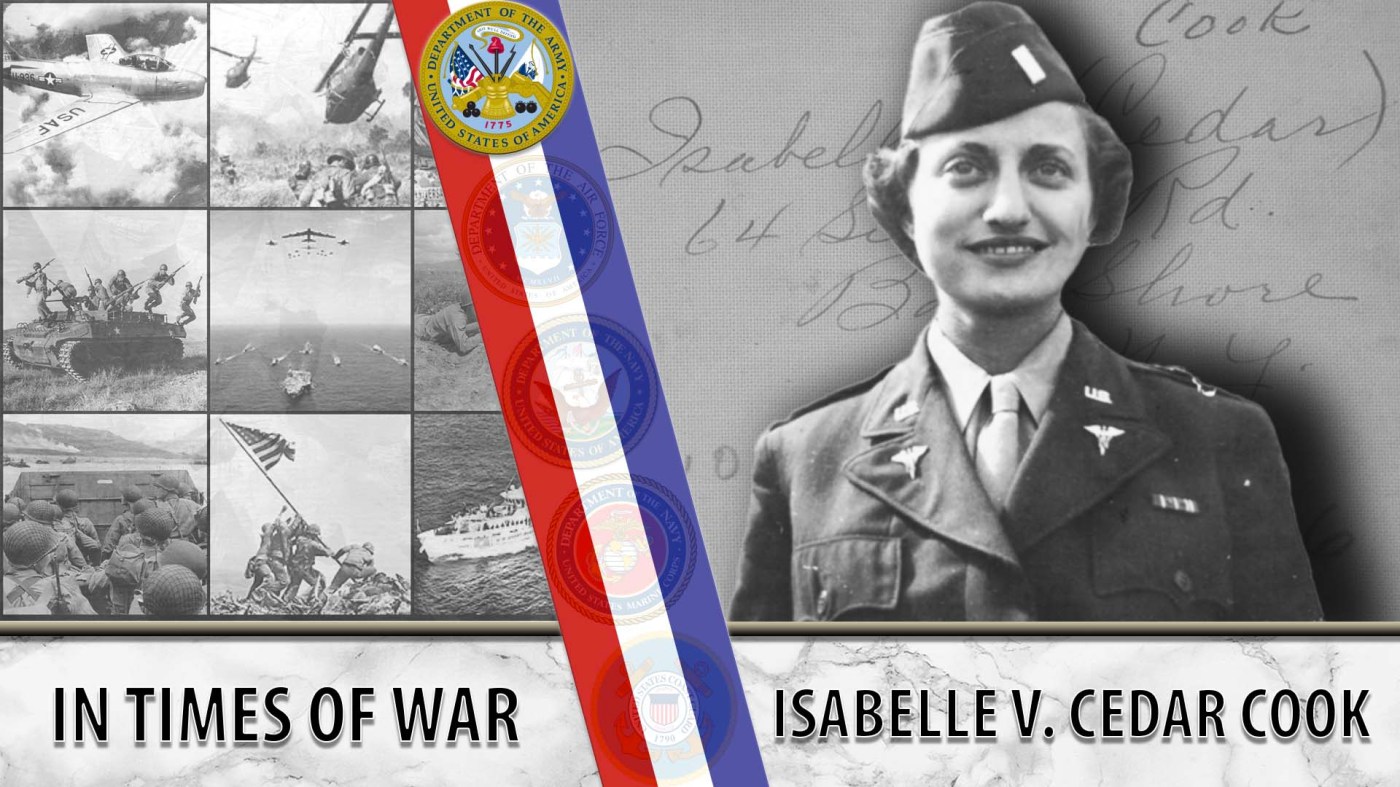 World War II Veteran Isabelle Cook witnessed the comings and goings of thousands of soldiers as a nurse, inspiring her to write her book “In Times of War.”

Isabelle Cook had just graduated from Mount Sinai Hospital School of Nursing when World War II began in Europe. The U.S. Army asked Mount Sinai to form a 1,000-bed hospital for overseas service. Cook felt it was her duty to join the Army and help care for soldiers overseas, so she volunteered for the project immediately.

Once called for service in September 1942, Cook travelled to Camp Rucker, Alabama, for basic training, which lasted about six months. She then received orders to go overseas and was sent back to New York to be processed for deployment at the port of embarkation there.

Cook visited home the day before her departure and informed her mother of her enlistment. Her mother did not receive the news well and was shocked that her daughter was going to take part in a war across the Atlantic. Cook reassured her mother, arguing that it was her duty to serve her country. The next day, she boarded the Louis Pasteur, not knowing where she was headed. On May 5th, 1943, she arrived in Casablanca, Morocco.

Cook spent three months in Casablanca while the Germans fought in Tunisia. Her hospital was being set up to hold over 1,000 beds. Once the Germans were defeated in North Africa, she was selected to join an advance party headed to serve in Mateur, Tunisia. The group travelled 1,500 miles in an open truck, sleeping in pup tents and enduring unbearable heat.

When Cook arrived in Mateur, she noticed it had been bombed out and that people were living in caves. Her unit occupied abandoned French army barracks that were being used by the Germans as hospitals. They took eight days to set up the facility. Afterwards, she was assigned to be a housekeeper, a role she had no experience in but approached with an optimistic attitude. By this time, the Sicilian campaign had started, and patients began streaming in less than five days after they had set up the hospital. In addition to treating wounded German prisoners of war, the facility served as an evacuation hospital for more severely wounded soldiers.

Cook’s unit received about 2,000 patients and was forced to open a second 1,000-bed hospital using field tents. She and the other nurses had to work double shifts in extreme heat. During the year she spent in North Africa, her hospital saw about 5,000 patients.

Cook was then sent to “Orange Grove,” outside of Naples, Italy. There, she treated French colonial troops, Arabs and Senegalese. There were no interpreters and Cook recalls subpar sanitary habits. American soldiers who were wounded from the Anzio beachhead were also brought in. She spent about nine months in Italy and was occasionally able to visit local sites, which she enjoyed.

After her time in Italy, Cook was sent to France following the successful Allied invasion of the country. She went to Marseille and then Aix-en-Provence. Up until this point, Cook had been staying in tents, but in Aix-en-Provence, she stayed in a resort hotel. Later, on May 7th, 1945, Cook was able to celebrate in the Victory in Europe Day parade.

Though the fervor of war was dying down, the military needed more nurse anesthetists, and Cook was among those chosen. She spent six weeks in Paris studying anesthesiology and traveling in her spare time. She then returned to Aix-en-Provence, where her unit received orders to close their hospital on August 27th, 1945.

After 28 months overseas, Cook was able to return home. She recalls her deployment as being a wonderful experience. Nevertheless, she was grateful to be reunited with her family and described the Statue of Liberty as the “best sight” she had ever seen. She was discharged from the Army in December 1945.

Cook went on to write a book about her experience in World War II called, “In Times of War.” Describing her motivations for writing the book, she said:

“In times of war, things are very different than they are at other times. Relationships don’t last very long because one day there’s a soldier here and the next day – in combat and sometimes he’s gone with them for several weeks or months and then suddenly they – you never hear from them again. And you don’t know whether they were killed in action, whether they were wounded or what happened to them. So you’re always left with that feeling what – what could have been but wasn’t.”