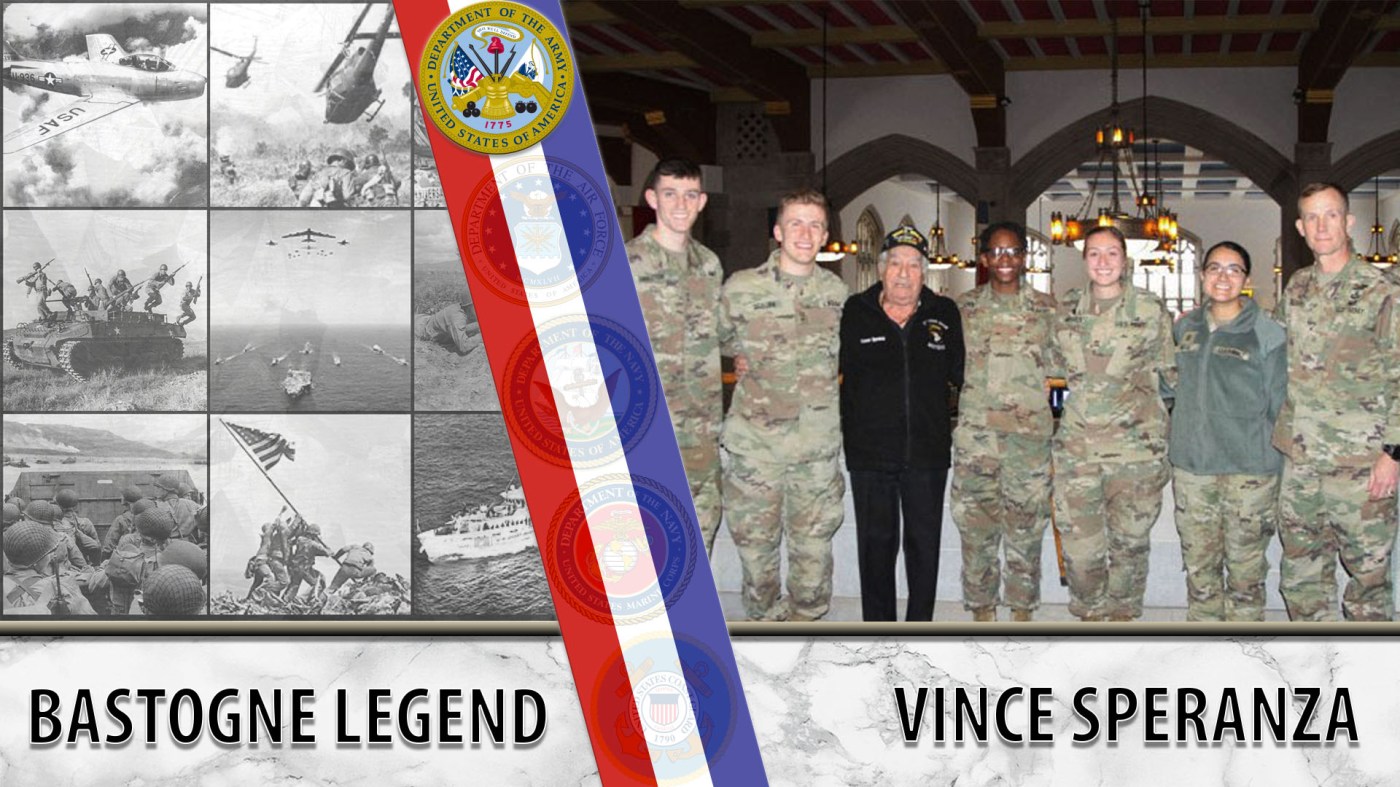 World War II Veteran Vince Speranza is a living legend in Bastogne, Belgium, with his own beer named after him for his service in the war.

Army Veteran Vince Speranza served in the 101st Airborne Division, 501st Parachute Infantry Regiment. He survived the brutal winter of ’44/’45 and the Battle of the Bulge, one of the deadliest battles in World War II.

Speranza tells many stories of his time in World War II in his book, Nuts! A 101st Airborne Division Machine Gunner at Bastogne. He fought in combat as a machine gunner, freed Holocaust survivors and became a local legend for his selflessness.

Fighting in the war taught Speranza the dark reality of war and life. While recounting the lessons he learned, he said, “There’s still a hostile world out there. We want world peace, but it’s not there.” Participating in combat and war, Speranza shares that he learned “Freedom’s not free. Someone will always have to pay the price and thank God we still have men like this who are willing to pay the price to keep America free.”

In his book, Speranza also tells firsthand accounts of rescuing Holocaust survivors from concentration camps. He describes encountering the scent of burning flesh, only for the smell to get stronger and more gruesome as he approached the camp. They met many victims who appeared awfully close to death and experienced a variety of reactions to their meeting. Some survivors kissed him on his boots as they crawled up to him on their elbows and knees and some could only groan in pain while he carried them. Speranza recalls that despite victims’ dire need for food, he was instructed to not feed them, as they required special diets and to not interfere.

While Speranza’s book and actions to free those interned during the Holocaust are admirable, his true claim to fame is a result of his actions at the Battle of the Bulge. The Battle of Bulge has a reputation for being gruesome, but more importantly, it was a turning point for the end of the war in Germany. At the end of the battle, the uninjured Speranza tended to the many other injured soldiers. There had only been one doctor and nurse left as the rest had been murdered by Nazi soldiers.

Speranza had a deep desire to help out and contribute as best as he could. He became known for being the morale booster among the other soldiers, with a reputation for embracing the injured soldiers and always asking how they were doing. Sadly, his assistant machine gunner had been injured with shrapnel in both of his legs but assured Speranza that he was doing well. Determined to do everything he could, Speranza got his assistant to come up with something and was sent to town to retrieve him some beer.

Upon arriving at one of the few taverns that still had a bar, Speranza had nothing but his helmet to fill up with beer. Everyone was happy to indulge and Speranza was sent back for a refill to which he happily went. However, when he was ready to leave the tavern, an officer spotted him and instructed him to put his helmet on and get out but the local people of Bastogne, Belgium, were delighted to witness his commitment to serving his fellow soldiers.

To this day, Speranza is a local legend in the town of Bastogne and has a beer named after him, “Airborne Beer.” In Bastogne the beer is served in helmet shaped bowls in his honor.