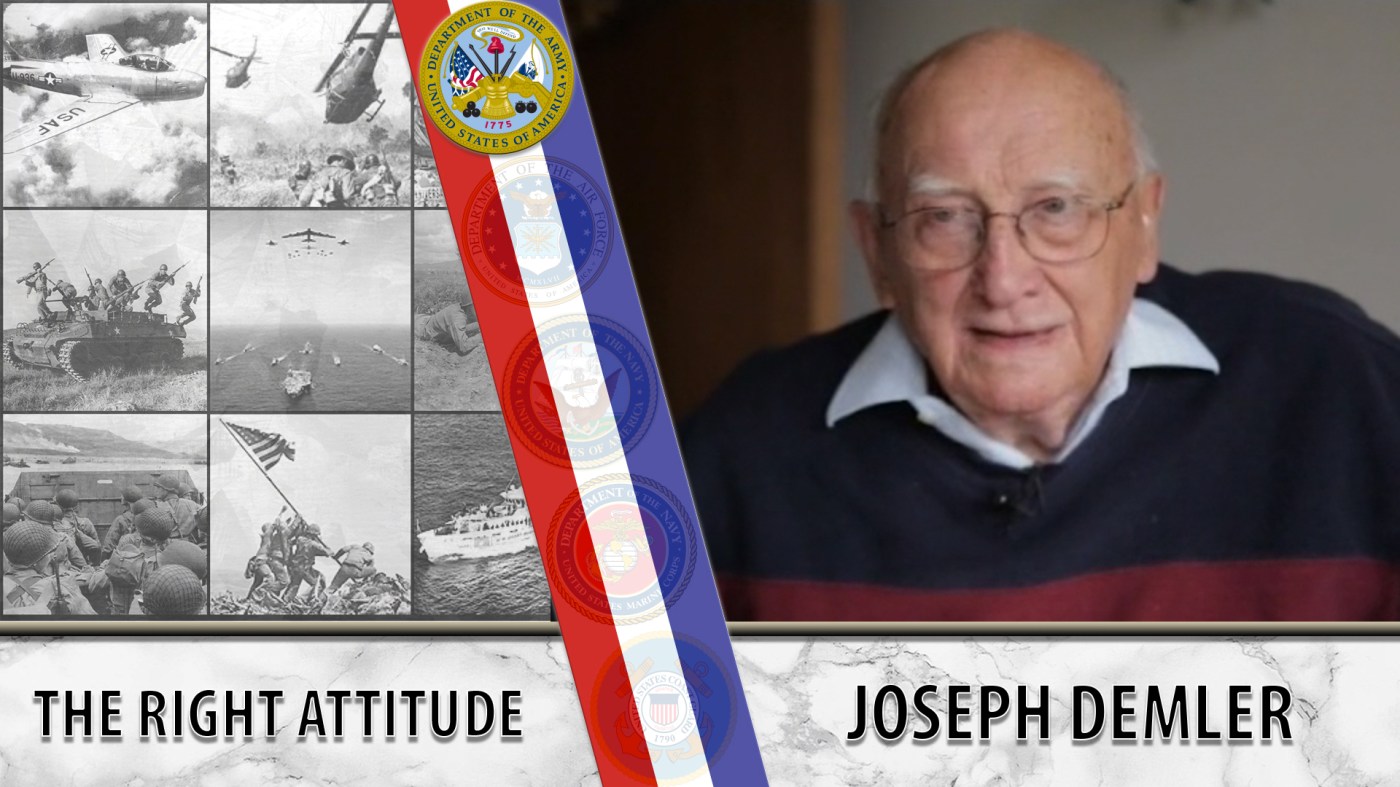 World War II Veteran Joseph Demler became a Nazi prisoner of war and lived under miserable conditions. Even so, he remained positive throughout the experience.

Joseph G. Demler graduated from high school in June 1944. Ten days later, he received a draft letter to serve in the U.S. Army. With few options, the 18-year old packed his belongings and headed to Camp Blanding, Florida, for 17 weeks of basic training. After completing his training, Demler went to Camp Shanks, New York. There, he boarded a convoy and set sail for Europe on Nov. 22, 1944, leaving for a journey that put his resolve to the test.

Demler arrived in Marseille, France, one day after his 19th birthday. Just weeks later, on Dec. 26, 1944, Demler and his comrades were sent to reinforce the 35th Infantry Division, which was devastated by the early fighting in the Battle of the Bulge.

His time with the 35th Infantry Division did not last long. On Dec. 29, 1944, Demler and a few soldiers stood at an outpost when a German tank fired at the building. The blast sent Demler flying into the air. After realizing they were attacked and could not receive aerial support due to poor weather conditions, he and his fellow soldiers surrendered.

The future looked bleak for these Nazi prisoners of war (POWs). Rumors that Hitler wanted to kill all POWs quickly spread among the captives. As the Allied soldiers filed out of the outpost, German soldiers took all their personal belongings. The German guards then marched Demler and his fellow captives toward Stalag 12A, one of Nazi Germany’s largest POW camps.

The journey toward the prison camp was rife with filthy and dangerous conditions. While stopping in the cities of Prüm and Gerolstein, Demler was forced to help repair destroyed German railroads at night. His guards’ cigarette smoke often attracted Allied bombers to strafe his location, jeopardizing Demler’s life several times. Furthermore, his captors only fed him small portions of bread and cheese, and his straw beds were crawling with lice. Demler’s miseries only worsened once the railroads were repaired. One night, the Germans packed Demler and his comrades into compact railcars set for Stalag 12A. The railcars were so crowded that no one could sit down, and they had only a bucket to serve as bathroom facilities. For nearly a week on the train, Demler and the others went almost entirely without food or water, sustaining themselves with whatever snow they could collect. When the train reached Stalag 12A, Demler developed a severe case of pneumonia.

Demler’s health worsened while staying at Stalag 12A. The Germans repeatedly stole Demler’s rations, leading to his malnourishment. Fellow prisoners died all around him, reminding him he could be next.

Allied troops liberated Stalag 12A in late March 1945. By then, Demler weighed around 70 pounds, and the outlines of his bones were plainly visible. Awed by Demler’s physical condition, John Florea with LIFE Magazine took a picture of him. Demler was treated at a field hospital and then shipped to the 48th General Hospital in Paris. The military later flew Demler to numerous hospitals in the United States. After a long recovery, Demler was discharged in November 1945.

Demler went on to live a comparably more peaceful life. After being discharged, he settled in Wisconsin. He soon met the love of his life, Therese, and they got married. Demler served 37 years with the U.S. Postal Service. He also helped found an Honor Flight hub in Milwaukee, organizing trips for local Veterans to visit memorials in Washington, D.C.

Despite his harrowing ordeal as a Nazi POW, Demler reflected positively on the experience in his later years. In an interview with the Veterans History Project, Demler attributed part of his survival to not having “a defeated attitude.” “You got to think positively, and all my life I’ve done that,” he said.